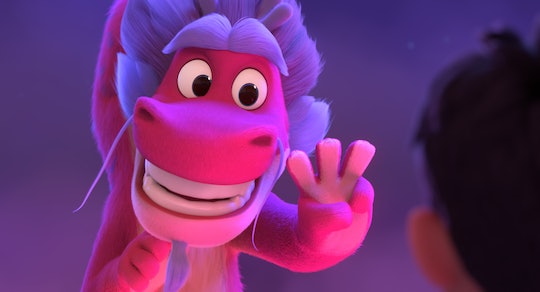 Friendship and magic abound in this whimsical film.

If your family loved Aladdin, you’ll want to ensure they don’t miss Sony Pictures Animation’s new movie Wish Dragon, which is based on a similar genie-in-a-bottle premise. But instead of a blue-hued spirit in a magic lamp, Wish Dragon features a colorful and comical dragon capable of granting wishes to whoever finds the jade teapot he calls home.

Din is a hard-working college student who has some big dreams. Unfortunately, he doesn’t have a lot of money to help make those dreams happen. One night, Din accidentally unleashes Long, an all-powerful dragon spirit who only needs to grant one more person three wishes before he earns his freedom, from a jade teapot.

Because Long is hoping to get his last wish-granting job over and done with as soon as possible, he encourages Din to make quick-and-easy wishes for material goods. But Din already knows what he wants: To reunite with his childhood best friend Lina, who now lives as a model and actress amongst Shanghai’s wealthy elite.

Of course, reconnecting with Lina isn’t quite as easy as simply making a wish. And as Din soon learns, the ability to wish for anything forces you to define what really matters.

A recently-released trailer for the Wish Dragon shows viewers a sneak peek at Din and Long’s first meeting and the hilarity that ensues when Din tries to figure out how a dragon as large as Long can fit in such a tiny teapot.

Although Wish Dragon enjoyed a theatrical release in China, you won’t find the film in theaters in the United States. Instead, the animated comedy will be available exclusively to Netflix subscribers. Stream the film any time — or as many times as your young ones want — after it drops onto the streaming platform later this summer.

Grab your popcorn because Wish Dragon comes to Netflix on June 11. The laugh-inducing flick is the perfect pick for a summer family movie night.