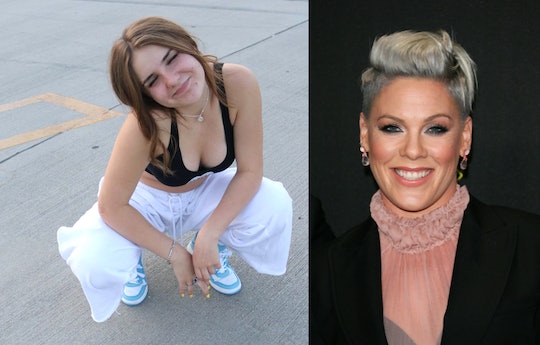 “Why do we shame people for that? Pictures of teenagers in bikinis having fun are not sexual. They’re only sexual if you view us that way.”

YouTuber Piper Rockelle has responded to Pink’s assertion that the 14-year-old is being “exploited” by her parents. The “What About Us” Grammy winner and mother of two accused Piper’s mother of exploiting her after the teen shared photos of her in a bikini on her Instagram account. Piper quickly shut those claims down.

Piper is a 14-year-old musician, actor, and social media star with more than 4 million followers on Instagram, an account that is managed by her family. She often posts photos of herself, sometimes Disneyland, posing for photo shoots, or eating Krispy Kreme. And in mid-August, Piper posted a photo of herself posing in a bikini with the caption, “too pool for school.”

Pink, however, appears to have taken issue with it. On Twitter, the “So What” singer accused her parents of exploiting their teen daughter. “How many kids like Piper Rockelle are being exploited by their parents?” Pink tweeted on Aug. 29. “And at what point do the rest of us say...’this isn’t OK for a 13-year-old to be posing in a bikini whilst her MOTHER takes the photo?!?!’”

While some of Pink’s fans agreed with her take, others pointed out that Piper is free to wear what she wants. Two days later, while speaking to TMZ, Piper weighed in on the conversation and said isn’t forced to do or post anything. “The first thing I want everyone to know is that my mom doesn’t make me do anything,” she told TMZ. “Quite the opposite, I’m a kid who had a dream and my mom is amazing enough to help me live it out.”

Rockelle’s YouTube Channel, which has over 8 million subscribers, is full of prank videos, challenges (like where she becomes a lifeguard for a day), and music videos, all of which have millions of views.

“I don’t think Pink has ever seen one of my YouTube videos, because if she did, she’d see it’s just my friends and me having fun and acting like ourselves,” she told TMZ on Tuesday. “The content we make is the kind of stuff anyone can watch.”

And while speaking with TODAY on Aug. 30, Piper defended her decision to take the photos in the swimsuit. “There’s nothing wrong with being in a bikini,” she said. “Why do we shame people for that? Pictures of teenagers in bikinis having fun are not sexual. They’re only sexual if you view us that way.”

Piper and her family are very close, according to Tiger Beat, especially since her mom, Tiffany Rockelle, “raised her on her own.” Tiffany told TODAY that everything she does is in support of her daughter. “Since Piper was a child, she has had a strong love of performing and she has always had a dream,” she said. “So long as Piper wants to do this, and it’s her passion, I’m here for her to follow that dream and protect her.”

Pink has not publicly responded to Piper’s response to her tweet. Romper has also reached out to representatives for the singer for comment.