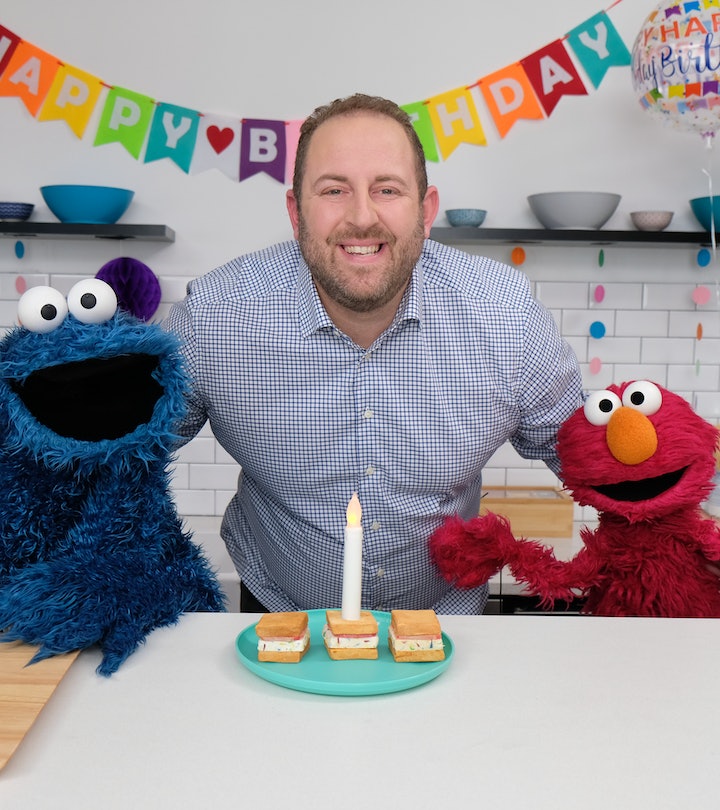 It’s almost Elmo’s birthday! And who better to make a deliciously sweet treat to celebrate Elmo’s big day than Cookie Monster? The cookie connoisseur teamed up with Yummly and Chef Joel Gamoran to make confetti ice cream sandwiches for Elmo’s birthday, which falls on Feb. 3. Thanks to Yummly’s recent partnership with Sesame Street, your children can join in on the fun and whip up their very own batch of confetti ice cream sandwiches by following Gamoran and Cookie Monster’s simple tutorial. So, gather your ingredients, tie an apron on your young helper, and get into the kitchen with these tips from Chef Gamoran on how to best involve kids in food preparation.

While inviting your child into the kitchen to help you cook or bake may sound a bit daunting, it doesn’t have to be. Young children are often naturally eager to help and participate in various activities around the house like cooking or food prep. In fact, Gamoran, who has two children of his own, tells Romper you don’t have to wait until your kids are older to start including them in basic supervised kitchen tasks.

“I find that around 1 year, they can hold a spoon and understand how to stir,” the Cooking Scrappy author shares. “They kinda need to be able to stand to get cooking.”

At just 2-and-a-half-years-old, Gamoran’s son Jonah is already a regular in the family’s kitchen, helping his dad cook breakfast every day. “He knows how to scramble eggs with cheese, make toast, and even bust out pancakes,” Gamoran says. “Cooking to him is not different from painting or playing with Legos, it's a fun activity where he uses all of his senses and creativity.”

Gamoran recommends starting children off with an easy task, something that allows them to feel like they helped without bringing your efforts to get a timely meal on the table to a screeching halt. “Maybe they help make the salad dressing or toss the pasta in the sauce with some tongs,” he recommends. “Even letting them plate their food gives them a sense of discovery and independence.”

Parents will find a number of opportunities to involve their kids when making Gamoran’s confetti ice cream sandwiches. For example, parents can pre-measure the dry ingredients and give children the task of pouring those ingredients into one large bowl and then stirring them to mix. Kids can also help stir the dry and wet ingredients together to form the cookie dough. Later on, kids can help roll out the cookie dough, fold the confetti sprinkles into the ice cream, and arrange a layer of sliced strawberries over the spread-out ice cream.

Once your kids have mastered confetti ice cream sandwiches, dive into some of the other cooking tutorials Yummly and Sesame Street teamed up to make. Additional videos in the series include a tutorial on cranberry hand pies, cauliflower mac & cheese bites, and, coming next month for Valentine’s Day, red velvet heart pancakes. Families can also find a number of other kid-friendly recipes on the Yummly app and website.