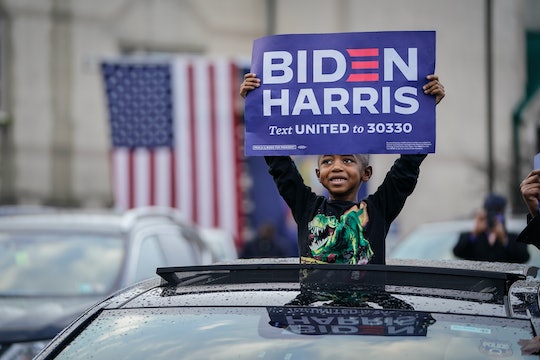 And it's one many adults would do well to remember, too.

Although children can’t vote, their lives are certainly affected by elections — a fact not lost on the new vice president-elect. In fact, in her first speech as America's future VP, Kamala Harris said the election sent children a message. In electing herself and Joe Biden to the White House, Harris stressed that voters had shown children they should dream big and see themselves in roles that perhaps had yet to be filled by people who look like them.

“To the children of our country, regardless of your gender, our country has sent you a clear message,” Harris said in a victory speech delivered Saturday in Wilmington, Delaware. “Dream with ambition, lead with conviction, and see yourselves in a way that others may not, simply because they’ve never seen it before, but know that we will applaud you every step of the way.”

Harris’ election to the office of vice president serves as an especially poignant moment for little girls of color as she is the first Black woman, who is also of South Asian descent, to hold such a senior position in the White House. She noted Saturday that her election would ideally enable more children to see themselves in elected office and positions of power. “While I may be the first woman in this office, I will not be the last, because every little girl watching tonight sees that this is a country of possibilities,” Harris said.

Indeed, many parents of color celebrated Biden and Harris’ election win for how it was likely to change not only how others viewed their children, but how their children viewed themselves and the doors open to them. On Twitter, Mindy Kaling shared that she was “crying and holding” her 2-year-old daughter while watching news of Harris’ election and telling her, “look, baby, she looks like us.”

Across the country in Alabama, state Rep. Barbara Drummond told NBC News her 5-year-old granddaughter had marveled at seeing someone that looks like her win such a high office. "She looked at the TV screen, and she said, 'Mommy, she looks just like me. She's a brown girl,'" the news outlet reported Drummond said of her granddaughter’s reaction to news of Harris’ election.

After nearly a week of waiting and vote counting, a projected victory in Pennsylvania early Saturday morning pushed Biden over the 270 Electoral College vote threshold and effectively made him the 46th president of the United States. Multiple media outlets, including The New York Times have also projected Biden will ultimately win Nevada’s six Electoral votes and could potentially pick up additional votes with victories in Arizona, and Georgia.