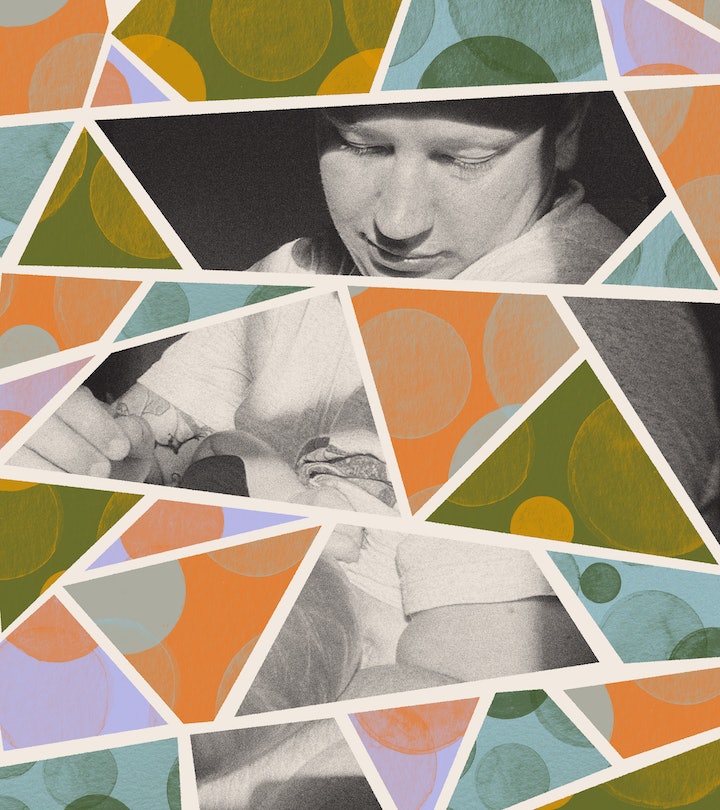 I'm so glad it's over and if I think about that for more than 47 seconds, I'll cry.

There's a photo of me from a year ago, eating a piece of pizza, with my tiny, squishy baby straddling my thigh. They're six months old, eating something too, or trying to, maybe a carrot, maybe one of those mushy rice cracker things. It was notable because until recently they, who felt so huge and communicative and clever, but also so, so small, had lived —thrived, even — off nothing but my milk. In hindsight, my memory fixates on their baby-ish-ness, their sweetness, the magic of watching someone eat their very first bites of food. But those days were hard, too. Living as a near-inseparable unit with a being who has never known any home but you has its downsides.

We were staying at a friend's house, and I remember having conversation after conversation with my spouse about what I needed. How I felt. What we needed to change. Around and around again, every few hours, sometimes every few minutes. The list would start to build up in my head. I've held them for the last X number of hours. I haven't gone to the bathroom by myself since X. How am I going to do X when all they want to do is nurse. I've nursed X times since breakfast.

Those numbers are big. Those lists are real. And I imagine any chest- or breastfeeding parent has tallied them from time to time. The imbalances are real too. And as much as we need articles and memes and real, actual change in the ways that women too often bear the lion's share of caretaking tasks, I'm not a woman, but I am married to one — a gorgeous, lanky non-binary woman who's in love with our child and has blossomed into parenthood like no one and everyone knew they would. She lets me build the baby furniture and fuss over the ins and outs of our baby's routines, spaces, care.

As partners building our family outside of the gender binary — both intentionally and because we cannot help but do anything else — we circle these traditional gender inequities like sharks closing in on a meal. It is dark and scary and dramatic, worthy of a soundtrack at times. These imbalances are real, present in our relationship, but they're also distant and, at this point for us, disembodied. All the stories, articles, advice for moms and dads don't quite apply, rather they make us dysphoric and sad and angry and proud and hopeful all at once.

There are some facts, some incredible data about human lactation. There are things that generally make it easier, more comfortable, more productive. But more than anything it's a relationship.

I haven't chestfed in eight days now, and I'm sure I never will again. Sometimes we don't know, this time I('m pretty sure I) do. I finished nursing my child how I started — resolute in the choice and yet largely unsure of what's next. Some people go into a lactation experience armed with data, accessories, gear. I knew it was important to me, and trusted we'd find our way together. We did, though there are things I wish I'd known then. Since birthing my child, more than a year and a half ago now, I've nursed them for 567 days as well as taken hundreds of hours of lactation courses and sat with, witnessed scores of other parents as they navigate their own experiences. Hours, days, weeks, months of my blood somehow turning into a nourishing substance I rarely saw, but which my life (and theirs) revolved around — all the while desperately trying to understand how this works, why we do it, and what to do when we can’t, don’t, or won’t.

That knowledge is real, important, and yet, the more days I spend, the more I learn, sometimes the less it feels that I know. There are some facts, some incredible data about human lactation. There are things that generally make it easier, more comfortable, more productive. But more than anything it's a relationship. It's messy—literally—wet and soft and warm and strange and exhausting. And I can't write any sort of linear narrative of it because it's not linear, or at least wasn't for me.

Every time I thought to, I took photos, videos of my child nursing. I'm not sure if it was to capture the moment or because I couldn't believe it was happening. I also deeply wanted, needed, to be seen in the experience. Back to the lists. They're supposed to do this every 2-3 hours. If they do it every 2 hours, that's 12 times a day. If we manage to get to 3, that's eight. Eight times a day. Except when it is 10 times in two hours. Except when it's hard to tell where one "feeding" ends and another begins.

Every time I thought to, I took photos, videos of my child nursing. I'm not sure if it was to capture the moment or because I couldn't believe it was happening. I also deeply wanted, needed, to be seen in the experience.

Eventually the noises became too annoying. That's not why I weaned, but every time the slurping, sucking noises grated on my nerves in those last few months, I thought about weaning. I chose to end this part of my life because I saw my spouse meet their body in a way they'd only dreamed of, and I finally let myself feel how much I longed to do the same.

A friend once told me that when she had surgery on her breasts, milk poured out all over the operating table. She had cancer; I do not. She weaned rapidly so that the doctor's could operate, but her body continued to make some milk. Ever since she told me that story, I've fantasized about that moment for myself. I love that. What a way to go.

I nursed my child as a US Postal Service clerk took my photo for a new passport—one marked M, for male, which doesn't feel entirely accurate for me, but comes closer than anything else. My new passport is valid for 10 years, and as I listened to the click of the camera, I imagined forward a decade. It felt special, sacred even, to let milk flow from my body in that moment of gender clarity and affirmation. And I hope, too, that when the time comes for me to have top surgery, they find remnants of the work, the love, the magic that went into chestfeeding.

And I hope, too, that when the time comes for me to have top surgery, they find remnants of the work, the love, the magic that went into chestfeeding.

Sharing about the act, the experience of nursing feels almost too vulnerable. But that's exactly why I choose to—this isn't a clinical activity, and it isn't all that measurable. When all we have is schedules and milestones, tracking apps and online forums, it can feel lonely. Impossible. Unfathomable, even. All narratives of this experience are important — those that are more measured, more clinical, more painful — and those that happen in post offices rather than hospitals, to dads rather than moms, to toddlers rather than babies. Though I am a masculine parent who started taking testosterone while chestfeeding, who eventually chose to wean in order to pursue gender affirming surgery, I refuse to let my story be encapsulated so neatly. Those things are true, but so are the milk-and-sweat-stained sheets of early postpartum, the piranha-like shivers of my child diving for my breast at all hours of the day and night, and the cells gulped into their body through mine as we held each other through the earliest months of their life and my parenthood.

I'm so glad it's over and if I think about that for more than 47 seconds, I'll cry and/or go pinch a few milk pearls out of my nipple, just to remember that it was real.