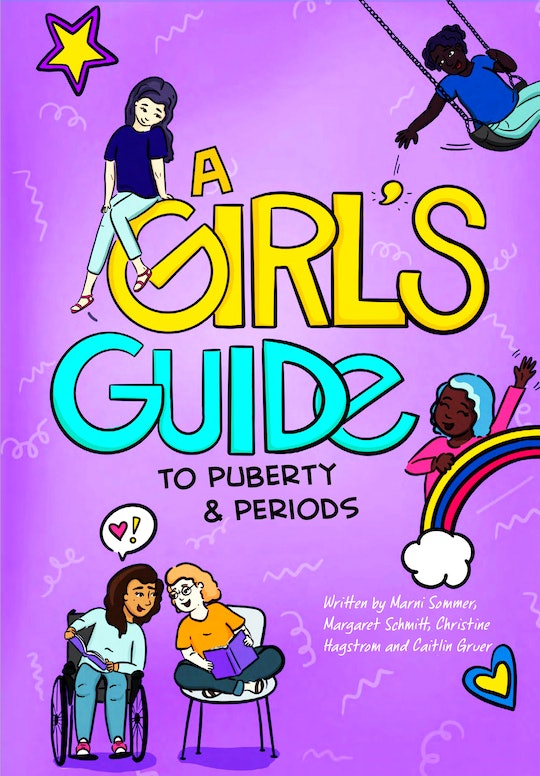 Because it’s hard to know where — or when — to start these conversations!

Marni Sommer has written books helping girls understand puberty and periods all over the world. Cambodia, Tanzania, Pakistan. Until recently, the United States wasn’t really on her radar. But when she and her team at Columbia University’s Mailman School of Public Health began exploring the issue of how and what girls were learning about their own bodies, they soon realized it was time to reconsider. The researchers learned that only half of all states require any kind of sex education, and that even in places with mandatory puberty education, girls still felt unprepared and underinformed.

“There were girls who knew nothing, were really afraid, were shocked, were embarrassed,” Sommer tells Romper alongside her co-author Caitlin Gruer. “It shouldn't have surprised us, but I always think of America as having more resources, having more libraries, having the internet. I always assumed American girls were taken care of but then we realized no, in fact, there is a significant gap in terms of what education and information young people are receiving.”

Sommer, Gruer, and their co-authors — Margaret Schmitt and Christine Hagstrom — hope to bridge that gap with A Girl’s Guide to Puberty and Periods. Though similar in many ways to other puberty books you may have read as a kid (or given your own children), A Girl’s Guide is different.

For starters, the graphic novel includes a refreshing dose of racial, ethnic, family, and body diversity in the girls depicted. Unlike lots of books that include discussions of sex, gender, or or relationships, A Girl’s Guide is pretty singularly focused on what puberty means for cis-girls. While this might be a drawback for folks looking for a comprehensive sex-ed resource, it’s great for those looking for a more focused approach.

But what makes this book really pop? While it was written by four experts, the content was very much led by the teen and pre-teen girls. There’s even an entire section of first-person “My First Period” stories, complete with advice from girls the authors spoke to in their research.

“Having girls' own content was really central,” says Sommer. “In essence, they wrote part of the book.” When they tested the content with girls, Sommer says those parts, like one that breaks down code words and a myth section, ended up being favorites among readers.

Gruer, who worked on data collection among constituencies in New York, said developing that kind of rapport didn’t happen instantly, but the girls eventually opened up to them. “A lot of them told us that no one had ever asked them questions about puberty or periods before,” she recalls. “They don't even talk about it that much with their friends. But once you turn on the faucet and get them talking, you almost can't stop them.”

In addition to reaching out to girls aged 9 to 14, the team spoke with parents and guardians, educators, and non-profit and community health workers. They also made sure to include girls between 15 and 17. “They're the best people to tell us what they wish had been different when they were growing up, what kind of information or support they would've wanted,” Sommer explains. “What information do they think younger people should be getting?”

Speaking with the girls not only shaped the book, but also prompted the team to create a web series of the same name. “Whenever we asked what would be the best way to get information to girls about these topics, every time at least two groups came up with a YouTube campaign and came up with videos,” says Gruer. That campaign features Maya, a cartoon girl explaining various aspects of puberty, and “Super Flo,” the “Menstruation Super Hero” who attempts (unsuccessfully) to speak in rhyme to make her advice memorable.

Of course, the process was educational for both the girls and the researchers. Gruer was particularly tickled by some of the new terms she learned for menstruation. “Shark Week,” “TOM, shorthand for time of the month,” and “Elmo” (maybe because, like a period, Elmo is red and sometimes annoying?). “I generally consider myself quite a young person who understands social media,” Gruer laughs. “And they taught us about things that we kept having to be like, ‘What? Could you explain that again?’ It was very informative.”

Of course, when it comes to coaching your own child through puberty, caregivers can feel overwhelmed and unsure of themselves. But Sommer and Gruer encourage adults faced with this daunting task to start early and take it one step at a time.

“You give the kid a book and it opens a conversation,” says Sommer. “It creates an opportunity for that parent.”

“You don't have to know all the answers,” Gruer adds, “you just have to start the conversation and keep it going.”

A Girl’s Guide to Puberty and Periods is available on Amazon or through the book website.