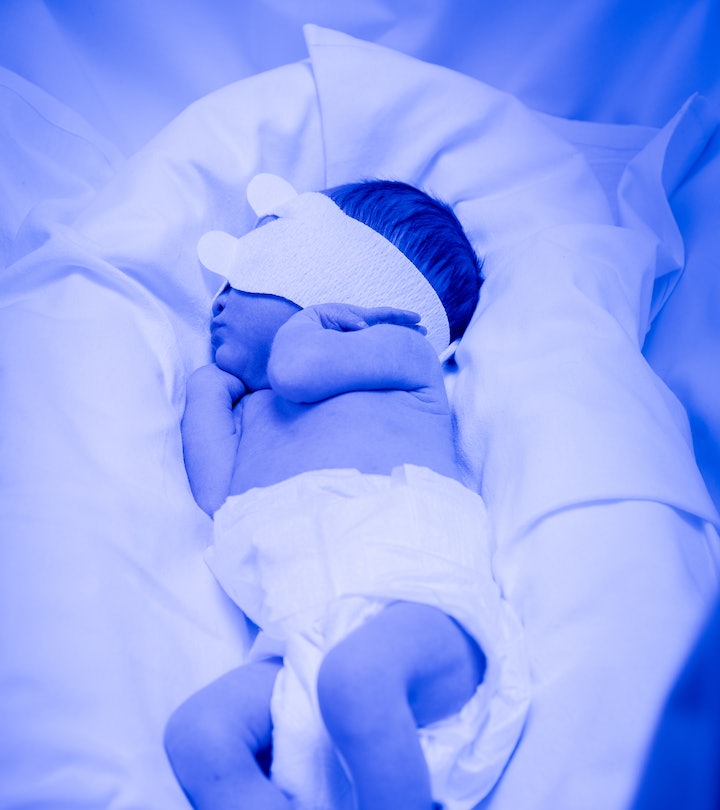 The new guidance is based on eight years of new research.

For the first time since 2004, the American Academy of Pediatrics (AAP) updated its guidance on management of hyperbilirubinemia, a build-up of bilirubin, a yellowish pigment that is made during the normal breakdown of red blood cells and a common cause of jaundice in infants. While similar in many ways to previous recommendations, the new guidelines come after more than eight years of research, which suggest that bilirubin does not cause toxicity unless it reaches higher levels than previously thought. Here’s what parents need to know.

Jaundice is extremely common in newborns, but can sometimes be dangerous.

The new guidelines, released in early August in the journal Pediatrics, explain that 80% of newborns will have some degree of jaundice, particularly premature infants. Generally speaking, symptoms include a yellowing of a baby’s skin and the whites of their eyes, often starting at their face and moving down their body. Some infants may also experience poor feeding and lethargy. But in rare cases, hyperbilirubinemia can lead to kernicterus, a type of brain damage that can result from high levels of bilirubin in a baby’s blood, which can cause athetoid cerebral palsy, hearing and vision loss, and intellectual disabilities.

Led by Dr. Alex Kemper of Nationwide Children’s Hospital in Columbus, Ohio, the updated guidelines apply to newborns born after 35 weeks of gestational age, which accounts for the vast majority of newborns and even premature newborns in the U.S. As with previous guidelines, updated recommendations address issues of prevention, risk assessment, monitoring, and treatment of hyperbilirubinemia.

Kemper and his team of neonatologists, hospitalists, primary care pediatricians, nurses, and breastfeeding experts, recommend that all newborns be tested with a device that measures bilirubin levels through the skin or by a blood test. While this has been standard practice at many hospitals, the AAP has made this an officially prescribed, universal recommendation.

“Measuring bilirubin levels on all babies is a critical step in knowing which babies need phototherapy, or light treatment, to bring down the bilirubin level, or how soon a baby needs follow-up after discharge,” Kemper said in a AAP press release.

Transcutaneous bilirubinometry (aka testing through the skin) works by directing light into the skin and measuring the intensity of the wavelength of light that is returned. The measurement is usually taken by pressing the meter against the sternum or forehead of the baby for instant results. A blood test is done via a “heel stick collection” where a doctor or nurse will poke the infant’s heel with a small lancet and collect blood in a vial. (Don’t worry, parents: this can be done with other blood screening tests, so your baby won’t have to be poked too much.) The guidelines also recommend ongoing visual assessment — at least every 12 hours — following delivery or until discharge.

Thresholds for phototherapy and exchange transfusion in the treatment of jaundice have been raised.

Perhaps the most notable revision in the AAP’s guidance pertains to the phototherapy (aka putting a baby under blue LED lights to decrease bilirubin concentrations) and exchange (blood) transfusion. New guidelines have increased the threshold for treatment for hyperbilirubinemia as the latest research suggests bilirubin does not cause toxicity unless it reaches levels higher than previously thought. In other words, fewer babies will have to hang out under lights or require a blood transfusion. In addition to altering the threshold for these treatments, the AAP also offers guidance on when bilirubin should be measured again, enabling clinicians to better assess what sort of follow-up is required.

Of course, as they say, an ounce of prevention is worth a pound of cure, and so assessing and more closely monitoring infants who may be at higher risk — such as babies of lower gestational age; babies with a family history of jaundice; genetic ancestry; G6PD deficiency; and Down syndrome; among other factors.

“It’s important for hospitals and clinicians caring for newborns to have plans in place to prevent the serious complications of hyperbilirubinemia,” Kemper said in the AAP statement. “The guideline provides clinicians, birthing centers and hospitals with strategies to prevent the worst-case scenarios and to help educate families so they recognize the signs of jaundice and know when to follow-up with their pediatrician.”

More Like This
Cold Medicines For Kids: Safety, Risks & Best Alternatives
How To Get Boogers Out Of A Baby's Nose
Are You Leaking Amniotic Fluid Or Is It Normal Discharge? Experts Explain
Alec & Hilaria Baldwin Welcome Baby #7, And Revealed Her Cheerful Name