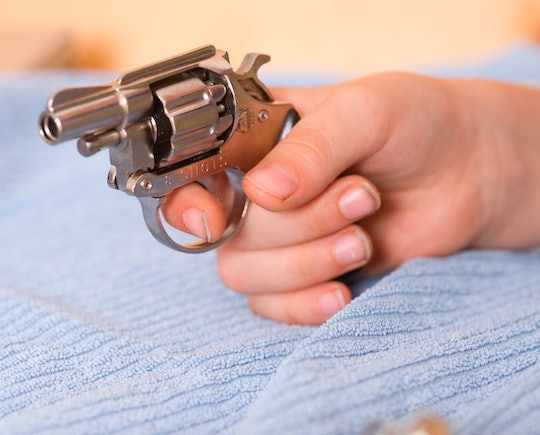 Accidental Shooting Deaths By Children Jumped 31% During The Pandemic

Everytown for Gun Safety has linked school closures and a pandemic-related surge in gun sales to the rise of accidental gunshot deaths stemming from children handling unsecured firearms.

Gun safety advocates are sounding the alarm about a disturbing rise in accidental shootings by children, which they believe to be linked to both a surge in gun sales and pandemic-related school and child care closures. Recently released data from Everytown for Gun Safety shows the number of accidental shooting deaths caused by children rose 31% in the first 10 months of the pandemic compared to the previous 10 months.

“Every year, hundreds of children in the United States gain access to unsecured, loaded guns in closets and nightstand drawers, in backpacks and purses, or just left out,” Everytown for Gun Safety noted in a report released Monday. “With tragic regularity, children find these unsecured guns and unintentionally shoot themself or someone else.”

But, according to Everytown, soaring gun sales early in the pandemic combined with the closures of schools and child care centers around the country led to more and more children spending more and more time at home with unsecured firearms. In fact, Everytown has said researchers recently estimated the number of children living in U.S. households with at least one loaded and unlocked gun had increased from 4.6 million in 2015 to 5.4 million in 2021. And as a result, the number of accidental shooting deaths by children has also jumped.

Data from Everytown has shown that from March to December 2019 there were 98 unintentional shooting deaths by children. During those same 10 months in 2020, the gun safety advocacy group counted 128 deaths.

Everytown for Gun Safety has been tracking accidental shootings by children since 2015 after realizing there was no centralized database tracking such tragedies. Between Jan. 1, 2015, and Dec. 31, 2020, Everytown’s #NotAnAccident Index has recorded at least 2,070 unintentional shootings by children younger than 18. A total of 765 of these shootings have resulted in deaths while 1,366 have resulted in injuries.

And although data is not yet available for 2021, recent headlines make it clear accidental shooting deaths by children have happened. In August, The Washington Post reported a 21-year-old Florida mom was shot and killed by her toddler while on a Zoom call after the toddler had found a loaded and unsecured handgun in the home. Also in August, the Milwaukee Journal Sentinel reported a 2-year-old in Wisconsin had been shot and killed by his 4-year-old brother after the pair were left unsupervised in a bedroom with a gun.

According to Everytown, teenagers between the ages of 14 and 17 are the age group most likely to be both shooters and victims in accidental shootings by children. The second most likely age group are preschool-aged children 5 and younger. And while children do sometimes accidentally shoot adults, it’s more likely that they shoot other children. According to Everytown, 91% of people injured or killed in accidental shootings by children are also children.

What’s more, accidental shootings by children often have a long-term impact that extends well beyond any immediate injuries or death. “When a child gets their hands on a gun and unintentionally injures or kills themself or others, the physical and psychological trauma is long-lasting, affecting the victims and their families, the child who accessed the gun and their family, and the extended communities of both,” Everytown noted in its recent report. “And yet this type of entirely preventable tragedy occurs roughly once per day in the United States.”