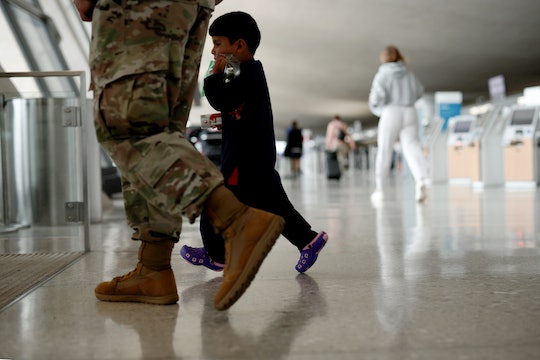 More Than 100 Afghan Kids Have Arrived In The U.S. Without Parents

And federal officials say that number will only continue to rise.

The number of unaccompanied Afghan children currently in U.S. custody has more than doubled since late August. More than 100 Afghan children have arrived in the United States without a parent, the Department of Health and Human Services (HHS) said Wednesday. In August, the number of unaccompanied Afghan minors reported to be in U.S. custody was 34. Federal officials have said they expected that number to continue to grow as more unaccompanied children and teens are identified among those recently evacuated from Kabul.

Without providing specific numbers, HHS said Wednesday that a “majority” of unaccompanied Afghan children had been reunited with a non-parent relative who had also recently been relocated to the United States, CBS News reported. Children who do not currently have family in the country are expected to remain under the care of HHS’ Office of Refugee Resettlement (ORR) until a suitable sponsor is found or they turn 18.

“We are working to ensure that Unaccompanied Afghan Minors (UAM) who are referred to the Office of Refugee and Resettlement (ORR) for processing, unification, or placement are placed with licensed care providers that are able to provide culturally and linguistically appropriate services or unified directly with a vetted sponsor, such as a family member who arrived with the minor," HHS said in a statement to CBS News.

In some instances, officials have managed to locate parents and reunite families fairly easily. Take the situation of a 17-year-old boy who, when asked by his parents to guard the family's luggage, followed the suitcases onto a plane bound for Ramstein Air Base in Germany. According to ABC News, the boy’s family was later located and flown to Ramstein where U.S. officials reunited the teen with his parents.

But the more than 100 Afghan children currently separated from their parents in the United States are, unfortunately, only a small segment of children who were separated from their parents while attempting to flee Afghanistan following the Taliban’s takeover. The United Nations Children’s Fund (UNICEF) said Tuesday it had registered an additional roughly 300 unaccompanied or separated Afghan children in Germany, Qatar, and other countries.

In a statement released Tuesday, UNICEF Executive Director Henrietta Fore urged countries involved in resettlement to avoid placing unaccompanied Afghan children in institutional care arrangements unless as a last resort. Instead, she urged placing children with relatives or extended family members and enabling children traveling with trusted, known non-family members to remain with those adults.

“UNICEF is deeply concerned about the welfare of unaccompanied and separated children wherever they may be,” Fore said. “They are among the most vulnerable children in the world. It is vital that they are quickly identified and kept safe during family tracing and reunification processes. All parties must prioritize the best interests of the child and protect children from abuse, neglect, and violence.”