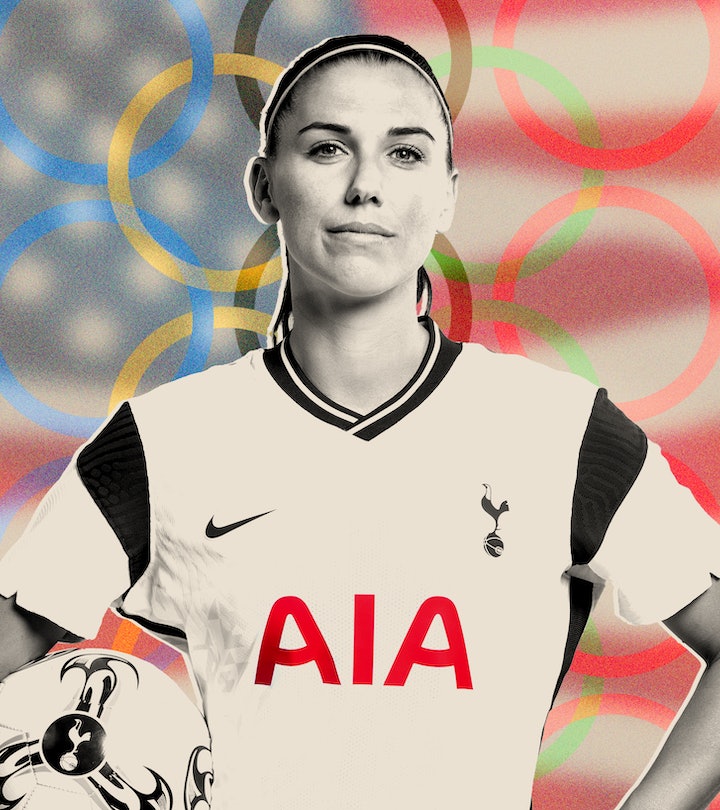 “Priorities change” after becoming a mom. But the winning doesn’t stop.

Olympic gold medalist Alex Morgan is making headlines every day for her moves on the soccer field as the Tokyo Olympics approaches, but the 31-year-old wasn’t sure she’d ever play for her country again after having a baby. “Before I got pregnant, my mindset was like, it’s possible that I’ll never reach my potential again,” Morgan tells Romper.

Now mom to the adorable 1-year-old Charlie Elena (who was born on May 7 of last year), Morgan’s perspective has shifted. “I think that was the wrong way to approach getting pregnant and starting a family,” she says, “because women can absolutely give birth, have a family, have children, and play their sport at their highest potential — as well as they did before giving birth and even better.”

Morgan will be playing in her third Olympics when the U.S. Women’s National Soccer Team faces off against Sweden in Tokyo on July 21st (ahead of the opening ceremonies on July 23rd). In addition to winning World Cups and Olympic medals, Morgan has fought alongside her teammates for equal pay for women athletes. On International Women’s Day, 2019, Morgan led the USWNT in a lawsuit alleging the team has been subjected to years of unequal compensation in spite of winning Olympic gold and several World Cups.

Morgan recently took a quick break in the middle of an afternoon training with her team, Orlando Pride, to chat with us about life as an Olympian and how she’s raising her daughter.

Romper: What is a typical day like for you?

Alex Morgan: So, a typical day is... about 7:00 waking up and trying to brush my teeth and wash my face before Charlie is ready to be taken out of her crib. I'll usually get her out of the crib about 7:10, then give her a bottle, and make myself coffee, and then make her breakfast. Around like 8:30 is when I leave for training, so Charlie's nanny will come about 8:15. I'm gone until about 1:30 or 2:00 at training, and when I come home, she's getting up from her nap around then.

I will usually get her up; we'll go to the park [or] go on a bike ride, spend some time outside in the backyard maybe. It's all about being Mom and doing whatever she really wants to do; getting her active and doing stuff. And then 5:30 is dinner time, which is too early for me and my husband to eat — usually I'll just make her dinner — and then I give her a bath, and give her a bottle, read her a couple of books and she's down by 7:15 pm. And then I will be able to eat dinner and hang out for an hour or two and then I'm pretty much in bed by 9:30 p.m.

That sounds amazing. It's so great that you get to spend so much time with your daughter.

AM: Yeah. Absolutely. Some days obviously are longer than others. And maybe I'll have a photo shoot, or a couple of interviews, or a Zoom call or something, but for the most part, I'm able to be home by 2:00, hanging out with her.

What's your favorite thing to do with Charlie?

AM: I love taking her on bike rides — she absolutely loves going in the bike seat. And she loves going to the local park and chasing after squirrels. She’s fearless and loves to explore, so she will go up to any kid or any person around the park. She also really loves water, so I love to take her swimming.

She hasn't done swimming lessons yet, but we're very eager to get her into swimming lessons soon. She loves to kick and wants to keep moving in the water. We’ve been in the pool ever since she was pretty much 2 weeks old!

When did you first fall in love with sports?

AM: I mean, I loved sports from a really young age. I told my parents that I wanted to become a professional soccer player when I was like 7 years old. But I think when I realized that I had the potential to be a professional soccer player, or compete for my country in a world tournament, was probably when was... I would say like 17 years old. I had a scholarship to go to college. I was on a national team, and I knew that was what I was going to do. I wanted it more than anyone else. And I was willing to work harder than anyone else to achieve that.

Has being a mom has changed you as an athlete?

AM: I used to have certain rituals I would do before a game: I would eat a specific meal; I would do the same thing before a game on game day. Now as a mom, you can't do that. You're Mom until you leave for the game. And then once you leave the game, you're still Mom on the bus ride or in the locker room. So [now] it's more about... just when I get those moments to myself to be able to focus on the day, to spend that time to just meditate or take deep breaths...

But also... being a professional athlete is totally different now than two years ago, before being a mom athlete. Priorities change and you have to get up and go to training and do your job, and make the most of it, and know that when you come home there's no time to let your body stretch and just lay on the couch. You’re Mom from the moment that you get home. So it's all about juggling that, and I feel like I'm learning every single day how to be the best mom and the best soccer player that I can be.

Would you be a different kind of parent if you were not an athlete?

AM: I definitely think that I would be a different person without sports; they taught me so much. Just about myself, patience, teamwork, listening... it's taught me so much that I feel like I've applied to being a mom.

What advice would you have for Charlie if she wanted to follow in your footsteps?

AM: I don't want to force her into playing on a club team too young, or to make hard decisions on playing one sport rather than two or three. I think a lot of kids have to pick one sport at a young age, and I learned so much from being a multi-sport athlete and not being forced into one direction.

If there's anything I could help her with, it would be to enjoy playing different sports, and to not ever feel like it's too much or overwhelming, because the reason that I still play soccer is because I love it. The moment that this is considered more of a job to me than what I love to do is when I'll walk away from the game.

What's something else you're good at that has nothing to do with motherhood or sports?

AM: I would say I'm good at organizing things, like trips or vacations. I'm always the one to book the flights, and do things like that. I like to do my research. I wouldn't say I'm a super type A personality, but I like to be organized when it comes to travel and vacation.

Is something you feel that people don't understand about being an athlete and a mom?

AM: I feel like for me, I'm tapping into a whole new level that I didn't have before getting pregnant. I was really scared going into pregnancy thinking that I might not get back to playing for my country ever again, or playing as well as I was before. And I think that's something that some female athletes do have a fear of, and so for me, I want to be as open as possible in my journey, in showing women that we are capable of incredible things and that we can be professional athletes and moms. Our bodies are capable of going through incredible things.

Who is an athlete that inspires you?

AM: I have three teammates on Orlando that have kids, Ali [Krieger], Ashlyn [Harris], and Sydney [Leroux], and having kind of a mom club within our team is really amazing. And we all have different journeys. We all had our kids around similar times, but just being able to have this mom support group is really inspiring. Knowing that what we're going through is all very, very difficult and challenging, but [we’re] able to rock it and just continue to be the best moms and athletes is really inspiring. I have a lot of fun with the four of us just sharing stories and sharing experiences.

What's something that you always have in your gym bag, or your purse, or your diaper bag, whatever you carry with you?

AM: Also, definitely Go-Go Squeez, because she is hungry 24/7. And so, those two are for sure always in my gym bag-slash-diaper bag, which is basically the same thing.

When you're a mom, every bag is your diaper bag pretty much.

This interview has been condensed and lightly edited for clarity.