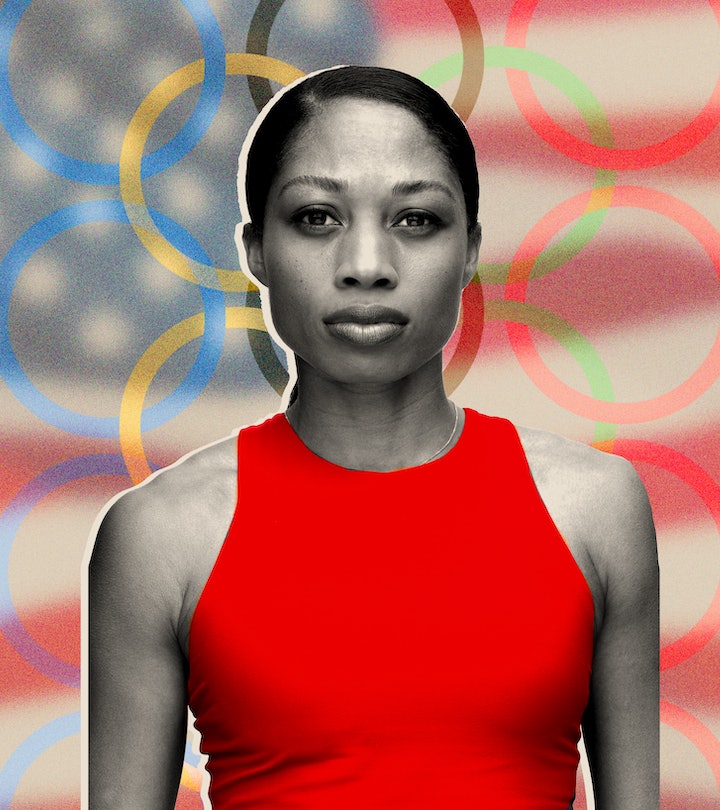 Allyson Felix Thought Motherhood Would End Her Career. But She Kept Winning.

“There's no reason that you can't have your best performances after becoming a mother, or do your best work.”

Ten months after a severe case of preeclampsia lead to an emergency C-section while just 32 weeks pregnant, Olympian Allyson Felix sprinted past a record held by Usain Bolt, the fastest man in the world. It was a postpartum victory in a time when professional sports like track and field were only just beginning to question the stigma that has long surrounded elite athletes having babies. Now, with a fifth Olympic Games in her sights, Felix is proof that becoming a mom is far from being a career-ending move.

“I think it’s really looked at as you can only do one,” Felix, who’s currently training for the Tokyo Games as a Team Bridgestone Athlete Ambassador, tells Romper of having a baby and being an Olympian. “I know even for myself, when I thought about becoming a mom I always kind of imagined it happening when I was done with my career.”

It’s not surprising to hear Felix admit she’d assumed motherhood would happen once she was done collecting medals. For decades, pregnancy and motherhood have been considered dubious life choices for professional athletes like Felix, who earned her first Olympic silver at the age of 18 while competing at the 2004 Summer Games in Athens. Just last year, fellow runner Phoebe Wright likened getting pregnant to “the kiss of death” for female athletes in a New York Times op-ed. In 2019, Olympic middle-distance runner Alysia Montano told the Times Nike had reacted to news of her pregnancy five years earlier by saying they would stop her sponsorship contract and payments. Additionally, she told the outlet, the U.S. Olympic committee threatened to end her health insurance should she fail to maintain a top ranking in her sport while pregnant.

And yet, when Felix did become pregnant in 2018, she found she wasn’t at all ready to hang up her sneakers. Despite a harrowing birth experience and a longer-than-expected recovery (it was three months before she could even get back on to the track to train), Felix has made a powerful return, effectively stepping right back into the role of champion both on and off the track with newfound motivation.

I don’t want her to have the same battle.

Before her daughter Camryn even turned 1, Felix nabbed her 12th gold medal at the 2019 World Championships, surpassing Bolt’s record for the most gold medals in track and field World Championship history, and became an advocate for female athletes and Black women. In May 2019, she publicly condemned Nike’s treatment of pregnant athletes, spurring the brand to ultimately end its practice of financially penalizing pregnant athletes and expand its maternity protections. That same month, Felix shared her childbirth story with members of Congress, urging lawmakers to address the racial disparities that have left Black women at least three times more likely to die during pregnancy than white women. She’s since teamed up with the U.S. Centers for Disease Control and Prevention (CDC) to help combat this country’s devastatingly high Black maternal mortality rate.

In many ways, it’s been Camryn that’s spurred Felix’s advocacy work. “Becoming a mom — it shifted my focus to thinking about this world that my daughter will grow up in,” Felix says. “I don’t want her to have the same battle. [Motherhood] gave me that final bit of push that I needed and helped me find my voice so that I could speak on these very important issues.”

Allyson Felix’s 2-year-old daughter Camryn often joins her mom at training sessions, giving the Olympic sprinter a new motivation for sprinting across the finish line. “I can’t wait to be able to show her those photos or those videos of her at training,” Felix tells Romper. “I don’t care what she chooses to do, but I hope that I’m able to teach her that you pursue that with everything that you have and you do it in the right way.”

That’s not to say Felix’s return to the track was easy. “It was definitely a pretty rough road back and it didn't go how I had imagined,” Felix says. “It was a very humbling experience because things that I once did that I didn’t even give a second thought to were now really challenging.”

There's no reason that you can't have your best performances after becoming a mother, or do your best work.

As difficult as those early postpartum training sessions may have been, Felix remained committed and has shown that motherhood doesn’t have to be synonymous with retirement.

“Whether it’s as a professional athlete or in the corporate world or whatever, I think it's really sometimes seen that you're going into this next chapter of life [when you have a baby] and I just, I think that's a misconception,” the 35-year-old sprinter says. “There's no reason that you can't have your best performances after becoming a mother, or do your best work.”

Unsurprisingly, having a child to care for means how Felix trains has changed. “I know I used to get much more rest,” Felix jokes. “Now, I’ve had to get a lot smarter with my training just because I don’t have a lot of extra time.”

As a result, she’s learned to accept that things may not always go as planned and to lean on others for help when it’s needed. “Some days I feel like I’m absolutely thriving on the track and everything is clicking and then I come home and it’s a really challenging day — maybe my daughter isn’t sleeping well or something is off,” Felix says. “I think just being okay with not being okay, being comfortable with asking for help, and really just leaning into others has allowed me to be able to still train at a high level.”

That’s not the only piece of parenting advice Felix has found serves her well both as a mother and an athlete, especially given the unpredictable nature of this past year and the pandemic’s postponement of the 2020 Olympics. “A lot of my girlfriends have really told me to have an open mind as a parent and to be ready to go with the flow, not to have everything so structured,” she says. “When I think about my athletic career, you can apply the same thing.”

Felix, who says she’s “really proud to be a team Bridgestone athlete” this summer, will soon have the chance to give her best performance yet. With six Olympic gold medals already under her belt — the most of any female track and field athlete in history — Felix is hoping to add to that record when the Olympic Games kick off in Tokyo in July. And she clearly has all the motivation she needs. As she says, “[Motherhood] is something that takes you to the next level and gives you even more reason to go after whatever that goal is.”

More Like This
How Do I Rediscover My Sexuality When I’m Completely Touched Out?
Chris “Ludacris” Bridges On Creating The World He Wants For His Daughters
I Found Gender Euphoria In My Second Pregnancy
OB-GYNs On How The End Of Roe Changes How They Can Care For Us