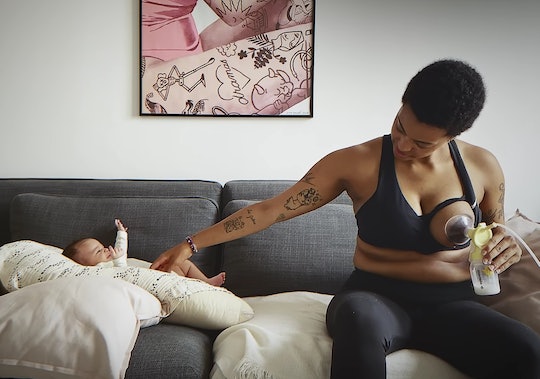 The Olympian fought to secure maternity protections for Nike athletes years before the brand centered pregnant and breastfeeding athletes in a powerful new ad.

Nike is celebrating pregnant and breastfeeding athletes in an empowering ad for its new maternity line. One of its athletes, however, has pointed out that it fails to address how the brand has treated pregnant athletes in the past. While Olympian Allyson Felix called Nike’s maternity ad “powerful,” she also said in a thread on Twitter that it was “hard to watch” as it did not acknowledge the struggle of pregnant athletes like her who’d fought to improve the athletic industry’s perception of athletes who are also moms.

“I think you should watch this ad,” the track and field champion tweeted Sunday not long after Nike dropped its “The Toughest Athletes” ad to promote its new maternity line, Nike (M). “It reminds mothers that they are athletes. It celebrates mothers. It speaks truth. It’s powerful.”

“Can you be an athlete? You, pregnant. You, a mother,” the narrator in Nike’s ad asks before detailing how pregnant and postpartum people, among other things, deal with pain, push past their limits, move their body, and get things done no matter the obstacles. “If you aren’t, no one is,” the narrator concludes.

“It’s brilliant marketing,” Felix tweeted about Nike’s ad. “I agree with every word in this ad.”

While Felix applauded the message of empowerment, she said she also found the ad “hard to watch.”

“My experience, along with many others, forced NIKE to support athlete's maternity, and when I watch this ad, it doesn’t seem to acknowledge that war,” the Olympic medalist and 11-time world champion tweeted. “This ad is beautiful and heartbreaking. It celebrates all of the right things but seems to ignore the struggle it took to get to this point.”

It’s a struggle Felix is more than familiar with. In 2019, Felix revealed her contract renewal negotiations with Nike had come to a standstill following the birth of her daughter in late 2018. According to Felix, Nike had refused to guarantee maternity protections and offered her just 70% of what she’d been paid prior to her pregnancy and childbirth. “If I, one of Nike’s most widely marketed athletes, couldn’t secure these protections, who could?” Felix asked in an op-ed for the New York Times.

Felix wasn’t the only athlete to speak out. A 2019 investigation by The Times featured personal accounts from a number of professional athletes, including Phoebe Wright, who equated getting pregnant to “the kiss of death” for a female athlete in regards to sponsorships.

Olympian Kara Goucher told The Times Nike had refused to pay her until she returned to competition, essentially forcing her to choose between both caring for her newborn who fell ill shortly after birth and giving her body the time it needed to heal and her paycheck. Meanwhile, Olympic runner Alysia Montaño told The Times she not only had to fight Nike to keep her sponsorship paycheck, but also grappled with The United States Olympic Committee and U.S.A. Track & Field pulling her health insurance during her pregnancy as she was not able to compete.

Their fight and vocal criticism eventually led Nike to include maternal protections in their sponsorship contracts. These included a guarantee that athletes would not face performance-related financial penalties for 18 months beginning eight months prior to their due date, Sports Illustrated reported.

Many moms who caught Nike’s ad have been quick to call out the athletic brand. “Good morning 2 everyone but @Nike,” journalist and mom of three Katherine Goldstein tweeted Monday. “I saw your slick ad championing powerful moms, but I have not forgotten how you treated your mom athletes — reducing/cutting off pay while pregnant & forcing them to risk their health, creating harsh contracts & skirting discrimination laws.”

Still, Felix is hoping fans and aspiring athletes alike will watch Nike’s ad if only for one very important reason: accountability. “I also think you should watch this ad so that you will hold Nike accountable for it,” she tweeted.