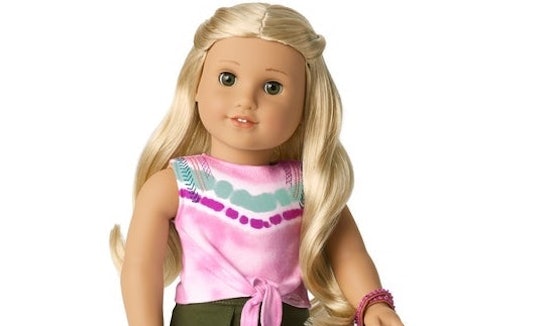 One Million Moms claims lesbian characters are part of a "social agenda to push homosexuality," but American Girl isn't bothered and remains committed to inclusivity.

In December of 2020, American Girl named Kira Bailey as its "2021 Girl of the Year." But the new American Girl doll, a budding wildlife conservationist and climate change activist, has prompted the ire of conservative group One Million Moms. The organization, which has been designated as an anti-LGBTQ hate group by the Southern Poverty Law Center is "outraged!" over the fact that lesbian characters appear in the doll's accompanying book Kira Down Under. Yes, really.

In the American Girl story, aimed at third to fourth grade readers, Kira travels from Michigan to spend the summer at the wildlife rehabilitation center run by her Aunt Mamie and Mamie's wife, Lynette. An image of the characters getting married appears in the book.

The fictional lesbians have prompted the organization to create a petition for the company to discontinue the storyline. The letter to American Girl, which is owned by Mattel, has gotten approximately 32,500 signatures as of press time. "Why can’t the toy manufacturer let kids be kids instead of glamorizing a sinful lifestyle?" OMM bemoans in the petition. "American Girl is confusing our innocent children by attempting to normalize same-sex marriage."

"I'm not buying into your social agenda to push homosexuality," the letter to American Girl goes on to read. "Your '2021 Girl of the Year' Kira Bailey storyline offends me and many other Christians and conservative families. ... I won't be buying your products either until I know that your company is remaining neutral in the culture war."

A division of the American Family Association, a Christian organization that opposes LGBTQ rights and reproductive rights, OMM has a nearly decade-long history of grabbing headlines in its mission to "stop the exploitation of our children, especially by the entertainment media." From objections to Ellen DeGeneres serving as J.C. Penney's spokesperson in 2012 to objecting to seeing a man wearing makeup in a commercial for Ritz crackers in December 2020. Objections to Kira's lesbian aunts is not even the first time OMM has come after American Girl. In 2015, the organization objected to a girl and her two fathers being featured in American Girl magazine.

OMM's petition letters routinely harken to the idea of LGBTG+ representation as contributing to a "culture war" and imply the power of their influence. However some, including Jeremy Hooper writing for GLAAD, have questioned just how many moms comprise the organization, because evidence of a million or, indeed, even more than one, is scant at best. The group's Twitter account has fewer than 5,000 followers. Moreover, according to a 2020 Gallup poll, a strong majority of Americans, 67%, including nearly half of Republicans, believe same-sex marriage should be legally recognized.

Meanwhile, reviews of Kira Down Under on Amazon are largely positive — most customers rating the story five stars. On Twitter, reaction to the petition is minimal and overwhelmingly dismissive of OMM's protest. "Sorry to break it to One Million Moms," @peterdelevett tweeted. "There are lots of LGBTQ people in America, and they shop too."

American Girl, it seems, is similarly unmoved by the group's petition. In a statement to Yahoo! Life, American Girl spokesperson Julie Parks said "American Girl was built on a foundation of diversity and inclusion, and we remain committed to empowering the next generation of girls who will emerge as leaders who value empathy, equality and respect. We’re proud of our reputation for having a wide range of inclusive and diverse dolls, accessories and content and we’re excited about our upcoming plans that will allow for even more girls to see themselves reflected in our products."