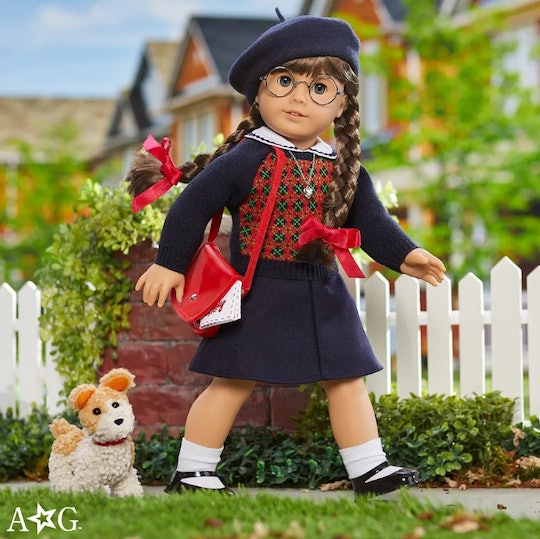 “To all the Molly girls in the world. We see you. And we celebrate you.”

Congratulations, fellow Millennials: we have a new opportunity to be kids again. American Girl has announced the relaunch of the Molly McIntire doll. But it’s the timing — on the first day of Pride Month — and the wording of the announcement — the company “sees” and “celebrates” the “Molly girls” — that has some fans even more giddy than ever. An official hint, some say, that our theories about the iconic doll have been right all along...

Molly was one of the three original American Girl dolls (along with Samantha and Kirsten) released by the Pleasant Company in 1986. Each doll featured a line of books, clothing, and accessories that highlighted a period of American history. Molly’s story set primarily in 1944 and taught young fans about life on the home front during World War II. After the company was bought by Mattel in 1998, the original “Girls” were retired — Samantha in 2008, Kirsten in 2009, and Molly in 2010. But starting June 1, Molly is available on American Girl’s website and at all American Girl retail locations nationwide. The doll (complete with classic glasses/sweater/skirt look) also comes with the paperback book Molly: A Winning Spirit, by bestselling American Girl author Valerie Tripp. Other original outfits and accessories will also be available.

In a tweet from American Girl, the company confirmed that the doll was returning to the Historical collection and will be “around for quite a while.” But about that announcement...

“Molly” is coming out of retirement.

“To all the Molly girls in the world,” it begins on Instagram. “We see you. And we celebrate you. A classic is back!”

Many fans couldn’t help but speculate about the wording of the official announcement of the relaunch. We can’t tell for certain when it became official, but Molly holds a special status among many fans, especially LGBTQ+ fans, as a queer icon. In 2018, comedian Cameron Esposito tweeted “Molly the American Girl doll is a lesbian and that is queer canon.” Some folks have joked that having a Molly doll “made” them a lesbian while some just simply stated that Molly being a lesbian was just a feeling they always had.

As Katie Heaney of The Cut wrote: “Molly Jean McIntire (an extremely gay name) was born on April 22, 1934 (a Taurus), though she remains 10 years old. She’s bad at math (hmmm), hates her straight hair (hmmm), and has a fixation on her teacher Miss Campbell (HMMM).”

On Twitter, American Girl fans reacted to the news and shared their own delight at the (assumed but not confirmed) affirmation of Molly’s homosexuality.

Twitter user @getagatsby suggesting that Molly’s re-release on the first day of Pride is no coincidence.

Twitter user @getagatsby referred to Molly’s re-release as an acknowledgement of the character’s “queer icon status.”

“I am thriving, I am vindicated, I f-ckin knew it,” celebrates @RosieeThor.

Twitter user @Birdiaaa jokes about the re-release of Molly.

Twitter user @Birdiaaa jokes that bringing back Molly is an act of “queer solidarity.”

But is Molly canonically queer? American Girl did not respond to Romper’s request for comment in time for publication, but in a statement to The Cut, the company brushed off the idea that the announcement was an assertion of anything other than the re-launch. “The new Molly collection releasing today is simply aligned with when all of our new summer product is debuting,” the statement said. “Nothing more.”

But regardless as to whether the company ever makes an official declaration, fans can pore over the books for clues, as well as a slew of new Molly-themed events and activities including the new podcast American Girl 10-Minute Mysteries (the first is based on the popular story The Light in the Cellar: A Molly Mystery); personalized, Cameo-style messages from Molly starting June 8; new content from American Girl’s TikTok channel and Instagram; and more.

The new Molly product collection is available June 1, 2022, at americangirl.com and at all American Girl retail locations nationwide.

More Like This
This Reddit Post About Two Sisters In A Fight Over Breast Milk Is Complicated & So Sad
Reddit Is Not Impressed With Dad Who Hid Neighbor's Gnome Because It Scared His Kid
'Caillou' Is Officially Getting A CGI Reboot Whether People Like It Or Not
What Exactly Are Minions, Anyway ?