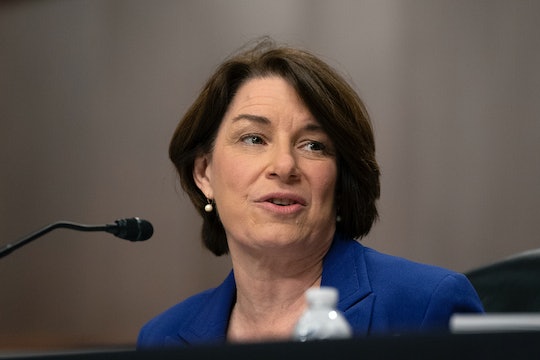 “It’s easy to put off health screenings, just like I did.”

In a statement published on Medium, Minnesota Sen. Amy Klobuchar announced that she received a breast cancer diagnosis earlier this year. But while the former Democratic presidential candidate used the announcement to share news of her personal health, she took the opportunity to urge Americans not to delay routine health screenings.

“Many people have been delaying physicals and routine examinations because of the pandemic,” she wrote in the Medium post published Thursday. “I know that because I delayed mine.”

Klobuchar shared that she was diagnosed with Stage1A breast cancer in February of this year after doctors observed calcification of breast tissue during a routine mammogram. Following a lumpectomy, she wrote, she underwent radiation therapy, which ended in May. Follow-up appointments determined that the cancer was gone and that her chances of getting cancer again are “no greater than the average person.”

But her concern shifted from her personal health challenges to those of the American people. “Many people have been delaying physicals and routine examinations because of the pandemic. I know that because I delayed mine,” she wrote. The senator is not alone. According to a study from Epic Health Research Network, from April to June of 2020, screenings for colorectal cancers dropped 86%. Breast and cervical cancer screenings went down a staggering 94%.

While numbers have buoyed over the course of the pandemic, they nevertheless remained below pre-pandemic levels. In June 2021, the Centers for Disease Control and Prevention (CDC) announced that breast and cervical cancer screenings were still down 87% and 84% respectively. There are many reasons one might miss an appointment — fear of contracting the illness; not having the ability to make an appointment while working from home and caring for remotely-schooled children; losing health care as a result of losing a job. But the consequences of a missed appointment could literally be the difference between life and death. In fact, the National Cancer Institute predicts an excess 10,000 deaths in the next decade due to colorectal and breast cancers alone.

Early detection of cancers is crucial to survival rates, with earlier stage cancers generally being far easy to treat than late stage. Breast cancer, for example, when detected early, has a 98% 5-year survival rate, which also remains high at 10 years.

“There is rarely a good time to go in for a mammogram or routine health screening,” Klobuchar wrote. “But I hope my experience is a reminder for everyone of the value of routine health checkups, exams, and follow-through. I am so fortunate to have caught the cancer at an early enough stage and to not need chemotherapy or other extensive treatments, which unfortunately is not the case for so many others.”