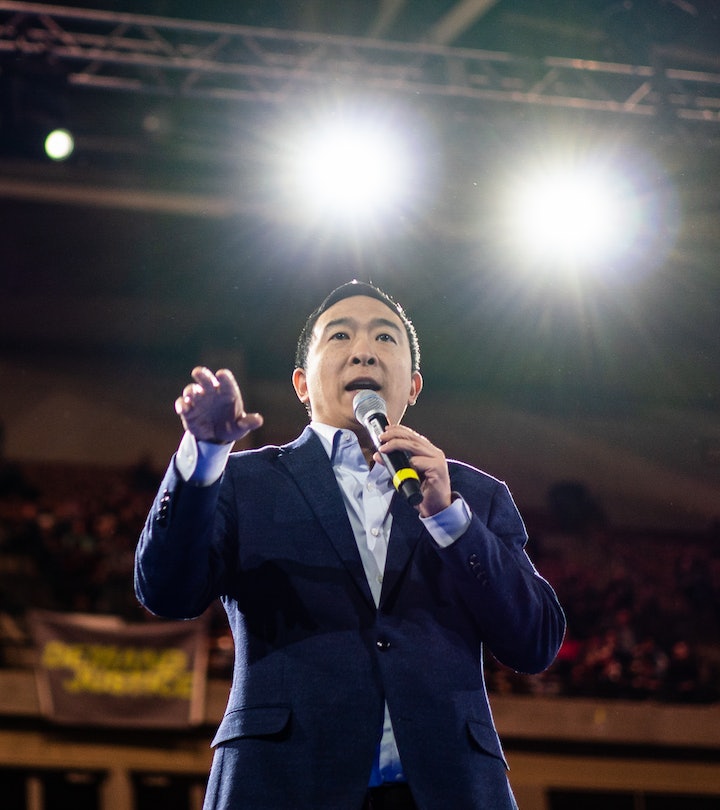 Andrew Yang's 2020 presidential bid may not have gotten him to the White House, but it successfully launched his career as a candidate with the ability to energize a base ("Yang Gang" has a great ring to it) and outlast more conventional, politically experienced candidates. The 45-year-old entrepreneur now has his sights set on the Mayor's Office in New York City. But recently, Yang's comments about working from home with children in a recent profile in The New York Times seem to have struck a particular chord with readers... and potential voters.

Yang, who's lived in New York City for more than two decades, has been criticized for spending much of the pandemic outside of New York City — both in his family's second home in New Paltz, NY and in Georgia — leading many to question his commitment to understanding the plight of everyday New Yorkers during this devastating pandemic. In explaining his extended absences from his Hell's Kitchen apartment, he told The New York Times: “We live in a two-bedroom apartment in Manhattan. And so, like, can you imagine trying to have two kids on virtual school in a two-bedroom apartment, and then trying to do work yourself?”

To which the internet, particularly the urban-dwelling-parents part of the internet, erupted in a collective scoff. Because not only can people imagine it, they're living it and have been for almost a year.

Look, I doubt many people in Yang's position would have done much differently — wealthy New Yorkers leaving the city for suburban and country homes, many permanently, has been an incredibly common story since the pandemic hit. Many people, wealthy or not, understand that impulse. And certainly no parent or guardian educating a child in a New York City apartment (average size, according to reporting from Curbed, 866 square feet and shrinking) or anywhere is saying this is easy. But suggesting it is impossible or, worse, hypothetical, clearly rankled families going through the coronavirus pandemic in close quarters.

Parents and New Yorkers alike took to Twitter to voice their irritation.

"If you don't know that countless parents in NYC are dealing with this exact or worst [sic] circumstance," wrote Twitter user @mayacontreras, "you shouldn't be running for mayor of our city."

"So Andrew Yang basically said that what my life, two kids and I have done since March is impossible," quipped Twitter user @LaMonicaBuzz.

"Dude, read the room," tweeted @RPHWrites. "I think most parents in NYC know how this feels."

"YES," @jboyolee emphatically declared in a tweet. "Literally every NYC parent can imagine this..."

"I am a parent of 2 who does this all the time," @Chefboiyardie tweeted, before continuing. "MOST NYers do this! From most minority NYers SMD."

Even some of his political rivals responded including mayoral candidates Dianne Morales and Scott Stringer:

"I spent all of 2020 in NYC, living with THREE generations under one roof, AND running a campaign from home," Morales tweeted as she promoted her campaign for mayor.

In another article in the New York Times, Yang clarified his statements and defended his family's decision to leave New York during the pandemic: "Every New York parent has struggled with educating our children in a time of COVID. I've been proud to live, work, and raise my kids in the city for 25 years. After COVID shut down our public schools, we took our two kids, including my autistic son, to upstate New York to help him adapt to our new normal. Evelyn and I know how lucky we are to have that option, which is why I've committed the past several years of my life to lifting up working families and illuminating poverty. We have a lot of work to do to safely reopen our schools and get New York back on its feet."

There are those who have defended Yang's choice to head to his second home, claiming the original standalone quote was "unfair" or that that he misspoke or was taken "out of context." But for some, the damage has apparently been done.