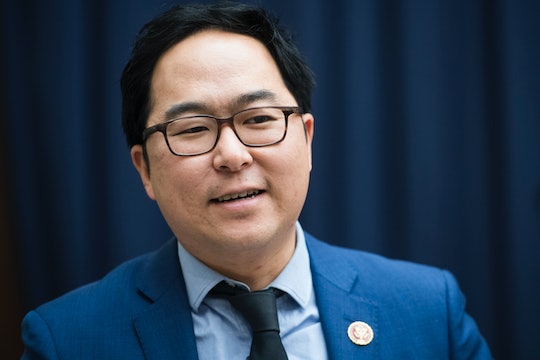 Rep. Andy Kim Says He Cleaned After Capitol Riot Because It's What His Mom Taught Him

"She took me to the Capitol and taught me to love and care for this nation that gave us everything."

While most of the images coming from the Jan. 6 attack on the Capitol building showed scenes of disturbing terror and violence, there were some, taken after the rioters had been cleared out, that depicted a very different emotion: care. Photos of a lawmaker from New Jersey picking up trash and other debris from the floor of the Capitol well after midnight captivated headlines in the aftermath of the riot. In reflecting on that moment, Rep. Andy Kim shared a photo of his mom, noting it was the lessons she taught him that inspired his cleaning.

"Many of you asked me why I cleaned the Capitol on Jan 6," Kim wrote Thursday when tweeting a photograph of himself standing as a child with his mother in front of the U.S. Capitol. "I want to show you this photo. This is my mom, an immigrant from Korea, bringing me to DC for the first time. She took me to the Capitol and taught me to love and care for this nation that gave us everything."

While Kim has received a slew of praise for how he jumped in to bag up garbage after supporters of then-President Donald Trump trashed the Capitol during their attack, he's repeatedly downplayed his cleaning. "What I did isn't special," Kim tweeted Jan. 8. "It's the same thing that drives us to volunteer at a homeless shelter or donate to a food bank: the idea that if something is broken, we can work to fix it."

Kim shared a similar message with NBC Asian America, noting he had been walking through the mess of trash, water bottles, broken furniture, and Trump flags left behind by rioters in the Capitol rotunda after he'd voted to certify Joe Biden's election victory when he felt overcome. "I was just overwhelmed with emotion," the news outlet reported Kim said. "It’s a room that I love so much — it's the heart of the Capitol, literally the heart of this country. It pained me so much to see it in this kind of condition."

While a member of the press did catch the lawmaker bagging up trash, Kim's late-night cleaning wasn't a staged photo-op. Fellow New Jersey Rep. Tom Malinowski told the Associated Press it was sometime around 1 o'clock in the morning when he spotted Kim "on his hands and knees" picking up trash that had been kicked under a bench. "He was clearly not doing it for an audience," Malinowski said.

Kim said he moved on to picking up garbage in the Capitol crypt and National Statuary Hall as well as other adjacent rooms when he'd finished cleaning in the rotunda. As he cleaned he thought about his time in office, NBC Asian America reported. Kim became the first Asian American elected to represent New Jersey in Congress in 2018.

"I feel blessed to have this opportunity as a son of immigrants to be able to serve in Congress," Kim told the news outlet. "Democracy to me is this place of opportunity that is affording me a chance to do something extraordinary."