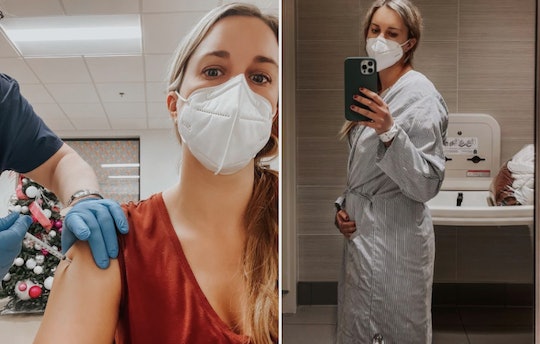 Doctor Speaks Out After Anti-Vaxxers Shared Misinformation About Her Miscarriage

As a family medicine physician with a large social media following, Dr. Michelle Rockwell — otherwise known as Doctor Mommy, MD — is more than aware there are pros and cons to social media. And though she's previously dealt with negative comments, she recently found herself battling a more dangerous foe: misinformation. Rockwell is now speaking out after anti-vaxxers falsely twisted a miscarriage she experienced into anti-COVID vaccine propaganda.

"I wish I could say I'm shocked, but, unfortunately, this is the state of social media these days," Rockwell, a mom of two and family medicine physician in Tulsa, tells Romper. "At first, I was obviously really mad because I'm a physician and a mom, and very supportive of the vaccine. [Women's] fears are being preyed upon by these anti-vaxx groups who are just willing to distort any information they have to further their agenda."

"How soulless and predatory of someone to take someone’s heartbreak and modify it to further their own agenda," Rockwell wrote on Instagram when addressing the misinformation. "If anyone actually went to my IG and scrolled through my posts they would see I miscarried 3 weeks before receiving the vaccine."

But as we all know, misinformation can spread like wildfire on social media, especially when it appears to center on shocking or chilling stories of tragedy. Undaunted, Rockwell got to work setting the record straight. "I reported every single post that I was able to find on Facebook," she says.

But Rockwell says flagging the posts for Facebook didn't prove to be much of a solution. "Facebook actually said that they were not violating community guidelines, which was pretty shocking to me because it was using my images, and my words and completely falsifying information," she says.

A Facebook spokesperson tells Romper the posts misconstruing Rockwell's miscarriage did in fact represent a violation of the social media platform's policies around COVID-19 vaccine claims and should have been removed. They have apologized for the error. Additionally, Facebook announced Monday that it would be removing posts that contain false claims and information about vaccines, including the COVID-19 vaccines.

When Facebook failed to remove the posts falsely linking her miscarriage to a COVID-19 vaccine, Rockwell began directly contacting the people who'd posted or shared it, urging them to take it down. "I was able to get two of those threads taken down," Rockwell says. But having to engage directly with those who'd posted the misinformation didn't come without a price. Rockwell says at least one person she messaged was "pretty nasty" and accused her of "killing people by talking about getting the vaccine."

Sadly, this isn't the first time anti-vaxxers have attempted to tie a woman's miscarriage to a vaccine, without citing any evidence. In November, Bachelor alum Ashley Spivey revealed she'd been targeted by a group of anti-vaxxers after she miscarried due to a nuchal cord accident. Anti-vaxxers baselessly tied Spivey's heartbreaking miscarriage to a flu shot she'd gotten and began harassing her through social media. Similarly, two other medical professionals have recently found themselves entangled in their own anti-vaxxer-led misinformation campaign after their tweets and images were distorted and fused into one false story.

Although there is currently a significant lack of data regarding COVID-19 vaccines and pregnant people due to the fact that pregnant people were not included in vaccine trials, both the U.S. Centers for Disease Control and Prevention (CDC) and the World Health Organization have said pregnant people can get a COVID vaccine as the technology behind the vaccine is known to be safe. "Based on what we know about this kind of vaccine, we don't have any specific reason to believe there will be specific risks that would outweigh the benefits of vaccination for pregnant women," WHO guidance on the Moderna vaccine reads. "For this reason, those pregnant women at high risk of exposure to SARS-CoV-2 (e.g. health workers) or who have comorbidities which add to their risk of severe disease, may be vaccinated in consultation with their health care provider."

Rockwell understands why the lack of data may give some pregnant people pause. "I absolutely understand women being vaccine-hesitant in this case because we don't have data," Rockwell says. "There's not much, if any, data right now and that's the truth. But to twist this information in this way, that's just false."

Since coming forward about the misinformation, Rockwell says she has been flooded with kind messages of support, making her hopeful some good may come from her horrible experience. "I'm just overwhelmed with gratitude and hope that maybe this makes some sort of difference and makes people just pause when they read something and consider is this true," she says. "And then pause again before they consider re-sharing it."