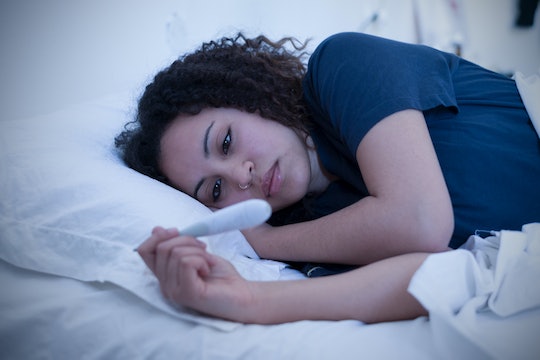 If you're peeing on a stick, you probably aren't ambivalent about the results. Most people who take the step to actually take a pregnancy test either really want to be pregnant or are hoping for the reassurance that their period is right around the corner. So while you're waiting those two long minutes for the results, the thought might cross your mind: Are pregnancy tests ever wrong? Because you need to be able to trust the results when those pink lines show up.

Pregnancy tests can be wrong, for a number of reasons including birth control and your timing (when you take the test and check the results). Occasionally, a pregnancy test can result in a false positive or a false negative test, but according to the Mayo Clinic, a false negative result is much more common to get than a false positive. That means you're more like to actually be pregnant (but think you're not) than think you're pregnant (and not be).

How could you get a false positive result on a pregnancy test? The Mayo Clinic cautioned, "A false-positive might happen if you had a pregnancy loss soon after the fertilized egg attached to your uterine lining (biochemical pregnancy) or you take a pregnancy test too soon after taking a fertility drug that contains HCG." They also reported that an ectopic pregnancy, menopause, or various problems with your ovaries could contribute to a pregnancy test result that's inaccurate.

Essentially that means you either had a very early miscarriage, aka a chemical pregnancy, or any fertility-assisting products or procedures you were introducing affected the results of your pregnancy test. Fertility treatments can mess with pregnancy tests, because one of the tools fertility specialists use to trigger ovulation is an hCG shot, explained New Kids-Center. If the extra hCG hasn't worked its way out of your system before you take a pregnancy test, it could cause a false positive result.

You could get a false negative result if you take a test before the fertilized egg has a chance to reach the uterine wall and implant. The New Kids-Center explained, "it may be another few days before the body begins producing enough hCG, the pregnancy hormone, to be detected." So while you technically can take a pregnancy test on the first day of your missed period, they said, the results are actually much more reliable if you take the test a week after your missed period. In the early days of pregnancy, one day can affect how much hCG is in your body and able to be detected by a pregnancy test. For an even more accurate result, "The best time of day to take a home pregnancy test is first thing in the morning because your urine is the most concentrated," according to Josie Bouchier women's holistic health expert.

Other reasons for a false negative result? Taking the test too early, checking the results too soon, or using an expired pregnancy test (sounds obvious, but it happens), according to Pregnancy Corner.

So what's the best way to keep from getting an inaccurate result when you take a pregnancy test? Make sure you wait until you actually miss your period to take the test, and use your first pee of the day to get the most accurate read, according to What To Expect.