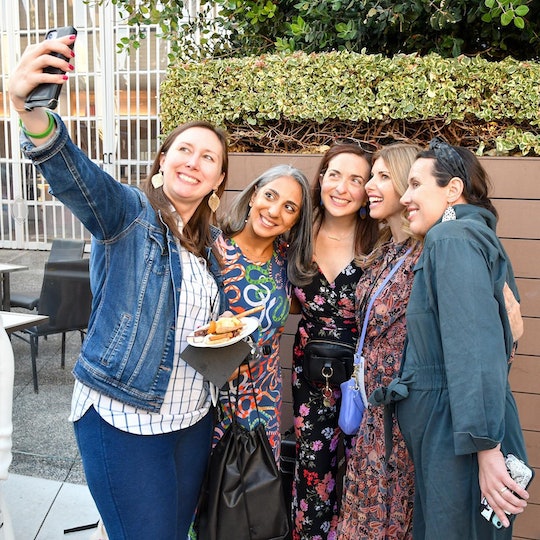 The Mom 2.0 community came together in person for the first time since 2019.

“We are not the same people,” said Laura Mayes to a ballroom full of moms last month. She was addressing an audience who’d pivoted again and again through a pandemic and up to the moment we find ourselves in now: a limbo between almost-but-not normalcy and a still ongoing pandemic. Mayes, an Emmy-winning writer and co-founder of Mom 2.0, was welcoming the crowd to the start of the organization’s 3-day summit in Los Angeles. For the first time since 2019, the Mom 2.0 community had come together to talk in-person about everything from growing a business and making money as a content creator, to screen-free activities for little ones who are no longer screeching from the other room that their virtual classroom is frozen. It’s been a long journey to bring moms back IRL, and we are not the same.

The Mom 2.0 Summit is an annual gathering of influencers and leaders who create content in parenting, food, politics, social change, travel, and more. This year, the focus of the various keynotes and panels varied from how to start a business, to a panel featuring Hello Sunshine CEO Sarah Harden on getting started in the Web 3 world. One through-line could be found in every session: the need to figure out a better way forward, as individuals and as communities. The pandemic exposed the gaping holes in our society at large, and mothers especially felt — and are feeling — the burden.

And as keynote speaker Dr. Anna Malaika Tubbs, author of The Three Mothers: How the Mothers of Martin Luther King, Jr., Malcolm X, and James Baldwin Shaped a Nation, said to an enthusiastic room, “We're not just feeling tired or unsupported — we are unsupported. The system is built for you to feel tired. Our country owes us more.”

Indeed, the lack of support for moms is not just a feeling — it’s often a physical threat. “The U.S. today is considered the most dangerous developed nation in which to give birth,” said Stacey Stewart, president and CEO of March of Dimes, which was the Summit’s Official Cause Partner.

The road back to IRL has been tough, a point Mayes addressed in her welcome speech where she invited attendees to spread out in the ballroom and “take a breath” if things felt too overwhelming. Summit organizers even arranged color-coded wristbands for attendees to show if they were ready to hug and shake hands or preferred to stay socially distant. (“Are we hugging?” was a common refrain over the three days.)

I felt both those feelings through my time there, but most of all, I felt a need to be there, in person, among moms again. “We're all going through something, but we all crave each other, right?” said Bridgid Coulter, founder of Blackbird Collective, at a session about mental health moderated by Romper managing editor, April Daniels Hussar.

Being the 2022 version of ourselves can feel like a disconnect between the external world, where everyday activities are becoming more and more commonplace, and the inner self, which may still be all about cocooning on the couch. Rosie Nguyen, AKA The Hustling Mama, captured the Summit’s mood in an Instagram video dragging herself face-down across the floor to the meetings with all the people.

“Sure, I had to relearn how to socialize with people again after a two-year absence,” said Nguyen. “But it was worth seeing the joyful energy that filled the conference rooms of mothers finally putting themselves first and wanting to thrive and not just survive.”

It was perhaps incredibly fitting that the presenting sponsor of this year’s summit was Kardashian-favorite CBD gummy company, House of Wise. How many attendees scarfed down their free stress gummy samples before heading into a workshop, and stuffed their sex gummy samples into their suitcases for ahem later? (Me.)

Indeed, after two years of sheer survival, “thriving” feels different. “We've learned how to go too much and take on too much,” said Mayes from the mainstage. “And we need to learn how to un-do that.”

Dr. Sheryl Gonzalez Ziegler, another speaker at the Summit, has a name for this moment: residual collective trauma. “We all experience something on a collective level, and now we’re trying to make sense of it,” says Ziegler, who is a therapist and the author of Mommy Burnout. During the height of the pandemic, she liked to say that we were all weathering the same storm, but in different boats. “Now it’s after the storm, but we’re in different boats.”

We have all been through a lot, and it shows, so how do we meet the moment, preferably with attainable action items, because this mom is feeling a little overwhelmed?

“I’ve got you,” says Dr. Ziegler. Below, Zeigler’s everyday tips for feeling less overwhelmed, right in the moment, right now:

First, acknowledge what you’ve been through without qualifiers.

It was a hard two years. Many people died in the U.S. and around the world. A war is raging, we are in a climate crisis, and Betty White is still dead. Sometimes amidst all the devastating news, it can feel like there is no space to mourn the “little” things, like longing for the comfort of a hug from your best friend, a job loss, or two missed birthday celebrations.

“I think it’s really more important than ever to really honor this time, and mark this time and process it,” says Dr. Ziegler. Women often discount our own struggles, but therapists like to say, “What you resist, persists.”

Our old dog died during one of the surges. One morning, he flopped over and wailed in distress for hours while I called every pet hospital in the Los Angeles area, and my kids dug a grave in the backyard — just in case. It was a chaotic and sad time that we just had to move on from because the pandemic was raging.

To truly process what happened, we need to acknowledge what we’ve been through, and share it with people, says Dr. Ziegler. “Set up a book night or a happy hour, and say, ‘Anybody else want to get together and just talk about what the hell we all just went through?’”

From there, the stories will flow, and the healing can begin.

Cultivate a spectrum of friendship.

It’s no secret: women are lonely and often get stuck defining friendship as the one best friend from childhood who knows our deepest secrets. That friend is gold, but only having one can really be isolating. You don’t have to get everything from every person, Ziegler says. Instead, she Ziegler suggests cultivating connections with a wider range of people — the co-worker who loves an after-work cocktail, the mom friends you can bond with over the administration at your kids’ school, the neighbor who runs a great book club. These relationships can keep you grounded and connected to a purpose.

Keep (or start) taking those walks.

It’s not about exercise. The walks around the neighborhood don’t tone your calves (I’ve tried), but they feed the brain and body with fresh air and sunshine, which all human beings need in order to regulate their circadian rhythm (the natural sleep-wake cycle). The walks are for your mental health, and Dr. Ziegler is prescribing 20 minutes of walking, five days a week.

Romper was proud to be a media partner of the Mom 2.0 Summit.

More Like This
How Do I Rediscover My Sexuality When I’m Completely Touched Out?
How To Ask Your Partner For Support When You Need It
Toe-tally Cute Summer Pedicure Ideas
How To Approach The Topic Of Emotional Labor With Your Partner