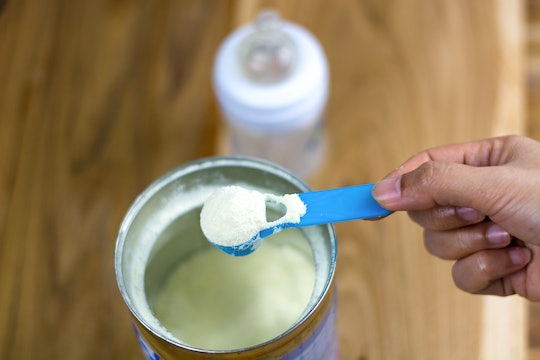 The Baby Formula Recall Has Expanded: Here's What Parents Need To Know

On Feb. 17, Abbott Nutrition announced a voluntary recall of some of its powdered formula products — Similac, Alimentum, and EleCare — produced in its facility in Sturgis, Michigan. This was prompted by an investigation and warning from the Food and Drug Administration (FDA) that cases of bacterial infections from Cronobacter sakazakii and Salmonella Newport were found to have contributed to at least four infant illnesses and one possible death in three states and that all of the children had been fed formula produced in the Sturgis plant. On Feb. 28, the FDA issued another warning followed by a second Abbot recall, this time for certain batches of Similac PM 60-40 also produced in the Sturgis plant.

This decision was made after an additional report of illness due to Cronobacter sakazakii in a child fed powdered infant formula produced at the facility. Sadly, the FDA reports that this infection may have been a contributing cause of death for this patient.

Abbot’s recall website offers additional information on the recall, including a way to check the lot number on any formula purchased. The FDA advises consumers not to use Similac, Alimentum, or EleCare powdered infant formulas if the first two digits of the code are 22 through 37, the code on the container contains K8, SH or Z2, and the expiration date is 4-1-2022 (APR 2022) or later. The recall for Similac PM 60-40 is more limited, specifically to cans with lot cod 27032K80 or cases with the code 27032K800.

You can find this information on the bottom of the can:

Neither the recall nor the FDA advisory includes any liquid or metabolic deficiency nutrition formulas. Affected products can be found across the United States and were likely shipped internationally as well.

On its recall website, Abbott contends that all products are tested for Cronobacter and Salmonella before distribution and that while an independent investigation of the Sturgis facility found Cronobacter, it was in a non-product contact areas and said it found no trace of Salmonella. The ongoing FDA investigation, however, found several positive Cronobacter results from environmental samples of the plant as well “adverse inspectional observations by the FDA investigators” and internal records documenting cronobacter contamination of products that had been destroyed (i.e. never went to market).

“As this is a product used as the sole source of nutrition for many of our nation’s newborns and infants, the FDA is deeply concerned about these reports of bacterial infections,” said Frank Yiannas, FDA Deputy Commissioner for Food Policy and Response in a statement. “We want to reassure the public that we’re working diligently with our partners to investigate complaints related to these products, which we recognize include infant formula produced at this facility, while we work to resolve this safety concern as quickly as possible.”

On social media, concerned parents are voicing their fear and frustration over the recall. “So not only is it hard to find the formula but when you do find it its under recall,” one commenter wrote on Similac US’s Facebook announcement of the recall. “Bye bye four cans of total comfort it took weeks to find.”

“This Similac Formula recall is a disaster,” tweeted @CMarlatt25. “What do families do? Between supply chain issues and how babies react to different [formulas] we are lost.”

According to the CDC — which, along with the United States Department of Agriculture, is investigating the reports of illness and death — Cronobacter can cause severe and life-threatening infections or meningitis. Symptoms may include fever and poor feeding, crying, jaundice (when the skin or eyes get a yellow-ish hue) and/or very low energy. Some babies may also have seizures. The CDC notes that these infections are rare but can be deadly, particularly in babies. Salmonella infection is marked by diarrhea, vomiting, fever, and abdominal cramps.

If your child has been exposed to any of the affected products and is experiencing symptoms, contact your pediatrician and seek care immediately. Parents and caregivers of infants who have used these products, and are concerned about the health of their child, should contact their child’s health care provider. If your child is experiencing any of these symptoms, you should notify your child’s healthcare provider and seek medical care for your child immediately.

More Like This
Here’s What You Need To Know About That Viral 1960s Baby Formula “Recipe”
Lawmakers Passed Two Bills To Address The Baby Formula Shortage
This Free Website Connects Parents Who Need Formula With Those Who Have It
Abbot's Formula-Producing Plant Can Reopen In As Early As 2 Weeks — Now What?

This article was originally published on Feb. 18, 2022