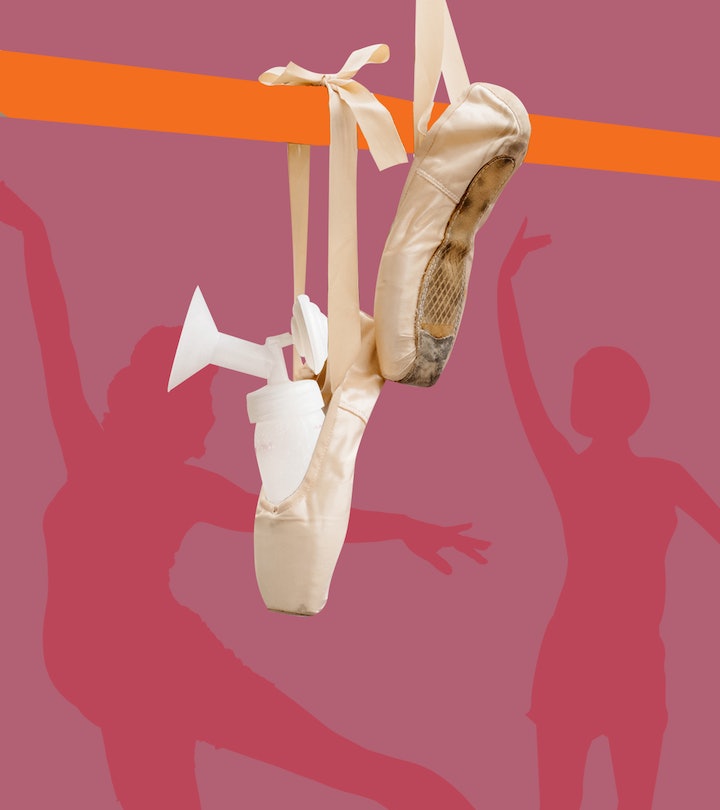 Ballerinas Are Headed Back To Work, With Pandemic Babies In Tow

The past two years gave dancers an unprecedented opportunity to start families, but with birth injuries, unpredictable schedules, and low wages, being a ballerina postpartum is as challenging as it sounds.

In June, Allison DeBona, a first soloist at Ballet West, posted photos with a long and heartfelt caption to Instagram about her decision to give up breastfeeding to save her ballet career.

"As I’ve given up the most precious bond between me and Ajax this week, to feel one last honest attempt of my career as a ballerina,” she wrote, “I can only hope and pray that it will not be founded with regret.” The accompanying photos documented DeBona’s changing postpartum body, dancing over the last few years, and some images of her with her son. “I couldn't keep weight on,” she told me when we talked about her decision to stop breastfeeding. “I started losing way more weight than I could to be able to do my job. [I was] breaking down because I was exhausted.”

Once she returned to rehearsals and performing after Covid restrictions were lifted late last year, DeBona was suddenly dancing eight hours a day. “There's a reason why women hold on to extra weight after they have a baby and they breastfeed, because you need that,” she said. When she returned to the studio for the current Ballet West season, she knew she couldn’t put herself through that again. “I needed to come back this season with my own body because I literally just couldn't do it anymore,” she said.

Her choice — between using her body to perform and using her body to feed her baby — is particularly relevant as more and more ballet dancers return to studios and stages across the country after the ballet Covid baby boom. Since many dancers used their unplanned time off to have babies without further career disruption — getting pregnant has historically been a career-ending decision — they were able to devote their bodies and time to mothering on their terms. Now, they are recruiting their bodies for their careers again, too.

They are experiencing the identity-splitting all new mothers undergo when they return to work postpartum, but with the added layer of needing their bodies to be performance-ready.

As long as people are breastfeeding, they produce relaxin, a hormone that develops during pregnancy to relax their muscles in preparation for giving birth. Megan Fairchild, a principal dancer with New York City Ballet who gave birth to twins earlier this year, breastfed them. But her physical therapist who worked with her through both her pregnancies warned her, “You won't be able to push yourself physically until [the relaxin is] out [of your system]. And it takes a couple months even after you stopped breastfeeding...” Fairchild wanted to be able to return to work full-time with New York City Ballet when they returned to the stage this September.

“I kind of did the math and figured out when I wanted to have that hormone out of my body,” she explained. Fairchild said some dancers are able to dance even with relaxin, but she has always had a more difficult time. “I can’t do fifth position, I can’t jump onto pointe in a pointe shoe.” Without being able to do those basic parts of her job, she couldn’t return to work safely.

As dancers return to work around the country after so many used the time off from the pandemic to have babies, they are experiencing the identity-splitting all new mothers undergo when they return to work postpartum, but with the added layer of needing their bodies to be performance-ready. As it is for so many people, their bodies and careers feel different postpartum, and companies are catching up with other workplaces by ensuring their returning dancers have protections and support in place to accommodate their new identities and priorities.

Dance Theatre of Harlem's Ingrid Silva has posted photos to Instagram of her taking barre (the first half of a ballet class, when dancers warm up while holding onto a wooden bar) with her new baby, Laura, in a front carrier. Her followers marveled at how Laura followed her mother’s movement and imitated her arms. Silva said in an interview that the day she filmed that video, Laura was particularly fussy. “And it was like, I really want to finish this barre. What can I do? And then I just put her in the sling and kept taking barre.” Silva brings Laura to the studio when her husband can’t watch her, and recently brought her on a mini tour for the first time, where Laura watched her mother on stage for the first time, and hung out in her dressing room. During a rehearsal in which Laura was fussing, Silva’s director walked over to Laura and picked her up and put her in the sling to wear her while her mother worked. “It's really nice to see her embracing that moment with me,” said Silva. “I thought she was gonna get mad, or my dancer friends would get mad, but everyone was supporting me.”

“And throughout my whole pregnancy, I was thinking, As soon as I can, I'll go back to work. There's that internal pressure, like my body's my instrument, I will fine-tune it and go back to top shape as soon as I can, and suddenly, the pandemic hit, and we were given time, and I didn't realize how important that time was until I was given that time.”

Most major dance companies provide 12 weeks of leave after giving birth, which for many dancers means their birth injuries barely have time to heal before they are put to the test by dancing. But the pandemic gave dancers extra time to heal from giving birth.

“When I got pregnant, there was no pandemic,” said Ludmila Bizalion, a dancer with San Francisco Ballet. “And throughout my whole pregnancy, I was thinking, As soon as I can, I'll go back to work. There's that internal pressure, like my body's my instrument, I will fine-tune it and go back to top shape as soon as I can, and suddenly, the pandemic hit, and we were given time, and I didn't realize how important that time was until I was given that time.”

When Bizalion did return to dancing, she said her body “was a wreck.” She didn’t feel comfortable taking over-the-counter medication for the pain while she was breastfeeding. “For me as a dancer to go almost two years without ibuprofen was something unimaginable,” she said. She had to get used to a new body with limitations, a new center of gravity, and different aches and pains. “Because I'm a dancer and trying to jump and turn again, I started feeling pain when I was doing pirouettes, for example. Unless you're doing, like, a turn with a leg up, you wouldn't notice this.” Bizalion had pelvic floor dysfunction and had developed a granulation tissue — an excess of tissue that can develop when a tear from birth essentially "over-heals" —that pulled her muscles, so she did extensive pelvic floor physical therapy and had surgery to correct these birth injuries. “I had the time to do that with the pandemic,” she said.

Megan Fairchild sees a physical therapist to help improve her range of movement and correct her diastasis recti, a separation of the abs, for which ballet dancers are at high risk. They work on releasing Faichild’s obliques so she can lift her leg higher in arabesque and relaxing her rhomboid muscles, tight from breastfeeding. “If it wasn't for her, I would be pretty lost,” Fairchild admitted. “I paid her $125 to see her for 45 minutes. And I think from the pandemic, our deductible went up so I'll probably have to pay her every time I see her.”

While 12 weeks of paid family leave is stipulated in most contracts under the American Guild of Musical Artists (with the exception of Miami City Ballet), dancers rarely have true time off, since they need to be ready to perform within months, or even weeks, of returning to work. This means their time off is spent maintaining or regaining strength, flexibility, and their former abilities, doing yoga, gyrotonics, and Pilates even when they are not in ballet classes. These are, unsurprisingly, expenses they are paying out of pocket.

Ingrid Silva has also been paying for extra therapies and training to regain strength after giving birth. “I've been doing yoga, I've been doing ballet classes, I've been going to the gym, I have a personal trainer who's been working with me. So I'm trying to rebuild myself.” But although they benefit her work, these expenses are not covered by insurance. “Those side activities are out of my pocket, you know? So that would be a great way for [companies] to support us to get back in shape.”

“I can't give my body to him like that anymore,” DeBona often thought to herself during a particularly grueling Nutcracker season. “That was hard. And then I would feel guilty.”

The nightmarish logistical and financial costs of child care were mentioned by several of the people interviewed. “Dancers don't make that much money,” Allison DeBona said. “And the hours are strange. They don't coincide with [regular] work hours. We only find out our schedules two days in advance.” (Numbers vary widely, but the Bureau of Labor and Statistics cites a professional dancer's median hourly pay as $18.58 in May 2020.) Some companies, including American Ballet Theatre, have day cares in their facilities, which allows children to see their parents even on days they are performing, and enables mothers to continue breastfeeding for longer if they want, but this is not yet the norm.

DeBona also said a long day of dancing and partnering magnified the feeling of being “touched out” when she came home. “I can't give my body to him like that anymore,” she often thought to herself during a particularly grueling Nutcracker season. “That was hard. And then I would feel guilty.”

In Chloe Angyal’s Turning Pointe, Kathleen McGuire, a Dance Magazine writer, told Angyal that dance companies are failing dancers who need extra support for their mental health, whether they’re postpartum or not. DeBona, who suffered from postpartum depression, urges companies to support the mental health of dancers returning to work after giving birth. When people in her company told her how skinny she was after giving birth, she felt like they were ignoring how depressed she was. “I might have 'lost the weight,' but it's not my body,” she said. “My hips are in a different place, my ribs are in a different place.”

Once they’re back in the studio, dancers’ bodies need to do more than look the part — they need to build up the strength they need to perform night after night, and to relearn their limitations. Companies can shift the culture by celebrating a slow, methodical return, and they can implement real policy changes by providing dancers with the therapies and child care options they need to do their jobs. According to DeBona, a more holistic view of dancers returning to work means seeing them not just as dancers, but as mothers with shifting priorities who cannot neatly compartmentalize their lives. “That goes for really any, any job, but for us, our bodies are our jobs.”