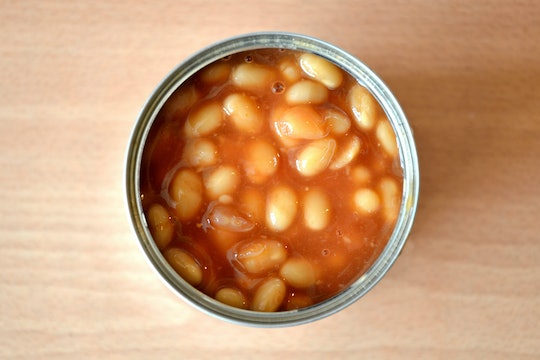 It involves parenting, a can of baked beans, and resurfaced tweets.

They say that there's a new star of Twitter every day... and you don't want to be it. On Sunday night, it was "Bean Dad", who has deleted his Twitter account after a series of events that involves parenting, baked beans, and resurfaced tweets with racial slurs.

"Bean Dad" is John Roderick. He is the front man of the Seattle-based indie band The Long Winters. He is also the cohost of several podcasts, including Roderick On The Line, Road Work, Friendly Fire, and Omnibus, which he hosts alongside Ken Jennings of Jeopardy fame.

The "Bean Dad" saga began with a thread of (now deleted) tweets where Roderick shared a long story about his 9-year-old daughter, who came up to her father saying she was hungry. When he suggested baked beans, he came to realize that she had never been taught how to use a can opener. Though he said he was "incredulous," he was "overjoyed" because "a Teaching Moment just dropped in my lap," as he wrote on Twitter.

Now, most parents would probably agree up to this point that, yes, this is an excellent teaching moment. Using a can opener is a necessary (though easily overlooked) life skill. However, most parents, at this point, would probably teach their children the way kids actually learn — explain (perhaps by asking them questions so they can figure things out on their own), demonstrate, let them try. Bean Dad, however, was all about making her figure it out by herself, which in and of itself is sort of questionable... can openers are sort of weird if you've never used one before, and he took pains to stress that his daughter was not "mechanically minded." But it took an even weirder, more questionable turn when he said, after several frustrated attempts, according to his deleted tweets, "Sweetheart, neither of us will eat another bite today until we get into this can of beans."

The entire 23-part saga can be found below. In summary, it took six hours, but Roderick's daughter finally got the can open. He proudly concluded that the can opener would serve as an allegory for his daughter moving forward, and that he wished he had "more stories like this."

Reaction To The Story Was Varied But Overwhelmingly Negative

While Roderick had some supporters, including Jennings, who he described Roderick as a "loving and attentive dad" on Twitter, the vast majority of people to respond to the thread reacted negatively, ranging from humor to mocking the overblown style of the telling (terms like "address the can" and "the tool is made to be pleasing" are used throughout), to bafflement, to accusations of child abuse.

Now, this in and of itself, probably wouldn't have resulted in much more than a "starring role" on Twitter for a day. People could argue on how serious the issue was and then probably forget about it in a few days. But as users dived into Roderick's past tweets, as The Wrap reported, they uncovered numerous, unquestionably problematic tweets using slurs against Jews, Black people, and the disabled and LGBTQ+ communities.

While the resurfaced tweets were roundly denounced, some came to Roderick's defense, including comedian Michael Ian Black, who said the years-old tweets were "obviously jokes, not proof of any abhorrent beliefs." Jennings also defended his cohost against accusations of bigotry. "If we're word-searching through old tweets now, it's pretty easy to find what he actually thinks about anti-Semitism. On our show he's always the pro-Israel one!"

The situation has nevertheless resulted in Roderick deleting his Twitter account as of Monday. It has also cost him a partnership. Another podcast, My Brother, My Brother & Me, has announced they will no longer be using Roderick's "It’s A Departure" as their theme song. They cited the situation as being "emblematic of a pattern of behavior that is antithetical to the energy we try to bring to the things we do."

Roderick Has Since Issued An Apology

On Jan. 5, Roderick shared an apology on his website where he said his story was "poorly told." "I didn’t share how much laughing we were doing, how we had a bowl of pistachios between us all day as we worked on the problem, or that we’d both had a full breakfast together a few hours before. Her mother was in the room with us all day and alternately laughing at us and telling us to be quiet while she worked on her laptop. We all took turns on the jigsaw puzzle," he wrote. "I framed the story with me as the a**hole dad because that’s my comedic persona and my fans and friends know it’s 'a bit'."

"I reread the story and saw clearly that I’d framed it so poorly, so insensitively," his apology continued. "Bean Dad, full of braggadocio and dickhead swagger, was hurting people. I’d conjured an abusive parent that many people recognized from real life. I am deeply sorry for having precipitated more hurt in the world, for having prolonged or exacerbated it by fighting back and being flippant when confronted, and for taking my Twitter feed offline yesterday instead of facing the music."

As for what he described as "many racist, anti-Semitic, hurtful and slur-filled tweets" from his "early days on Twitter," Roderick wrote that they "were intended to be ironic, sarcastic" when he wrote them and apologized for the hurt they caused. "My language wasn’t appropriate then or now and reflecting on that has been part of my continuing education as an adult who wants to be a good ally," he wrote. "That education is ongoing, and this experience will have a profound effect on the way I conduct myself throughout the rest of my life."

Editor's Note: This article has been updated to include Roderick's apology published on Jan. 5.