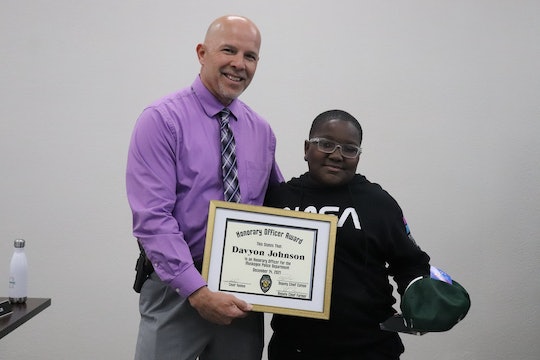 Davyon Johnson says he’d learned how to do the Heimlich maneuver by watching YouTube videos.

Sixth-grader Davyon Johnson has proved you’re never too young to save a life — or two. Earlier this month, the 11-year-old Oklahoma resident saved the lives of not one but two different people all on the same day. Johnson performed the Heimlich maneuver on a choking classmate while at school and later helped a woman escape a house fire.

While Dec. 9 likely began for Johnson just as any other day might have, it ended with the sixth-grader named a hero. According to The Enid News & Eagle, a classmate of Johnson’s at 6th and 7th Grade Academy in Muskogee, Oklahoma, began choking on the cap of a water bottle in one of the school's hallways. Johnson’s principal told the paper the student had been looking to fill up a water bottle and used their teeth to remove the bottle’s cap. The cap then slipped from their teeth and partway down their throat. Thankfully, the choking student managed to stumble into a nearby classroom — Johnson’s classroom.

“Davyon immediately sprinted over and did the Heimlich maneuver,” principal Latricia Dawkins told the paper. “From the account of the witnesses, when he did it the bottle cap popped out.”

But Johnson’s heroic actions didn’t end there. Later that same day, the 11-year-old saw a woman who appeared to be having some trouble quickly escaping her house after it had caught fire. “I thought, ‘Oh she’s not moving fast enough,’” Johnson said of the incident in an interview with KOTV. “And so I ran across the street and helped her to her truck.”

Johnson’s mother has said she’s proud, but not wholly surprised by her son’s heroics. She told The Enid News & Eagle her brother is an emergency medical technician (EMT). In fact, staff members at Johnson’s school have reportedly heard the sixth-grader say he’d like to follow in his uncle’s footsteps and become an EMT himself.

“He has always indicated that he wants to be an EMT,” Dawkins said of Johnson. “So he got to put that desire into action.”