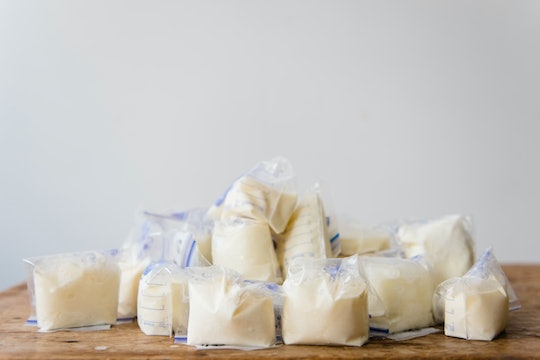 Strangers are stepping in to help fulfill one mother’s wish of seeing her 5-month-old son breastfed until his first birthday.

When Megan Richards died from complications related to Covid-19 in November, she left behind six children, including an infant son. Before getting sick, the Missouri mom had been planning to breastfeed her youngest, 5-month-old Myles, until at least his first birthday. Megan’s family is hoping they’ll still be able to fulfill her wish — and thanks to generous donations of breast milk from strangers, they just may be able to.

Megan gave birth to Myles in July, roughly four months before she, Michael, and all six of their children contracted Covid-19, USA Today reported. But while Michael and the kids all experienced only mild symptoms, Megan, who was not vaccinated against Covid-19, faired much worse.

Even when sick, however, Megan remained committed to her plan of providing Myles with a year’s worth of breast milk. “Even when she got sick and I was trying to keep her in bed, and just try to get her to rest, I talked to her about it maybe being time to stop pumping — she’d been pumping to be able to feed him with a bottle — and she refused,” Michael told ABC.

When Megan’s condition continued to decline, she was hospitalized and diagnosed with Covid pneumonia. She died Nov. 15 after too much fluid built up around her heart, People reported.

Since Megan’s death, her family has been collecting breast milk donations to keep Myles fed and fulfill Megan’s wish. According to Good Morning America, the family has received roughly 400 ounces of donated breast milk as well as a freezer to store it in since first putting out the call in a WDAF-TV article.

“The first donation that we received came from a woman named Megan,” Megan’s sister Brittany Eppenauer told Good Morning America, adding that nearly 300 women have contacted the family looking to donate their breast milk to Myles. “It’s overwhelming to know that other moms care that much, to make sure that we can fulfill my sister’s wishes.”

In order to fulfill Megan’s wish of providing Myles with breast milk for the first year of his life, her family will need an estimated 10,000 ounces, Eppenauer told Good Morning America.

In the wake of Megan’s death, her family is also encouraging everyone to get vaccinated against Covid-19. “I regret that I didn't push her to get it,” Michael told WDAF-TV.

Those interested in donating breast milk to the Richard’s family can contact Eppenauer via email at brittany.eppenauer@gmail.com.

More Like This
"Crybaby Ambulance" In Europe Will Help Exhausted Parents
Reddit Applauds Mom Of Five Who Stood Her Ground & Left Sleeping Dad Behind
13-Month-Old Got Booked On Separate International Flight From Parents
Why Does My Baby Cough While Breastfeeding? Experts Explain