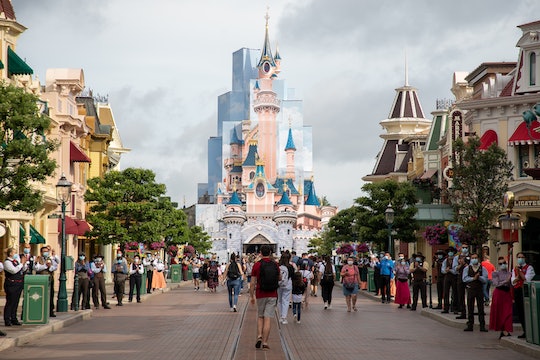 “I felt completely vulnerable, totally intimidated, and quite afraid.”

A nursing Australian mom claimed she felt less than welcomed at the Happiest Place on Earth after Disneyland Paris security guards reportedly surrounded her and ordered her to stop breastfeeding. News of the incident has sparked outrage among women and parents and caught the attention of two French lawmakers, who urged the theme park to apologize and reconsider its stance on nursing.

According to SBS News, Laura, a 33-year-old Australian currently living in France, was visiting Disneyland Paris with her husband and two children. At one point in their visit, Laura’s husband accompanied their 5-year-old on a ride while Laura sat down on a nearby bench to breastfeed their 2-month-old. Within moments she was surrounded by three security guards who told her needed to stop and cover up or move to the park’s single baby care room.

“I had my daughter to my breast with three people around me berating me to stop something I consider a completely natural and normal part of life,” Laura, who has asked media outlets not to identify her using her surname, told AFP. “I felt completely vulnerable, totally intimidated, and quite afraid.”

In comments to SBS News, Laura accused the park’s security team of attempting to make her “feel shame” for needing to breastfeed. She claimed the guards told her that breastfeeding was “offensive” to the park’s other patrons.

But at least one nearby patron — a fellow mother — disagreed with the guards and stepped forward to make her opinion on the matter clear. “She sat down and started feeding her child in solidarity with me,” Laura told AFP. “I just burst into tears, I was overwhelmed by her kindness.”

Laura, who opted to share her experience in hopes it could help reduce stigma against public nursing, received an outpouring of support across social media as well. In fact, her story caught the attention of Marlene Schiappa, a junior interior minister, and Fiona Lazaar, a member of the French National Assembly. Both criticized the park for initially responding to reports of Laura’s experience with a note that nursing parents are provided with a baby care room, in which they could breastfeed.

“Breastfeeding a baby is not an offense,” AFP reported Schiappa tweeted to Disneyland Paris. “It’s good that you have dedicated rooms but no one knows when and where a baby will be hungry.”

Lazaar, who has previously proposed a law that would make attempts to prevent a parent from breastfeeding a child in public punishable with a 1,500-euro fine, noted she’d written directly to Disneyland Paris CEO Natacha Rafalski. “Every woman should be able to feed her child as and where she wants,” she tweeted.

The theme park has since issued a second statement over Twitter, extending “sincere apologies” to the mother involved and noting it “deeply regretted” the situation that had occurred. “The request made of it is not in line with our internal regulations and our values,” the park said. “There is no restriction on breastfeeding at Disneyland Paris. Disneyland Paris provides parents with young children with various service locations within the destination for those who would prefer a dedicated location. Disneyland Paris is committed to providing a welcoming and inclusive environment for all families.”