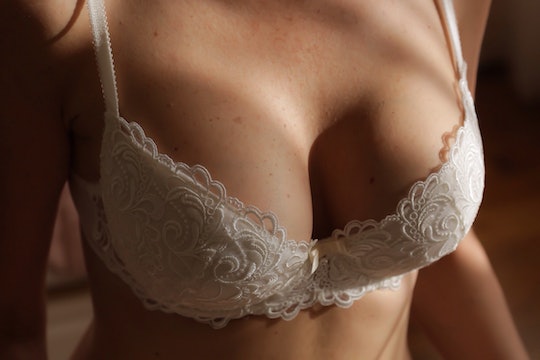 Yes, Your Boobs Can Leak When You Orgasm Even If You're Not Pregnant Or Breastfeeding

It happens, and it’s nothing to worry about.

If your first reaction to that headline was, "Are you kidding me? We have to leak during orgasm?" you're not the only one. Certain parts about having breasts can seem really unnecessary — at least until you learn about the science behind them, and then it makes a little more sense. Once you come to grips with the fact that your breasts might be leaking, you'll probably wonder what exactly leaks from your breasts during this intimate moment. It'll be reassuring to know what’s going on in your body... right?

What leaks from your breasts during orgasm (and why it happens) depends whether you are pregnant, breastfeeding, or none of the above. But one thing is certain: Whether you’re not breastfeeding and are just experiencing some harmless discharge, or you’re leaking breast milk while breastfeeding, it’s all totally normal. The same goes for leakage while you’re pregnant — while this kind of spillage will be different from the other two scenarios, it’s still nothing to worry about.

If you’re concerned, it doesn’t hurt to visit the doctor, but before you do, rule out one of the following (highly likely) situations. While this may not be the hottest thing to happen during sexy time with your SO, it’s just a part of being human.

Breast Leakage While Not Pregnant Or Breastfeeding

You might be more than confused if you appear to be lactating but not pregnant or breastfeeding. But Jacqueline Kincer, IBCLC, CSOM, a lactation consultant and breastfeeding expert, tells Romper that "nipple discharge can occur outside of lactation due to frequent nipple stimulation, certain medication conditions or medications, as well as abundant release of oxytocin, [which occurs during] during orgasm." The normal discharge for a non-pregnant, non-breastfeeding person is often "in very small amounts and typically cloudy or clear in appearance,” she says. “It can be sticky as well."

There won't be much of the discharge, and in fact, your partner might not even notice it. And it's not milk — at least, it’s not usually milk. “This discharge is not breast milk unless nipple stimulation is a regular occurrence for you,” Kincer says. “You can induce lactation even if you’ve never been pregnant before!”

If leaking is related to oxytocin release, Kincer says it will typically occur in both nipples. “If you’re only leaking from one nipple, it’s typically a sign of a problem, and you should see a doctor since it could indicate something like an infection or cancer.” Especially if you notice anything usual about your breasts, such as a new lump or strange texture, it’s worth bringing this up to your healthcare provider.

According to Kincer, the reason the breasts leak milk is so the milk doesn’t stagnate, which can cause issues like clogged ducts or mastitis. “Anything that makes you feel good can release oxytocin,” she says. “The most common ways it happens are sex, getting a massage, thinking about your baby, feelings of happiness, or being very relaxed.”

That means that if you are breastfeeding and experience leakage during orgasm, it's breast milk that's dripping, and you can probably expect that to happen when you orgasm until you wean your baby. However, Kincer explains that there might be ways to keep breast leakage to a minimum: “You can prevent this leakage by breastfeeding or pumping before having sex, so there’s less milk available to leak out,” she says. “You can also wear breast pads with a bra, or simply apply pressure to the nipples by gently pushing them in toward the chest wall for five to 10 seconds to stop the leaking.”

Finally, if you are pregnant and experiencing leakage during orgasm (or even at other times outside of breastfeeding or pumping), rest assured that this not a cause for alarm.

Pregnant people leak colostrum, the type of breast milk produced during the second trimester of pregnancy, Kincer tells Romper. This occurs as the breasts go through different developmental stages in preparation for breastfeeding. “If colostrum leaks or is expressed during pregnancy, don’t worry — your body will continue to make more for your baby once they’re born. You cannot ‘use up’ the colostrum in your breasts, leaving nothing for your baby,” Kincer says. Colostrum can leak overnight (which is more common), but can sometimes leak during the day as well. And, of course, it can leak during orgasm.

The amount you leak during orgasm won't be as much as you would leak if you were breastfeeding (you have that to look forward to!). It’s only a few drops at a time, because your body doesn't produce as much colostrum as it does milk.

There are a few reasons why you might be concerned about leakage from your breasts, during orgasm or otherwise. If you are leaking a significant amount of colostrum while pregnant, you'll want to check with your doctor. Likewise, “if you’re not lactating or pregnant and experience leaking [from] only one breast, it’s a good idea to see your doctor to rule out any potential issues,” Kincer says. “If you see blood, that is also not normal to see, even if you’re lactating.” Again, it's important to check with your doctor if you believe you're lactating when you shouldn't be.

To recap, yes, your boobs might leak when you orgasm, and yes, that’s totally common. And while you can take the aforementioned steps to prevent this (as much as possible), Kincer offers another option: “You can enjoy it and see it as just another messy part of sex!”

More Like This
11 Signs You're Sexually Attracted To Someone, But Not In Love With Them
Are Movie Theaters Too Loud For Pregnant People? OB-GYNs Explain
43 Instagram Captions For National Brother’s Day That Say It All
Say What's In Your Heart With These Stepmother's Day Quotes

This article was originally published on March 6, 2018