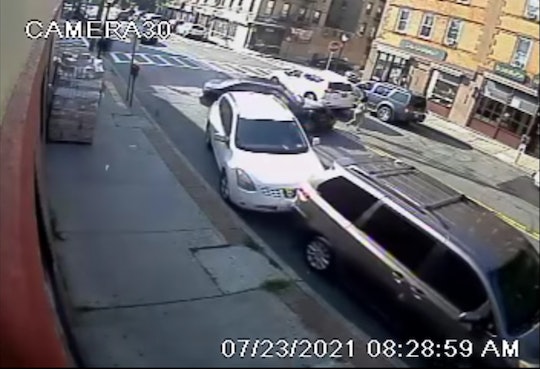 The infant suffered a skull fracture and burns but is expected to survive, police said.

Bystanders and police in Yonkers, New York, pulled off a dramatic rescue Friday when they lifted a vehicle off an 8-month-old who had become trapped following a severe car crash. According to police, the infant’s mother was crossing a street with the child in her arms when a driver turned left onto the street, striking first the curb and a parked car before veering into the pedestrians and plowing into the storefront of a nearby barbershop.

Yonkers Police Officers Rocco Fusco and Paul Samoyedy were grabbing breakfast at a bagel shop at around 8:30 a.m. on Friday when they heard a collision nearby and went to investigate, the Yonkers Police Department said in a press release. Once on the scene, the two officers discovered a 36-year-old female had been struck by a car that had then crashed through the storefront of a nearby barbershop. But the officers quickly realized the situation was a little direr than it had initially appeared as an infant was injured and trapped under the car.

“Mom was in a little bit of a state of shock, understandably,” Fusco said while recounting the incident to CNN. “She came to right away and she pointed under the car and told me the baby was under the car.”

Unable to back the car up off the child, footage from Fusco and Samoyedy’s body cameras showed police and multiple bystanders worked together to lift a 2005 Hyundai Elantra off the 8-month-old girl. “We’ve got a baby under the vehicle,” Samoyedy can be heard telling 911 dispatch operators in the video.

“Let’s lift it up,” someone yells in the background before police and bystanders gather around the vehicle’s front bumper to lift the car. Within seconds, Samoyedy freed the child, who can be heard crying in the video, from the wreckage and carried her away.

“I was just glad we were able to react,” Samoyedy told CNN. “As a father of four kids, it really intensified the situation for me when I saw the baby under there and the arms moving and not able to move any direction away from the car.”

According to the Yonkers Police Department, Samoyedy and Fusco provided medical aid to both the child and her mother until the pair could be transported to a nearby hospital. “The mother sustained a serious femur fracture and the infant sustained a skull fracture along with third-degree burns to her back and foot,” a press release from the police department noted. “Both the mother and the infant were transported to a local trauma center where they are still being treated but are expected to survive their injuries.”

The driver of the vehicle was charged with driving while intoxicated, aggravated unlicensed operation, and second-degree vehicular assault.