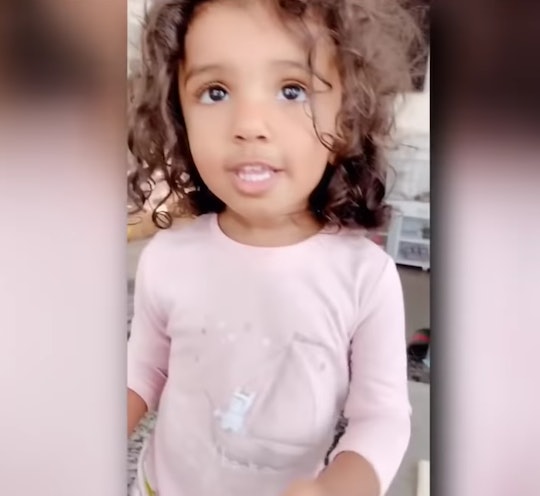 This Toddler Is Probably Smarter Than You

A California toddler has earned a coveted spot in the world’s oldest high IQ society at just 2 years old. Kashe Quest was accepted into American Mensa after tests concluded she has an IQ of 146 — nearly 50 points higher than the average IQ in America. According to American Mensa, Quest is currently the society’s only 2-year-old member.

“When it comes to our members, age is a fluid thing, so it’s often hard to pinpoint ‘youngest’ or ‘oldest,’” a spokesperson for American Mensa tells Romper. “It’s accurate, however, to say that Kashe was the youngest person in Mensa at the time she joined.”

Quest’s mother told Fox11 the family had begun to take note of the young girl’s intelligence shortly after her first birthday, noting the child had an impressive memory and a keen interest in learning. At around 17 or 18 months, Quest could already recognize the entire alphabet, number, colors, and shapes, her mother told the news outlet.

Now, Quest can count to 100, and identify all 50 states by their shape and geographic location as well as elements on the periodic table. The 2-year-old is also learning to read, speak Spanish, and how to communicate in sign language.

While Quest has a genius-level IQ, she’s still a toddler and her parents are keen to see her enjoy a childhood. “At the end of the day, she is also 2 and so she’s in that toddler stage,” Sukhjit Athwal, Quest’s mother, told Fox11. “So she very much is still a normal 2-year-old where we have negotiations, we have tantrums.”

“I think one of the biggest things with me and her dad are making sure she has a childhood and we don't force anything on her,” Athwal continued. “We're kind of going at her pace and we want to just make sure that she is youthful for as long as she can be.”

Of the roughly 50,000 current American Mensa members, just 62 are age 5 and younger. In order to become a member of American Mensa, individuals must have an IQ within the top 2% of the population. Young Mensa members like Quest are provided with special programs and services tailored to suit their advanced needs.