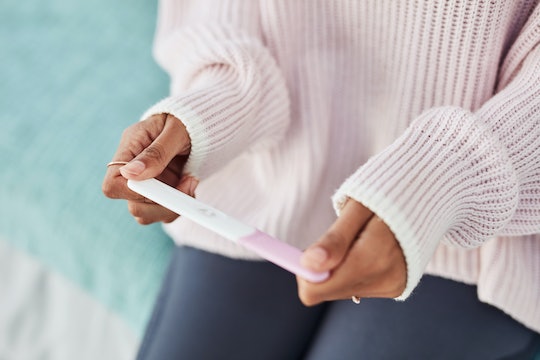 You May *Think* You Can Feel Yourself Get Pregnant, But Here's What's Happening

Every time I had sex while trying to conceive, I was beside myself wondering if that was it. Did it just happen? I always thought I'd just "know" when I was pregnant, whether through intuition or some kind of physical feeling when the deed actually worked, but can you feel yourself get pregnant? I mean, other than just feeling yourself having sex, because you're past that. But surely fertilization gives you some kind of zing, right?

"Early signs of pregnancy include mild cramping, breast tenderness, and nausea. Actual implantation is not usually felt," Dr. Jeanne S. Sheffield, division director of the maternal-fetal medicine department at Johns Hopkins tells Romper. It's a simple answer, but fertilization is actually a really complex process. The University of New South Wales Embryology department noted that the time between sex and pregnancy is actually around seven to 10 days in total. Turns out, sperm can live inside your body for up to five days before it connects with the egg. Once it does that, it goes into a process wherein it moves from the fallopian tube to the uterus. Then, your body starts producing human chorionic gonadotropin (hCG), the pregnancy hormone, which causes the zygote to stick to the wall of the uterus and begin forming its placenta — this is implantation, and technically, you're not pregnant until this occurs — days after having sex or being inseminated.

Basically? You're probably not getting pregnant as soon as you have sex. In fact, it can take days before you're actually pregnant. So the chances of you "feeling" that zygote attach to your uterus is pretty slim. Dr. Kate Killoran, OB-GYN, answers with a resounding, "No. At least you cannot feel [yourself get pregnant at] the moment of conception. Women may have some bleeding at the time of implantation, but even that you would not feel," she tells Romper.

But while the American College of Obstetrics and Gynecology (ACOG) and Sheffield note that you may feel symptoms early in your pregnancy, they often mirror premenstrual syndrome and can be easily overlooked. Just be mindful of what you're feeling. "Most often there aren't any symptoms at the immediate moment of conception, but some women subjectively report they 'know' when they conceived. Symptoms such as vaginal bleeding or increased discharge after intercourse are not indicative of pregnancy," Dr. Danielle DonDiego tells Romper.

There are countless message boards filled with stories about how women simply "knew" they were pregnant. While this was not the case for me, it wasn't until I was about to go to an amusement park and decided to take a test that I realized I was pregnant with my son. I had no symptoms — until a week later when all hell broke loose.

A quick, unscientific survey of my friends who have been pregnant finds that nearly half of them said they could tell before taking a test that they were pregnant and that they could feel themselves getting pregnant. Many of my friends noted that they got better at predicting pregnancy with each subsequent pregnancy. Meaning, if they couldn't tell with number one, by baby number three, they had a pretty good idea.

If this is your first pregnancy, you probably won't be able to feel yourself getting pregnant, but, if it's number four, you might know the minute you finish having sex with your partner or shortly thereafter. You'll probably be practically psychic by number six. But all of that is just intuition. Physically, you probably won't feel much. (And if it's not your first pregnancy, you're probably too busy cleaning sticky children to notice.) I thought I might be pregnant the second time, but I still wasn't sure. Maybe you'll be better at pregnancy tarot reading than I was. Or, you could take a test.

More Like This
Yes, It’s Possible To Get Pregnant If You Have An IUD
My Fertility Journey Began In A Cold Doctor’s Office, But It Was Also Weirdly Romantic
Pelvic Pain During Pregnancy: What Causes It & How To Deal With It
40 Fantastical Boy Names That Start With “F”

This article was originally published on July 20, 2017