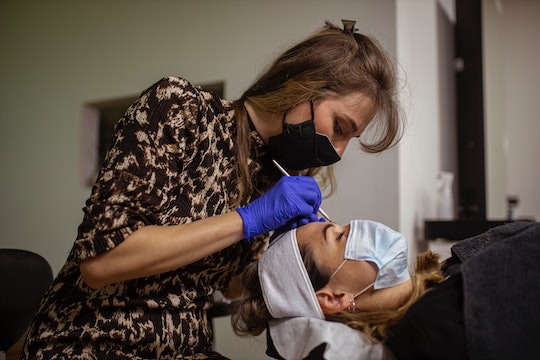 For many people, microblading their eyebrows produces a long-lasting, pigmented result that pencils, powders, and other cosmetics just can't touch. But can you get your eyebrows microbladed when you're breastfeeding? Here's what a variety of experts, from brow techs to physicians, have to say about the procedure.

"No, it is not recommended for someone who is breastfeeding to get their eyebrows microbladed because it is a form of a tattoo and it penetrates into the bloodstream," as Betsy Shuki, makeup artist and microblading expert tells Romper in an email. A professional brow technician is unlikely to perform the procedure on someone who is nursing anyway. "Pregnancy and breastfeeding are contraindications. You should be fully done breastfeeding before getting any tattoo," Christopher Drummond, Master Cosmetic Tattoo Artist at PFRANKMD, tells Romper.

Medical professionals also advise against getting the procedure at this time. "Given the many unknowns concerning the long term safety of tattoo inks, the safest course of action is to avoid all tattooing, including cosmetic ones, while breastfeeding," Felice Gersh, M.D. OB/GYN and founder/director of the Integrative Medical Group, tells Romper. Dr. Gersh also notes that relatively little research has been conducted on the long-term safety of tattoo inks, so there isn't (for instance) a specific study on exactly how the pregnant or breastfeeding body reacts to microblading at this time.

What could go wrong?

So what exactly could go wrong if you get a tattooing procedure such as microblading done while breastfeeding? "This has never been studied, for obvious reasons. However, since the pigments can get into the bloodstream, then theoretically it could get into breast milk. Cobalt, chromium, nickel, carbon black and titanium dioxide can all be found in the lymphatic system and according to mice studies can get into the liver via the bloodstream," Dr. Kim Langdon, an OB/GYN with Medzino, tells Romper. The numbing agent used before the procedure may also be a concern, explains Drummond, who adds that microblading is generally a more serious procedure than a lot of people realize.

Advice for fans of the microblade

If you're eager to get microblading done once your baby is weaned, here's some advice from the pros. "It's important to do your research and not just look for someone cheap. It should be someone who has been licensed for at least 5 years, and is actively practicing," says Drummond. And if you're going to try eyebrow microblading for the first time, understand that the procedure can be somewhat involved. "What I wish more people understood about microblading is that it is a two step, sometimes three step, process," says Shuki. "Because it is semi-permanent, touch-ups are required every 6-18 months." It all depends on your skin type.

In the meantime, there are plenty of great drugstore eyebrow fillers (shoutout to Tattoo Studio Brow Pomade) you can use while the baby's still nursing. Although a microblading appointment will have to wait until you're done breastfeeding, you can still have brows that feel "done" while caring for your newborn.

Felice Gersh, M.D. OB/GYN and founder/director of the Integrative Medical Group of Irvine and the author of PCOS SOS Fertility Fast Track

This article was originally published on Sep. 2, 2017