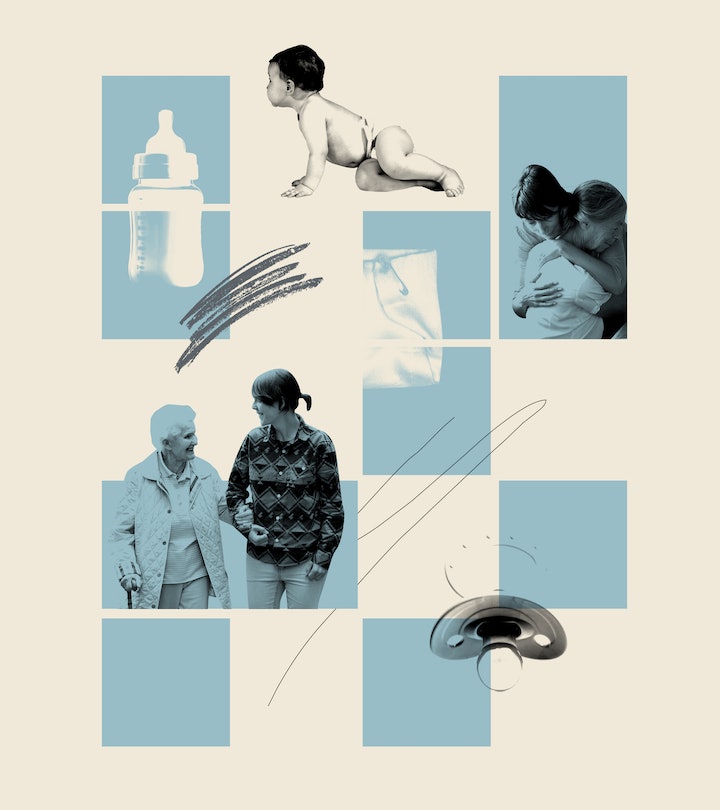 Caring For My Grandmother Eased My Fears About Having A Baby

Whether that longing ever comes or we just decide to go for it, I know I’ll be able to love them the way they deserve to be loved.

I should have known I was lying to myself about the reasons my husband and I weren’t having kids yet when I held my friends' babies and didn't feel jealous. I brought lasagna and flowers to meet their squishy newborns, still wrinkled and impossibly small. I marveled at the tiny miracles in my arms, smelled their scalps and rubbed my lips across their baby fuzz, all while being smugly proud of myself for being truly happy for them and not the least bit envious.

I should have known better than to think I’d all of a sudden become a bigger person.

It isn’t that we don’t want kids. We talk about them as not an “if” but a “when.” Ostensibly though, for a long time, the financials didn’t work out. We blamed the city we lived in, my student loans, and our commitments to our inveterately underpaying careers. But the truth is that I want things all the time, wildly impractical things with no thought toward sustainability or logic. When real life gets in the way of me getting them, I say things like, “Of course that doesn’t make sense right now,” and then scowl and bring it up again after a second drink.

I assumed that buried under all my practical reasons was some deeper desire to have a child, and that when all the obstacles were finally cleared, I would uncover a maternal drive. I assumed “eventually” would turn into now.

But, now in our thirties, with a codependent dog, too many plants, and a robust health insurance plan, our life has proven that false. We’re in a happy, stable marriage. People have done more with less. But the simple truth is, when I ask myself, no bullshit, if I want kids, the answer has always come back a thin, “Probably, maybe, someday.” An answer without urgency or ache, without envy or desire.

I worried that if I had kids without feeling that all-consuming longing for them, I would resent being required to give up parts of myself. Or worse, that I wasn’t capable of the love that is the well of patience and selflessness that’s required to be a parent. Part of me understood this fear to be irrational. Plenty of people have babies that are unplanned or even unwanted and are wonderful mothers. But I know how anxious I get when my routine is disrupted, how easily I lose my temper when I haven’t slept well, and how obvious it is when I’m some place I don’t really want to be. I understood that parenthood catalyzed a change in people, but I was already familiar with my own worst tendencies, which felt fixed and immovable. I worried that, if I had a baby when I still felt lukewarm about motherhood, I would fail my family in essential ways.

And then, last fall, during unprecedented times, a mundane bad thing happened: my 97-year-old grandmother fell and broke her femur. I got tested and double masked and flew back and forth across the country for months to help take care of her.

She had surgery, but due to her age they only gave her the half-way fix. Less trauma, but less functionality. The doctor said we should not expect her to get out of bed again. Each day followed a similar pattern. In the morning, when she got her deepest sleep, I caught up on as much work as I could and ran errands, throwing with abandon in the cart anything with calcium and protein I thought she might eat. I put the groceries away, then woke her up, changed her, brushed her teeth, washed her face. Then, breakfast, pills, coffee, the news. Afternoons were medical visits, a lunch she didn’t want, another change, a nap, a dinner she didn’t want, a romcom starring one of her girls (Julia, Meg, or Sandra), sponge bath, brush teeth, wash face, pills, then a restless sleep for her and YouTube videos on my phone for me until about 4 a.m. when she finally settled.

Caring for her was difficult. Not physically — I was disconcerted by how easy it was to lift her — but because I was afraid I was going to hurt her. She was also a reluctant patient. She hated being bedridden, being told what to do, and being taken care of. It got easier in that I got better at it, but at the end of each day, I still wasn’t sure how we’d made it through.

Most mornings, I cried in the car at everything from the systems that fail caretakers and the elderly, to the individual people who were failing me in that moment. I was enraged and resentful both generally and specifically, but not once did I feel even a blip of those feelings toward my grandmother. That might sound obvious — of course the fact of her body is not her fault — but I expected the threads of obligation and feeling to be tangled in such a way that spillover would be inevitable.

But with her, I was endlessly patient, curious, and persistent. Every time I changed a bandage without her wincing or made her a meal she finished of her own volition, I felt a quiet thrill of accomplishment and an unshakable certainty that I was doing perhaps the only truly good thing I’d done in my life by caring for her well. That was all I wanted to do, and I was only angry or bitter when something got in the way of that.

Mostly, I learned a lot. I learned that pleading with someone to “eat something, anything, it doesn’t have to be vegetables, it can be ice cream, but please, you can’t lose anymore weight,” comes from a place of desperation, not frustration. I learned that I can get so little sleep that I’m not sure how I am still alive and mostly keep it together, or at least only cry when I’m alone. Most importantly, though, caring for my grandmother showed me that I am capable of that all-consuming, selfless love. I’d thought of that kind of love as a hidden reservoir accessible only by people who were better or kinder or purer of heart, but it’s not. Love is action and presence, being there and making someone’s life as good as you can. That’s it. I don’t need to change who I am in order to feel it or live it. I’m already that person. I just didn’t know it until someone needed me.

This realization has made me less afraid of my own ambivalence around having kids. Whether that longing ever comes or we just decide to go for it, I know that I will be able to love them the way they deserve to be loved. I will be able to figure out what they need and give it to them. I will say that I was happy to do it and mean it with my whole body. I’ve never been more sure of anything in my life.

It’s now been eight months since my grandmother’s fall. She’s vaccinated and can sit in a wheelchair comfortably, another tiny miracle. She calls me when she’s peeling potatoes on the back porch and tells me about the flowers blooming in the yard. I’m back in California ordering too many decorations for her birthday party in June. I already know I’ll be fixing her plate to make sure she gets at least a few bites of sandwich and not just cake, that she drinks enough water, and that she doesn’t need her sweater on or off. Truly, there’s no place I’d rather be.