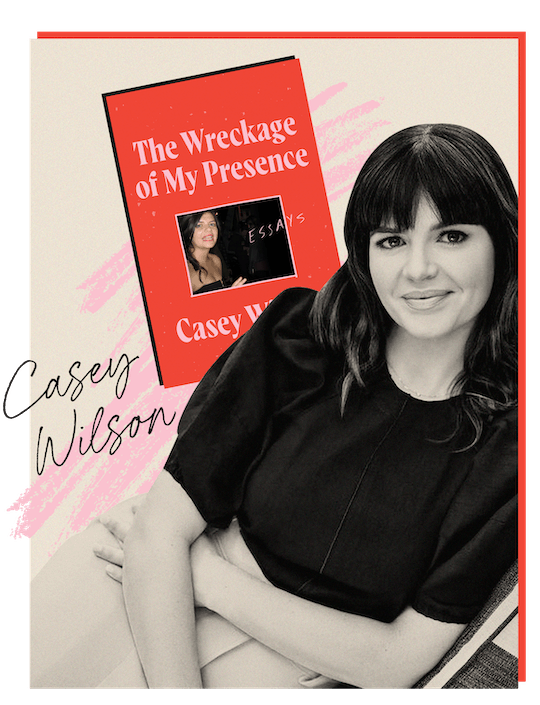 The Wreckage Of Casey Wilson’s Presence

Talking with the actress and comedian Casey Wilson about her Real Housewives podcast and her new book of essays, The Wreckage of My Presence

On the surface, Casey Wilson’s debut memoir, The Wreckage of My Presence, is an essay collection exploring relationships, familial bonds, and pop culture. To no one’s surprise, it’s hilarious and showcases Wilson’s master ability to self-deprecate as well as reflect. What is surprising is that right beneath the facade of LOL jokes is an examination of sustained grief and grieving. Wilson, who lost her mother unexpectedly at 25, gives the reader a front-row seat on the roller coaster that is loss, a subject matter that most of us go to great lengths to avoid. I had the opportunity to chat with Wilson about her essays and, of course, all things Bravo.

Samantha Mann: Congratulations on being People magazine’s “most beautiful” 40-year-old!

SM: We love to see it! And congratulations on the book. It’s really beautiful. It’s so funny. I was truly LOL-ing. But as much as it’s funny, at its core, this is an examination of grief and grieving, and really a love letter to your mom, Kathy. Was that your intention when you were writing this?

CW: Yeah, it was. I’m obviously revealing parts of her life that I hope are used in the spirit that I wrote them, so I have trepidation about that. But ultimately, my intention was a celebration and also presenting someone in the complexity which we all have and are.

SM: Americans are really terrible at grieving, and you allow the reader to sit with grief in a palatable way. I think people are going to really appreciate that.

The essay “What Dis” about your son’s health issues and his eventual diagnosis with Celiac — I imagine it was so difficult to write. I have a 2-year-old at home and I was hysterically crying reading it. I thought the essay did a great job hitting on the idea of intuition. Before your son had the seizure, you knew something was wrong with him and nobody was able to help you for so many years. It’s something a lot of women struggle with, believing their intuition and not thinking that they are crazy.

CW: It happens across so many different boards with women. And then I think women tend to — and not to generalize — but to internalize these problems and assume then that everything is our fault. And that feeling is being reinforced a lot. It was such a relief to find out what’s going on with my son and that he really did have a medical condition.

SM: I think that’s something a lot of us struggle with. But I think seeing that you were able to tap back into that intuition is really nice and just sort of own the realization I did know, and I was right.

SM: I love to talk to women about their relationships with food and their bodies, but it’s always a little sticky because I don’t want to get into diet talk or self-loathing. Where are you at with your relationship with food right now?

CW: Well, sugar and I will always have a complicated relationship. But maybe it’s that I turned 40, but I am so not interested in the conversation anymore, which I used to always initiate, like, “I’m disgusting,” and “What are you doing?” — i.e., What diet or fitness program are you on?

I feel like I toggle between the kind of body acceptance I would want a loved one to have and then where I’m actually at. They just don’t totally overlap, candidly, but I am like, Wow, life is so fucking short, especially after this year, to just to boil your life down to dieting. It just seems so self-loathing and so boring to me right now.

SM: In honor of your Real Housewives-themed podcast with Danielle Schneider, Bitch Sesh, I’d like to do a lightning round of mostly Bravo-related questions sent in by fans before you go. Jordan F. wants to know, what are some of your favorite scene partners that you’ve worked with?

CW: What a great question. I’ve worked with Catherine O’Hara twice, so I would definitely say her, and I’m working on a show with Will Ferrell. And I always love working with June Diane Raphael, my comedy partner for 20 years.

SM: Becky L. wants to know, which Housewife would you choose to be your real best friend, not a fake friend?

SM: Of course. No explanation needed. Are you following the Jen Shah of it all?

SM: When do you predict we will see the emancipation of Ashley Darby?

SM: Does Mr. Girardi have dementia? Are we sold on this?

CW: I’m not sold. There are too many weird things swirling around this. We’ve got answers for everything or answers we’ve never even had inklings of before.

SM: OK, lastly, if you could ask Andy Cohen for one wish, what would it be?

CW: To be an extra in one of the cities, maybe Atlanta would be great or New York, where I’m at one of the tables at a café, next to the women, and they’re screaming and throwing wine at each other. And I’m featured, you see me, but I’m not saying anything.

SM: I love that. That’s such a simple wish. I think you could make that happen. Thank you, Casey. The book is really great. I can’t wait for everybody to read it.