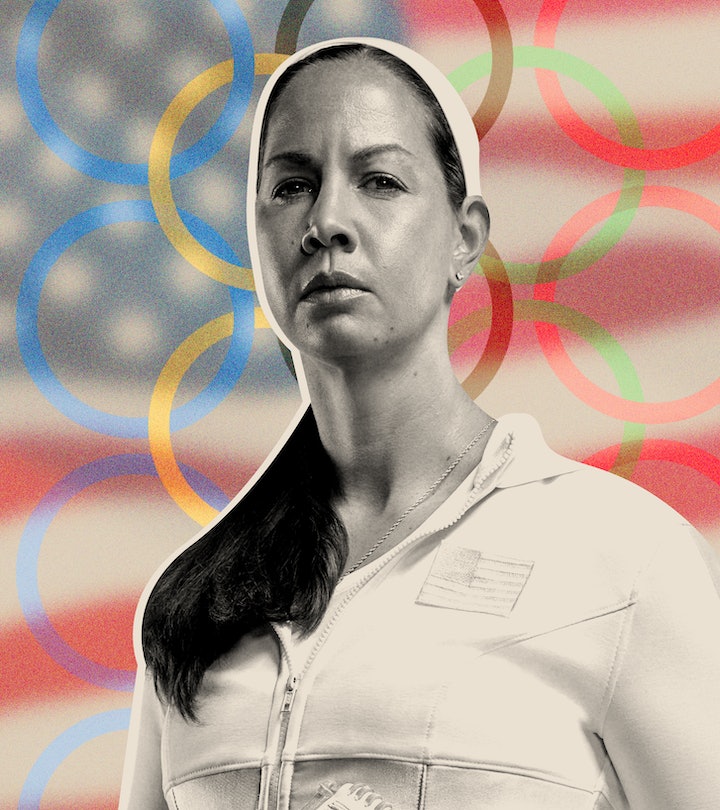 “I represent so much more than myself…”

Cat Osterman didn’t expect to be playing in another Olympics. In 2009, after the left-handed pitcher had helped her team bring home gold in 2004 and silver in 2008, softball was cut from the Summer Games — the first time a sport had been cut since 1936. In the intervening years, Osterman played eight seasons in the National Pro Fastpitch (NPF) League on the Rockford Thunder and USSSA Pride, winning championships in 2009, 2010, 2013, and 2014. In 2016, she married golf coach Joey Ashley and became a stepmother to her daughter, Bracken. (To Osterman’s joy, Bracken shares her stepmother’s love of Target-and-ice-cream runs.) That same year, the International Olympic Committee announced that softball would return to the games. Of course, Osterman, now a softball coach at Texas State University, couldn’t resist; she announced her “unretirement” — for the Tokyo Olympics only — in 2018.

Romper had a chance to talk to Osterman by phone to talk about her third Summer Games, raising her stepdaughter, and what being an Olympian mom really means...

Romper: What does a typical day look like for you?

Cat Osterman: We have my step daughter 50-50 every other week. And so, a typical day when she's with us is usually up about 6:30, making sure she's getting ready for school and dropping her off before 7:30. And then usually I come back home and I will get some type of workout in, whether it's cardio on the bike or running around the neighborhood or at the local soccer field. Then I'll have breakfast, which usually includes milk, which has fueled my training ever since I was young and first started playing sports – it gives me protein, which helps build lean muscle. And as I drink my smoothie, I organize my day with my planner. I do some reading, both my Bible and just some books that I've been reading, and then in the afternoon I go lift. And then a lot of times, depending on my husband's schedule, we either throw right at lunchtime when he's home or we'll throw in the evening. He catches me, which has made pitching training a lot easier.

That is very convenient.

CO: Being able to have someone who catches right in your same house means even at 7 o'clock at night, you can say, "Hey, let's go."

When did you first fall in love with softball? Because I think I read that you come from more of a basketball family.

CO: I do. My aunts, uncles, cousins, all of us play basketball. I started playing basketball in third grade. That was my first love. And then when I was in about fourth or fifth grade, I picked up softball for the second time. I'd actually tried and quit.

CO: I know. I enjoyed it a little bit more that time, but I really fell in love with it the second they let me pitch. Our coach asked who wanted to try, and I raised my hand. I had really no idea how good I was. I just know that I struck out one person and I fell in love. That was all I needed to say, “This is what I want to do for the rest of my life.” I tell people all the time I fell in love with pitching first. I do love this sport tremendously and everything it can offer. But in my head, I was a pitcher specifically from the second day we put the ball in my hand.

As an athlete, we always talk about how there are always eyes watching you, but when you're a mom or a stepmom, there really are eyes always watching you.

What is your favorite thing to do with your stepdaughter?

CO: I guess that varies. She has gotten into softball…

CO: Yeah, she's pitching herself in Little League, so it's always fun to watch her play and be able to practice with her. Aside from that, we love to go shopping, and we both love ice cream. So usually our shopping trips include a stop at an ice cream store somewhere. But we spend a good amount of time together, and usually if we're sitting at home bored, it's like, “Hey, let's go to Target.”

I love it. I read somewhere that when you were deciding whether to go to the Olympics again this year, she was excited to be able to watch you again. It must be nice to have your tiny, sweet little fan over there.

This is your first Olympics as a mom. Does that at all inform how you’re going into the game this time around?

CO: As an athlete, we always talk about how there are always eyes watching you, but when you're a mom or a stepmom, there really are eyes always watching you. It motivates you to be a good role model, a good example.

Does it work the other way, too? Does being an athlete influence your parenting style?

CO: I said that from the get-go when I unretired, I wanted to show [Bracken] that hard work pays off, that you can be successful at whatever it is you want to do if you work hard at it. I think I've been able to do that; she understands. There's days where I may need to pitch and it's already 5 o'clock and she'll be like, “OK, when are we going to the cages?” And I'm like, OK, here's my motivation. I really do need to get to the cages, even though I may want a day off or I think I can afford to take a day off.

What would you say if she wants to follow in your footsteps?

CO: “No matter what avenue you choose, if you want to be successful, it's going to take hard work, dedication, and commitment.” That's pretty much my running theme with her is whatever you're going to do, do it to its fullest potential. She's starting to understand that and there's days where she goes out and pitches and she's like, "I have to do it correctly." And I'm like, "You're right. You have to do it correctly."

What is something that you always carry with you?

CO: If I'm playing, I always have my No. 38 necklace on. It used to be a No. 8 necklace, and then I changed my uniform number going into this Olympics, so now we added a three to it. And then I have a tiny, folded up American flag that I got from a former player. It's a flag that she kept in her bag when her dad was serving in the military. She gave it to me when I decided I was going to play again, just reminding me that I represent so much more than just myself and my family. That's always in my bag. Between my necklace and that flag, I feel like I'm covered in reminding myself of where I've come from and who all is behind me.

This interview has been condensed and lightly edited for clarity.