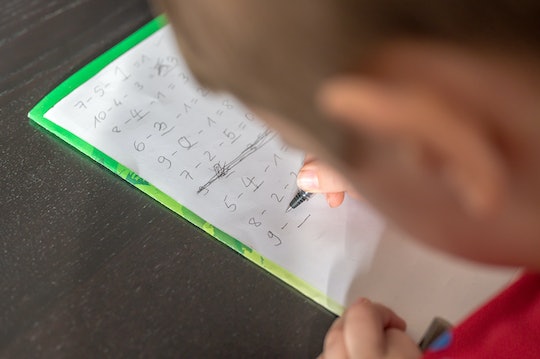 A Child Called 911 To Get Help With Their Math Homework

“You said if I need help to call somebody.”

A child struggling to solve a math problem called the people they’d been taught were always there to help: the police. Audio of the child’s 911 call was shared on TikTok by @911_stories_ and may serve as a reminder to parents to be a little extra thorough in how they explain when little ones should dial those three numbers.

The child’s call to 911 begins like most 911 calls do — with the dispatcher identifying themselves as 911 and asking what the caller’s emergency is.

“I need some help,” the child responded.

“What’s the matter?” the dispatcher asked.

Luckily for this child, the dispatcher seemed more than willing to offer a bit of homework help. “Oh you gotta do the takeaways?” the dispatcher said. “OK. Tell me what the math is.”

“And how much do you think that is?” the dispatcher asked.

But before the pair can work out the correct answer, a caretaker (perhaps the child’s mother?) confronts the child about being on the phone: “Joni, what are you doing?

“The policeman’s helping me with my math,” the child responded.

“What did I tell you about playing on the phone?” their caretaker asked.

“You said if I need help to call somebody!” the child said, passionately defending themselves.

“I didn’t mean the police!” their caretaker said just as the call cuts off.

Although it’s unclear when or where this 911 call took place, this isn’t the first time a child has sought homework help from 911. In January 2019, a dispatcher in Lafayette, Indiana, took a call from a boy who just needed to tell someone that he’d “had a really bad day” at school. “I just have tons of homework,” the boy said. “[It’s] math and it’s so hard.”

“Is there a problem you want me to help you with,” the dispatcher, who was identified by the Lafayette Police Department as Antonia Bundy in a tweet sharing audio of the call, asked. Bundy then coaches the boy through a fraction addition problem and checks to make sure that’s the only problem he’s having trouble with before hanging up.

In 2018, NBC 4 reported a child in Fort Collins, Colorado, called 911 seeking help with their division homework. “Hi, this isn’t an emergency, but I’m 10 years old and I’m working on my math homework right now and I can’t figure out what 71 divided by 3,052 is,” the news outlet reported the child asked.

While Fort Collins Police used the call as a chance to remind people that 911 should only be contacted for emergency situations, that dispatcher also took a moment to help the 10-year-old work out the answer.

Of course, police don’t recommend children call 911 for anything other than true emergencies. Kids Health recommends that along with teaching children how to call 911, parents should coach kids on what qualifies as an emergency situation where a call to 911 is warranted.

More Like This
Florida Teachers With “Unvetted” Classroom Books Could Face Felony Charges
6-Year-Old Boy Has Zero Regrets After Ordering $1,000 Worth Of Food On Grubhub
Reddit Backs Mom Who Got Scolded By Teacher For Not Inviting 30 Kids To Birthday Party
Eagles Coach Nick Sirianni Brought His Kids To A Press Conference & It Was Hilarious
What Parents Are Talking About — Delivered Straight To Your Inbox