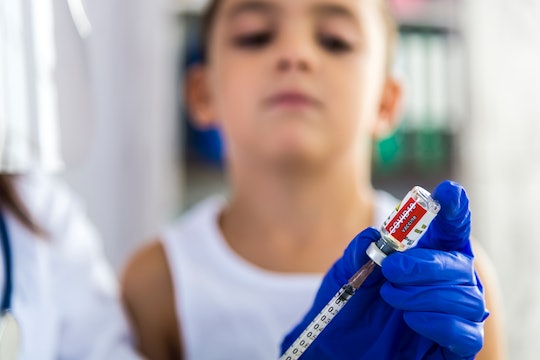 Experts warn there could be dangerous consequences

Millions of children in the United States are reported to have missed routine vaccinations that would have protected them against highly-contagious diseases like measles, whooping cough, and polio, according to new data from the Blue Cross Blue Shield Association. Childhood vaccinations during the COVID-19 pandemic fell by up to 26% compared to the previous year as families across the nation attempted to avoid hospitals and doctor's offices. But postponing and canceling immunizations could have serious consequences.

"The U.S. is on the precipice of a severe immunization crisis among children," Dr. Vincent Nelson, chief medical officer at Blue Cross and Blue Shield Association, said in a statement. "The COVID-19 pandemic has significantly interrupted adherence to vaccination schedules, and the possibility that preventable diseases, like polio, could become a threat to public health once again is particularly concerning."

Data released Wednesday by the Blue Cross Blue Shield Association showed that children in the United States were on track to miss an estimated 9 million vaccination doses this year. Specifically, Blue Cross Blue Shield found that between January and September doses of the Diphtheria, Tetanus, and Whooping Cough (DTaP) Vaccine and the Measles, Mumps, and Rubella (MMR) Vaccine had both fallen 26% compared to the same period in 2019. Meanwhile, doses of the Polio Vaccine fell by 16%.

After applying those decreases in vaccinations to the national population, the Blue Cross Blue Shield Association estimated that children in the United States could miss as many as 9 million DTaP, MMR, and Polio vaccines by the end of 2020. While those numbers aren't altogether surprising — reports that families were skipping vaccination appointments during the COVID-19 pandemic began surfacing in The New York Times in April — health experts have warned they could have serious consequences.

“These trends must be reversed,” Nelson said. “It is critical that parents and caretakers keep up with regular wellness visits and catch up on any previously missed vaccinations to keep children safe and ensure community protection against these highly contagious diseases."

In fact, the Blue Cross Blue Shield Association warned Wednesday that if those downward vaccination trends weren't reversed, the United States "would fall dangerously below the vaccination levels for measles and whooping cough that the CDC says are needed to protect community health." Meaning communities across the country could find themselves grappling with more than just the novel coronavirus.

Earlier this week, a joint report from the World Health Organization and the U.S. Centers for Disease Control (CDC) showed that although measles is entirely preventable, stalling global vaccination rates had resulted in 207,500 measle deaths in 2019 — a number 50% higher than the historic global low seen in 2016.

On Wednesday, the Blue Cross Blue Shield Association urged parents and guardians to reconsider efforts to delay their children's routine medical care. "Family physicians, pediatricians, and community health centers are well prepared and are taking measures to ensure their offices are safe," Nelson said. "We urge parents to ensure all childhood vaccinations are up to date.”

More Like This
Parents Are Missing Work At Record-Breaking Rates To Take Care Of Sick Kids
Pelvic Pain During Pregnancy: What Causes It & How To Deal With It
Is It Good For Babies To Be Exposed To Germs? It’s Complicated
Meghan Markle Went Hunting For Infant Formula For A Family During The Shortage