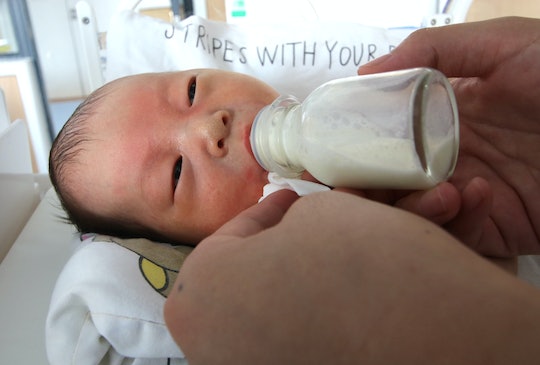 But many Chinese couples aren’t keen on having more kids as the cost of raising just one child is already sky high.

In an effort to combat declining birthrates and stave off an impending demographic crisis, China has ended its two-child policy. The country’s ruling Communist Party announced Monday that married couples would now be allowed to have three children. But many parents have balked at the idea, pointing to the high cost of raising a child, the country’s current child care shortage, and the rampant discrimination against pregnant people in the workplace as just some of the barriers families face.

But replacing the country’s two-child policy with one that allows married couples to have three children may not be an effective strategy for solving China’s looming demographic crisis given the high cost of living and raising a child. In fact, public reactions to the new three-child policy tended to be lackluster on the Chinese social media site Weibo. "It's mainly because I feel tired," CNN reported one Weibo user wrote. "How can I afford having a child when the pressure in life is so high?"

A Weibo poll conducted by the state-run Xinhua News Agency was reportedly deleted after 90% of more than 30,000 respondents said they were “absolutely not considering” having more children in light of the new policy, CNN reported.

For many in China, the new policy has done little to alleviate concerns about the economic challenges that come along with having children. “It’s too much of a burden to raise a child — let alone more than one,” Wang Zhenyu, a 33-year-old married and childless researcher in Zhuhai, told The Guardian. “If the government is really serious about encouraging more babies, they should improve things such as welfare, child care and eradicating discrimination against women in workplace. On top of that, educational resources is another big issue. They will all be factored into Chinese couples’ decisions.”

A growing desire among women to pursue careers in a work culture that has historically been unfriendly to working mothers is also likely to have stalled birthrates in China. A recent report from Human Rights Watch detailed numerous examples of pregnancy-related discriminations women in China have faced under the country’s two-child policy. Along with asking female candidates about their baby-making plans and imposing tough working conditions on pregnant employees in hopes they quit, the report revealed many companies expressed a clear preference for hiring male candidates or female candidates who’d already had two children. One woman was asked to sign a contract promising she would not have children for at least three years as a condition of employment, according to the report.

Although detailed proposals have yet to be released, China’s ruling Communist Party has said it wants to address some of the concerns would-be-parents have raised. In announcing the new three-child policy, Reuters reported the party vowed to enact “supportive measures” such as lowering educational costs, establishing tax and housing support for families, and strengthening pregnancy protections for working people.

It remains to be seen, however, if such promises will be enough to entice married couples in China into having more children.