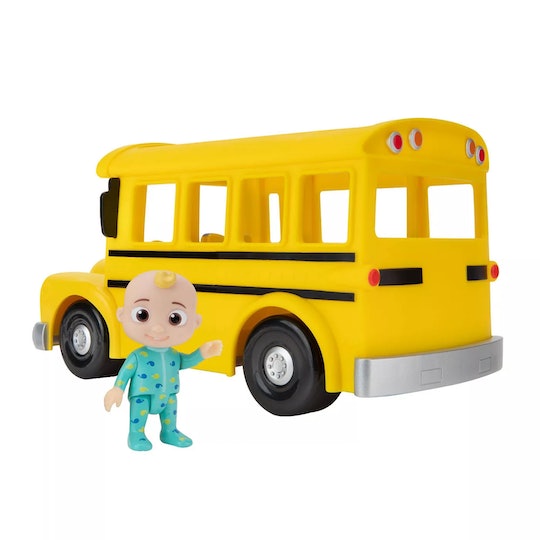 The CoComelon Toys Are Flying Off The Shelf

And Facebook marketplace and eBay are some parents' only options to find a singing JJ doll.

If you have a young child, you're likely one of the almost 100 million subscribers to the CoComelon YouTube channel, or routinely have your Netflix set to the series. The animated show about JJ, his family, and his nursery school friends has taken the internet by storm with its sweet music and short episodes. It's no surprise that CoComelon Toys are selling out everywhere this holiday season, and parents want to know if they'll be able to snag one of the absurdly popular toys before Christmas.

From Facebook mom groups to eBay, parents everywhere are trying to snag a few of the items, especially the CoComelon plush, which is the number one most-Googled toy for kids this holiday season, according to the search engine. Romper reached out to Jazwares, the maker of the line of toys to find out what's happening on the production end. Their representative tells Romper, "We are doing our best to restock the CoComelon toy line as quickly as possible, but due to the popularity and high demand, product is flying off the shelves." But no real information on when or if we'll be seeing more product in stores within the next couple of weeks. In-stock alerts might be your BFF on this one if your kid just has to have it. (Click "notify me when it's in stock," if the option is available on a retailer's website.)

You can also find aftermarket and second-party sellers on Amazon and eBay selling the popular toys for highly-inflated rates. The original price of the musical school bus was listed at $19.99, but it's going for $40 on eBay, and the musical JJ Bedtime Doll is going for $55! The simple plush toy version of JJ is in stock at Amazon as of the time I am writing this, but it might not last very long. The medical checkup kit was originally listed at $19.99, but second-party sellers are selling it for $45. The mini cars are only $5, and they seem to come in stock more frequently. Romper reached out to Walmart to find out when additional stock is expected, but there was no response at the time of publication.

If I was purchasing one of these toys, I'd go to Google, type "Cocomelon Musical Bus" set the price to under a specific dollar amount, and set up notifications for when it's available and in stock. This is how I managed to secure my daughter a Hatchimal in 2017. It really does work.

Obviously the lack of stock will come as a disappointment to many parents with children who are utterly obsessed with CoComelon. This was the first foray into the toy market for the extremely popular YouTube cartoon, and I think they were overwhelmed by the demand. This type of toy debut is different from one that has the backing of a huge network like Nickelodeon or Disney Jr. where they can tap into their own product divisions and licensing partners. An independent YouTube channel show is forced to use a different supply chain, and things get tricky. How will 100 million subscribers of a channel on YouTube translate to purchasing power at major retailers? Obviously now we know.

This all reminds me of the beginning of the "Baby Shark" excitement, when stores couldn't keep merch on the shelves. The difference being that "Baby Shark" was a part of the cultural zeitgeist thanks to its catchy anthem, whereas CoComelon is primarily known only to viewers of the show, or followers of YouTube subscription trends. Keep checking Target and Amazon and you might get lucky. But honestly, this is like the PS5 for toddlers, so you might not want to get your hopes up too high.