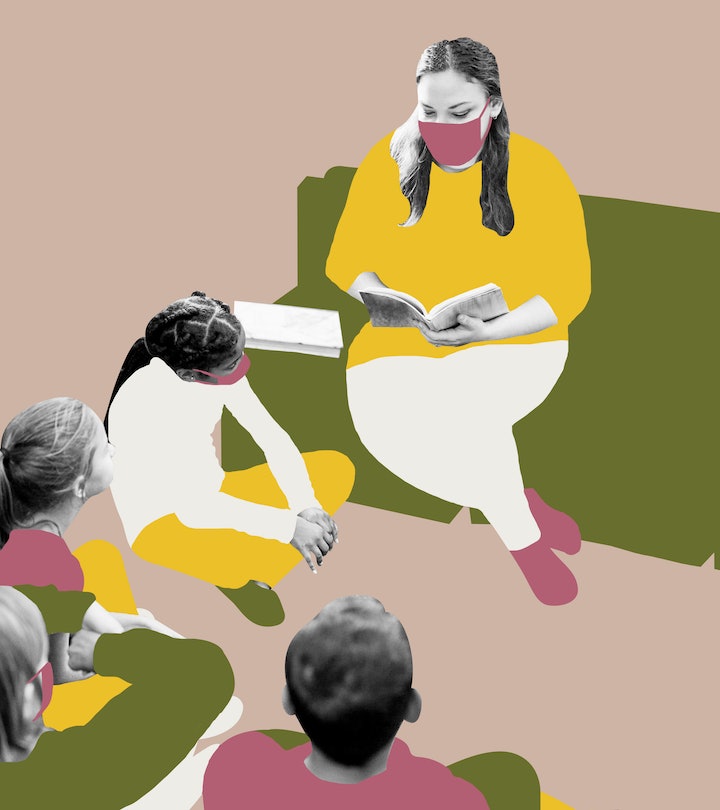 I’m Your Local Pandemic Children’s Librarian — How Can I Help?

I’m a children’s librarian and I have a secret I’m not supposed to tell anyone: I’m sick of story time. Or, I was, then COVID set in.

Don’t get me wrong, the babies and toddlers are cute. But you do get tired of doing the same thing over and over again. You get tired of worrying that no one will show for your program and then tired of wondering when they’ll leave. You get tired of washing the baby toys, the Sisyphean task of cleaning up the tornadic mess of the children’s area. I almost sound like a parent, except I don’t have any children of my own.

When our branch closed to the public in March 2020, I’ll admit it: I was excited. Gleeful, even. To have three weeks paid vacation, no strings attached? Public servants don’t get that kind of time off.

Had Ellis uttered her first words yet? Was Leo walking? I realized I missed them. I missed story time.

But when three weeks turned into three more weeks and three more weeks after that, library-wide panic set in. The staff who served low-income adult populations worried over how to get computer access to those who needed to file for unemployment; the teen staff worried over how the kids were handling the move to virtual school; the children’s staff worried about the disruption in young children’s routines.

When we closed the library, we shut down so quickly we barely had time to put a sign on the door for those who couldn’t call or look up online what had happened. What was originally supposed to be only two weeks of paid emergency leave was now ballooning into a full-blown fiscal dilemma with the L-word (layoffs) at the center. Staff were instructed to check their email daily. Other than that, there was no direction. Library leadership was scrambling.

When I left, I left everything: my puppets, books, flannel boards. I didn’t have most of the parents’ contact information — what would have been the need? I saw them every single week. After weeks apart and wondering what was going in their homes. Had Ellis uttered her first words yet? Was Leo walking? I realized I missed them. I missed story time.

It did feel strange, to read a book to no one. But we children’s librarians end up doing a lot of strange stuff for our jobs; it felt more like coming home.

At the same time, Publishers started loosening their copyright and fair use guidelines in order to allow teachers to stream readings of books. My library branch had a fledgling Facebook page, so one Wednesday night, I donned my jammies, grabbed a picture book, hit the Live button, and streamed the library’s first virtual story time of the pandemic.

I read Llama, Llama, Red Pajama by the late, great Anna Dewdney, one of my all-time bedtime favorites, and one I knew was their favorite, too. (I wasn’t wrong; a parent sent me a picture of her child watching the video wearing her own llama jammies.) It did feel strange, to read a book to no one. But we children’s librarians end up doing a lot of strange stuff for our jobs; it felt more like coming home.

Admittedly, the early videos got very little views. Few people followed the library’s Facebook page. If I wanted to have any chance of actually reaching my community, I knew I needed to reach wider. Librarians typically draw a strict line between patrons and friends. Working for city governments comes with restrictions not found elsewhere; depending on city policy, employees may be limited in what they can post online, what they can do politically, and how they handle themselves publicly. It’s best just to keep all social media private or at least refrain from adding patrons as friends. And you certainly should not use your personal page to post as a representative of the library — ever.

But I knew I needed to leverage my personal social media platform and share the videos to our neighborhood Facebook group, a group of 65,000 followers notorious for sarcastic and caustic responses to any and all posts. I knew that if I posted, and thereby “outed” myself as the local librarian on this community page, there would be no turning back. I would be opening myself up to personal and professional liability — not to mention the fact that all the weirdos (and there are plenty) would now know how to find me online. But this was an emergency.

The lines between the personal and the professional were permanently blurred. But it’s that way for all of us now, isn’t it?

Reader, nobody wants to mess with a children’s librarian.

Every Saturday, I read a picture book live on our library’s Facebook page and shared it to the community Facebook group. I chose each book as if I was selecting a specific salve to treat a wound. Not Quite Snow White by Ashley Franklin, Jabari Jumps by Gaia Cornwall, and Parker Looks Up by Parker Curry during the protests following George Floyd’s murder; Red by Michael Hall and Jack, Not Jackie by Erica Silverman when trans children were under attack during Pride month. Todd Parr for the weeks when it seemed that everyone needed a big band-aid. And following each reading, a check-in for the parents, a reminder for strength and self-care.

The nobility myth of librarianship (and other service professions) makes it too easy to forget that even if we do this job because we’re called to it, we still deserve to be compensated and respected.

With each post, more and more messages poured into my inbox: parents from story time who missed me, people who had questions about the library, families who needed book recommendations for those difficult conversations — death, unimaginable grief.

The lines between the personal and the professional were permanently blurred. But it’s that way for all of us now, isn’t it? Teachers text their students on personal phones. We hold meetings in the bedrooms of our homes. Have a question for your public librarian? Message her on Facebook.

I’m tired of the superhero librarian myth — the librarian who lives to read for children, who will move heaven and earth to get the right book in the right kid’s hand at the exact right time. The mythical librarian who doesn’t mind the low pay because the work is just so noble. That’s not entirely me. That’s not entirely any of us. The nobility myth of librarianship (and other service professions) makes it too easy to forget that even if we do this job because we’re called to it, we still deserve to be compensated and respected. At the end of the day, clocking in as a librarian is still clocking in to a job. We’re real people who want to do right, get paid fairly, and work a job we love without the job working us. A tall order for anyone trying to be human in this pandemic, but something to reach for.