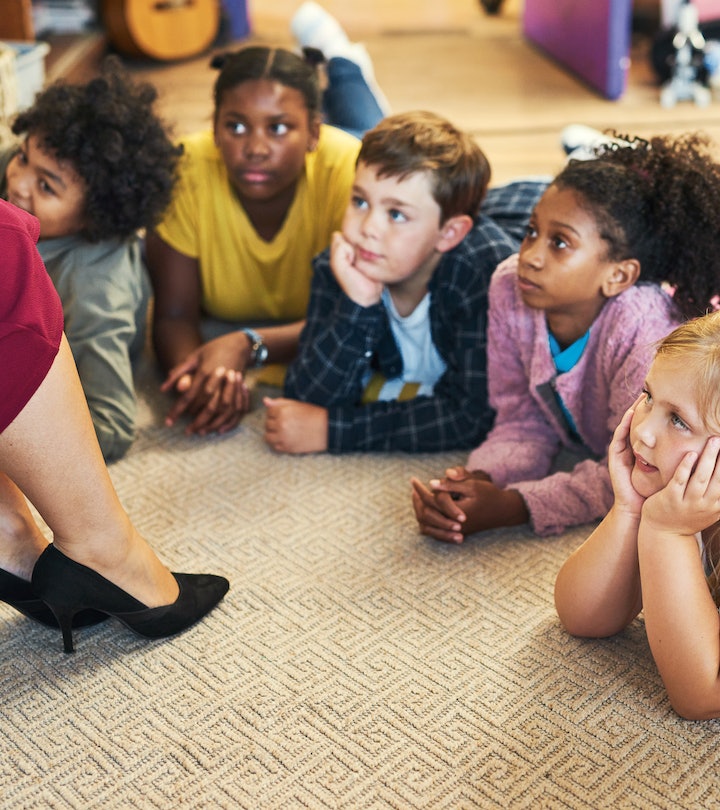 Historically, the resistance to integration was led by white women who looked just like me. So I do all I can to combat segregation in my own community.

When my first daughter, Maya, was born, I used to wedge her into that little taco newborn insert, put her in the Baby Ergo, and walk around our gentrifying neighborhood in Oakland listening to podcasts and trying to reconstitute a self. Who was I now that she was born?

On these endless walks, I would always circle back home by our local, neighborhood school, noticing the towering Redwoods and the boisterous sounds of kids inside. They seemed really carefree, unlike me. They also seemed mostly Black and Brown, unlike me. Where are all the white kids that I had seen traipsing around the neighborhood, I wondered?

It was a question that launched me on a journey of a thousand moral miles.

I learned that the vast majority of white families in our very progressive neighborhood did whatever they could to avoid the majority-Black, majority-low income local school, a dreaded rating of "1 out of 10" on GreatSchools.org. Why? At the time, Maya was about to turn 5, so I had a million conversations with people asking that very question. And they almost all wound back to one existential excuse:

Because everyone just wants what is best for their kids, right?

It’s a phrase that gets repeated so often among parents it feels like a truism, but I’m suspicious of anything, no matter how seductive, that lets me slip out of ethical angst.

On the one hand, parents are supposed to, are urged, to want and get the best for their kids, and on the other hand, we live in a society where our public institutions are eroding and, as a direct result, our commonly shared future is looking less and less bright.

In light of all that: how can we be both decent parents and decent citizens? Are the two really at odds?

When it comes to schools, the research screams that the answer is actually no.

According to UC Berkeley professor Rucker C. Johnson: “The medicine called integration works.” Black and Brown kids with the most exposure to integrated schools score higher on tests, earn more over a lifetime, and even live seven years longer than their peers in segregated schools. White kids, likewise, do fine compared to their peers in majority-white schools, and even have some additional social skills: they have more interracial relationships in the long-run.

In light of all that: how can we be both decent parents and decent citizens? Are the two really at odds? When it comes to schools, the research screams that the answer is actually no.

As journalist Nikole Hannah-Jones has often said, and I want to reiterate here, there is nothing magical about white kids. It’s just that when our kids show up, we show up with them, and we carry all of our privilege with us — namely our financial and social capital.

So that’s what I’ve been doing, dragging my financial and social capital, along with my kids (I’ve got two in school now!), to Emerson Elementary in Oakland’s Temescal neighborhood for the last four years. And writing a book about it: the recently released Learning in Public: Lessons for a Racially Divided America from My Daughter’s School.

We’re obscenely blessed by this “failing” school. I get to love on kids who don’t necessarily expect it of me or other adults. I get to laugh with a bunch of mothers, some of whom were born and raised in Oakland, some of whom just arrived from Afghanistan and Guatemala, all of whom share a love of and fierce irritation with our kids. The Black History Month showcase, which is like Christmas at our school, is one of the best hours of my whole year. And I get to see how my kids show up in this space, who they befriend, what they learn, what they process as normal.

But lest you wonder if this story is simple, think again. I am also plagued by doubts about whether this is actually the right choice, not for my daughter (who seems perfectly fine), but for the other kids. One teacher that I deeply admire who left the school told me that, in all honesty, she thinks the white kids there are a distraction. She worries that white teachers and parents have a tyranny of low expectations for kids of color and that she’d rather see them educated in explicitly Black schools with afrocentric pedagogy and Black leaders.

It’s been one thing for me to decide to enroll my kids at this school. It’s been another to show up and be aware of my own blindspots.

This year, the kindergarten looks unprecedentedly white. Am I the pied piper of gentrification? Will the new parents be thoughtful about how they wield their whiteness?

It’s been one thing for me to decide to enroll my kids at this school. It’s been another to show up and be aware of my own blindspots. I’m trying to do a lot of listening and a lot less talking. I’m trying to make friends, but not come on too strong. Turns out the phrase “playdate,” for example, is a pretty white thing. I’m trying to follow the lead of other parents, while also being sure not to withhold my own skills or access where it might benefit the school. Some days, it’s a mindfuck.

Lots of people think it’s naive to even attempt to influence white parents to make this choice voluntarily, that the only thing that will ever integrate schools is legal mandate.

You might be thinking, “Didn’t we do that? Brown v. Board? 1954?” Well, we did and then we didn’t. Most of the promise of Brown vs. Board was legally eroded by regional fights; in the south, the pushback was direct and often fought in the courts, in the north, integration was fought via the red herring of busing and other creative tactics. Whether apartheid education was fought for unapologetically, or defended by obsfucation, the outcomes were the same: a grand failure of the project of school integration. The most integrated year in U.S. school history was actually 1988, when I was my older daughter’s age.

So this multiracial democracy thing, this public institution thing, is hard. It’s supposed to be. No one said it would be easy. But is anything worth doing all that easy?

While writing my own book on all of this, I was heavily influenced by another book, historian Elizabeth Gillespie McRae's Mothers of Massive Resistance. In it, she argues that the erosion of Brown vs. Board was actually led not by judges who wore white hoods in their freetime, but by their wives who oversaw the bake sales and the rotary clubs — what she called the “constant gardeners” of segregation. She writes: “These women guaranteed that racial segregation seeped into the nooks and crannies of public life and private matters, of congressional campaigns and PTA meetings, of cotton policy and household economies, and of textbook debates and day care decisions.”

The resistance to integration was highly strategic and it was tragically effective. Our people managed to erode the potential beauty and courage of Brown vs. Board, and the contemporary opportunity gap lays bare the impact.

The resistance to integration was led by white women who looked just like me, who scared the shit out of each other by talking ad nauseum about all its fake dangers. It was highly strategic and it was tragically effective. Our people managed to erode the potential beauty and courage of Brown vs. Board, and the contemporary opportunity gap lays bare the impact.

Generation after generation of Black and Brown families in this country have been deeply disadvantaged by a system that doesn’t serve them. White families have been so advantaged, meanwhile, that it has often proven toxic. Think about all the helicopter parenting and the epidemic anxiety and the college cheating scandals —more evidence that this kind of inequity isn’t good for anyone

I send my kid to a school that freaks other white parents out and I just go about my business while they’re freaking out. It’s not heroic. It’s just my neighborhood school and my kids are doing great.

When I’m having coffee with white moms, I try to interrupt the constant narratives about how special and fragile our children are. I say things like, “Oh, my kid isn’t gifted.”

When people ask about what schools are “good” or “bad,” I refuse the binary and remind them that there are 81 schools in our district, all of them unique communities with strengths and challenges worth investigating by talking to people who are actually part of those communities, not looking up a reductive number.

I go to endless district meetings and school site council meetings and every time data is presented I make sure I understand how it breaks down by class and race and, if it’s not there, I ask.

I donate money. Til it hurts. Because I have it and other people don’t. I ask my friends for their money.

Speaking of friends, I try to stay in friendship with people I disagree with, because that’s my work, too. Sometimes they’re white and I’d rather act like I’m better than them and cut them off. But I don’t. I try to hear them out, but push them to see their racism, overt or covert. And sometimes they’re Black and they make me feel dumb or ashamed of myself for not getting it right, because I always want to get it so right, which I’ve learned to recognize as fragility. I push myself to stay in conversation.

Deceptively simple but maybe most important of all, I offer my support to parents of color and I ask them for their help when I need it.

Does the funding equation for public school need to be entirely overhauled? Yes. Do we need more teachers and principals of color so bad? Yup. Do we need to end discriminatory practices in housing and segregated healthcare and pass a guaranteed income and…? Yes. Yes. Yes.

And I will work on all of that stuff with other people, but if I neglect my own little garden, I miss the soul-clarifying part. I miss the nutrition in the soil because I’ve got my head in the clouds. Or as Rucker C. Johnson puts it: “Our ability to do everything should not undermine our efforts to do something in our relevant spheres of influence.”

I’ve got a little sphere going over there in Oakland. It’s modest, but it’s mine. The test scores still suck, and I put my foot in my mouth on the regular, but I’m living in real, imperfect community, as are my kids. We are part of this grand, unrealized experiment that is this country. And it doesn’t always feel comfortable, but the integrity is a sweet relief.