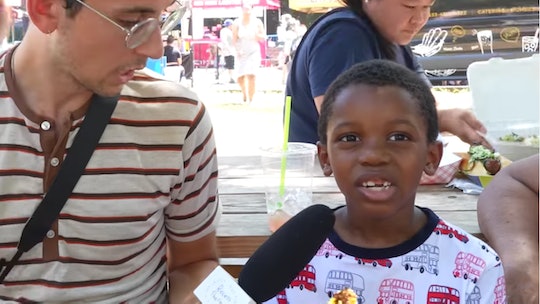 Everything You Need To Know About “Corn Kid”

The #CEOofCorn has become a viral sensation.

We can all probably agree that in this year of our Lord (Beyoncé) 2022, the internet can be a nightmarish hell-scape of radicalization, division, and despair. But every now and then, above the social media noise comes a voice so earnest that it reminds us that the internet is also a series of connected, creative communities. Most recently, that reminder has come in the form of Corn Kid aka #CornKid aka #TheCEOofCorn.

If none of this makes any sense to you, gather round. Here’s everything you need to know about “Corn Kid.”

Recess Therapy, which launched in 2021, features comedian and actor Julian Shapiro-Barnum interviewing anonymous children in New York City playgrounds. The discussions are the perfect blend of heartwarming and hilarious, striking the perfect balance between chaos and charm. (Which is probably why the series’ Instagram account boasts 2.2 million followers.)

In a recent interview, Shapiro-Barnum interviewed a precocious kid who waxed poetic about his very favorite vegetable (which he happened to be eating at the time): corn!

“Ever since I was told that corn was real, it tasted good,” he explains (no further word on whether or not he ever disbelieved corn was real), “but when I tried it with butter, everything changed!”

“Look at this thing!” he says at another point. “I can’t imagine a more beautiful thing!”

He even manages to establish an ‘80s sitcom style catchphrase — “I hope you guys have a corntastic day!” (Upon hearing the uproarious laughter of the adults around him, he asks incredulously “What?! It’s just a pun about corn!”)

The post on Instagram has garnered more than 1.2 million likes (to put that in perspective: Recess Therapy posts generally have between 50,000 and 200,000 likes).

Tariq has become known as the CEO of Corn.

A musical remix of his interview went viral on TikTok.

The little boy whose name (we subsequently learn) is Tariq surly went viral in his own right and inspired TikTok user @schmoyoho to remix his interview to music and it. is. a bop. Accompanying Tariq on the keyboard and vocal harmony, @schmoyoho otherwise only used audio from the interview... but made it musical. The result is a delightful earworm that captures the innocent enthusiasm of the original interview.

The ode to Corn Kid went even more viral than the original post, earning over 5.6 million likes in a week. “When does this hit Spotify,” one TikTok user jokes/maybe not completely joking in the comments.

“Not me buying corn at the store tonight solely because this song has been running through my head all day,” says another.

“If this isn’t the most viral sound in TikTok history within the month then I am going to be disappointed,” a third proclaims. “Purely wholesome, it’s fantastic… it’s… [corn emoji].”

TikTok being TikTok, thousands of people have now used the song for their own purposes, setting it to recipe tutorials, adorable animation, musical duets, and videos of feeding bears (no, really) to name just a few.

Tariq did a second interview with Shapiro-Barnum.

Following his viral moment, Tariq met back up with Shapiro-Barnum to re-visit the vital issue of (what else) corn. The importance of corn breaks, inventing a corn dance, and how to be a corn friend. Tariq also gave thoughtful advice on how adults can find joy (remember when they were children) and some fun facts about Komodo dragons (a callback to another viral Recess Therapy alum).

Tariq dispenses advice about corn and joy and through corn.

He also talked about his viral fame. “It’s just amazing to have everyone just support everyone, when there’s negative [sic] in the world,” he said.

Brands have been keen to partner with (or reference) Tariq (and corn)’s viral moment.

The internet being the internet, Tariq’s viral fame spread beyond his original interviews and TikTok. From Church’s Chicken to Chips Ahoy to the Orlando International Airport have included corn in some capacity or another to capitalize on the vegetable’s viral moment.

Chipotle invited Tariq to a location near his home to film a included a sponsored video for Instagram. In it, an unseen employee asks an unseen customer what they would like in their bowl, the camera passing over each item. The customer rejects each offering... until the employee asks if they would like corn. The camera pans up to Tariq who lights up and declares “It’s CORN!” Chipotle told PR Week that it was their highest performing post of all time.

The Hollywood Reporter notes that Tariq was seen at the premiere of Disney’s live-action Pinocchio, presumably at their invitation.

Tariq has become an ambassador... kind of.

“South Dakota is one of the top corn producers in the nation, providing nourishment to people across the globe but especially to Tariq, a 7-year-old boy who recently discovered that corn was real,” the document reads, going on to make a whole lot of corn puns and references to Tariq’s interview with Recess Therapy.

Tariq was invited to South Dakota’s “Corn Palace” by the state’s Department of Tourism and received a scholarship to learn about agritourism efforts across the state.

“Corn Kid” is available for Cameos.

Tariq has capitalized on his viral moment by joining Cameo, offering personalized videos as “Corn Kid” ranging from $145 to corporate videos $400. (Get paid, Tariq!) Judging from sample videos available on his page, the same enthusiasm and sweetness appears to be present in personalized videos as well, which makes sense: you can’t fake this kind of sweetness and enthusiasm... also, he’s clearly powered by corn aka lumpy, knoby gold!

This article was originally published on Aug. 26, 2022