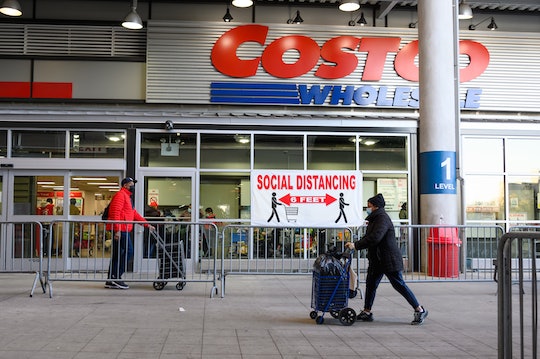 Why The Internet Is Freaking Out About Costco's Yule Log

It's the dessert we deserve after a year like this.

Great news for those of us who wait until the last minute to plan our holiday menus: dessert is covered. This year, Costco is selling Yule Log cakes for under $10. Honestly, you probably couldn't even get the ingredients to make your own cake for that price, to say nothing of saving you the time and effort. A Costco fan account on Instagram, @CostcoDeals (how am I not following that one, seriously?), posted the delightful confection on its stories and the internet promptly imploded.

For those of you whose family did not insist on having one of these beauties on the table every Christmas, the Yule Log – which is called a Bûche de Noël if you parler français – is a traditional holiday dessert, usually made from a genoise sponge (a cake variety I only know by name from watching The Great British Bake Off) and rolled with buttercream to form a Swiss roll before being covered in chocolate buttercream fashioned to look like an actual log.

The origins of the cake date back to the 1600s. The first recorded recipe, according to History.com, comes to us from a 1615 cookbook by Gervase Markham called The English Huswife. But long before there was a cake there was a literal log. Northern European pagans would choose a special tree, bring it into their house, and burn the trunk on the Solstice and the nights that followed. The ashes, considered to have magical and medicinal properties, would be saved to light the following year's log. The tradition persisted even as paganism waned, with families lighting the Yule log on Christmas Eve rather than the Solstice. Eventually, this turned into making a log-shaped cake. I'm no historian, but I'd like to suggest that this also marks history's first "cakes that look like other things" moment.

Look, I'll level with you here: I've never met a Costco product I didn't like. I'm a sucker for the store: it's one of the most basic things about me, but I lean into it because I love feeling like I'm getting deals on a box of crackers so large it needs a zoning permit. And when it comes to cakes in particular, Costco is nonpareil: I grew up looking forward to birthdays, graduations, and other celebratory milestones just to get a cake from Costco. So while the Yule Log cake likely doesn't have magical properties, it is almost certainly magically delicious.