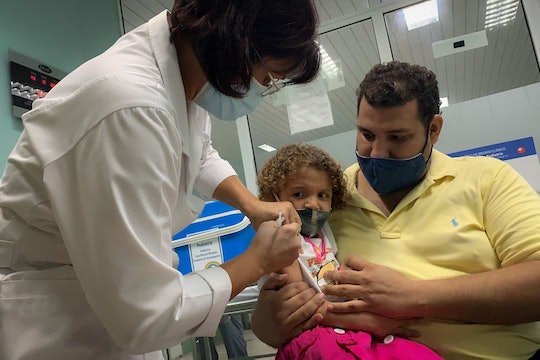 Cuba Has Started Vaccinating Children As Young As 2

Cuba has begun vaccinating children as young as 2 years old in an effort to better protect children before they head back to school.

With a quick prick in the arm, followed by another and another, Cuba has become the first country to begin vaccinating children as young as 2 years old. The island nation reportedly began administering a Covid-19 vaccine produced inside Cuba to toddlers and children on Monday in an effort to better protect kids before they head back to school. Cuba is believed to be the first country to begin vaccinating young children against Covid-19.

“With the rise in positive cases of Covid-19 in children, it’s necessary that the family protects itself more and so we are protecting our children and adolescents,” CNN reported Cuba’s chief epidemiologist Dr. Francisco Duran Garcia said.

All children over the age of 2 in Cuba will be given at least two doses of Cuba’s locally-developed Soberana-2 vaccine, Reuters reported, quoting Cuba’s state-run Cubadebate news outlet. While neither Soberana-2 nor Abdala, Cuba’s other locally-developed Covid-19 vaccine, have yet to be formally recognized by the World Health Organization (WHO), clinical trials have reportedly shown them to have an efficacy rate of more than 90%, according to The Guardian. The country is hoping to have more than 90% of its population fully vaccinated by December, Cubadebate reported.

Along with protecting kids’ health, Cuba is also hoping its campaign to vaccinate children against Covid-19 will enable them to return to in-person learning sooner rather than later. Children in Cuba have had little formal education since the pandemic shut down schools nationwide in March 2020 as private wifi in homes remains relatively uncommon despite being legalized in 2019. Instead, children across Cuba tuned into educational TV programming, Insider reported. Cuba’s government has said it hopes to gradually begin reopening schools in October and November once all children are vaccinated.

Although early efforts to mitigate the spread of Covid-19 were successful in Cuba, the country has recently seen a surge in cases and deaths driven largely by the Delta variant. Of Cuba’s 712,992 confirmed Covid-19 cases, more than a third occurred in the last month, according to data from Johns Hopkins University’s Coronavirus Resource Center.