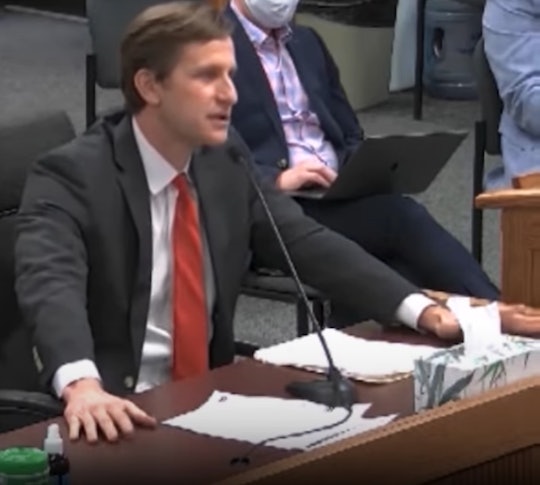 Brandon Boulware, a business lawyer in Missouri, made a passionate, moving speech in opposition to a bill that would ban his trans daughter from playing sports.

In a now viral video posted by the American Civil Liberties Union, a dad of a transgender daughter gave a moving testimony in opposition to new state legislation that would ban his daughter from playing on girls sports teams.

Brandon Boulware took a day away from his law practice to testify in opposition to House Joint Resolution (HJR) 53. Introduced by Republican Rep. Charles Bayse, the legislation specifically singles out trans girls, making it illegal for them to participate in girls sports. (Trans boys are permitted to participate in boys’ sports.) Girls like Boulware’s daughter, who plays on girls tennis, volleyball, and dance teams.

“One thing I often hear when transgender issues are discussed is ‘I don’t get it. I don’t understand,’” Boulware said. “I didn’t get it either. For years I didn’t get it.” He then described forbidding his daughter, in the past, from expressing her identity as a girl, forcing her to play with boy toys, wear boy clothes, and keep her hair short. The result? She was miserable.

“I had a child who did not smile,” Boulware continued. That changed on the day when his daughter, wearing one of her sister’s dress up costumes, asked if she could go play with some neighborhood kids.

When Boulware said no, she asked if she put on boy clothes could she go play. “And it was then that it hit me,” he said, “My daughter was equating being good with being someone else. I was teaching her to deny who she is. As a parent, the one thing we cannot do, the one thing, is to silence our child’s spirit.”

From that day forward, Boulward and his wife committed to supporting their daughter, and the change, he reports, was immediate. “I now have a confident, a smiling, a happy daughter.”

Numerous studies and surveys have found that trans adolescents have a higher risk for depression, anxiety, and suicidality. One study, published in the Journal of Adolescent Health showed that, when compared to their cisgender peers, trans teens were found to have an elevated risk of depression (50.6% vs. 20.6%), anxiety (26.7% vs. 10%), attempted suicide (17.2% vs. 6.1%), and self-harm (16.7% vs. 4.4%). But a study published in Pediatrics, the official journal of the American Academy of Pediatrics, concluded that “socially transitioned transgender children who are supported in their gender identity have developmentally normative levels of depression and only minimal elevations in anxiety, suggesting that psychopathology is not inevitable within this group.”

In other words: it’s how society treats trans people, not being trans in and of itself, that leads to such dire outcomes for our children.

In his defense for allowing trans girls to participate in girls sports in Scientific American, child psychiatry fellow Dr. Jack Turbin asserted that there is no scientific case for excluding them, despite cries from those who suggest that trans girls put cis girls at a disadvantage. “The vast majority of female athletes are cisgender,” Turbin writes, “as are the vast majority of winners. There is no epidemic of transgender girls dominating female sports.”

Unfortunately, lawmakers are not following research and expert opinions. With 82 bills introduced so far this year according to the Human Rights Campaign, 2021 is breaking records for anti-transgender legislation.

In closing, Boulward asked lawmakers to think of his daughter, and those like her, as they vote against HJR 53. “Let them have their childhoods,” he pleaded. “Let them be who they are.”