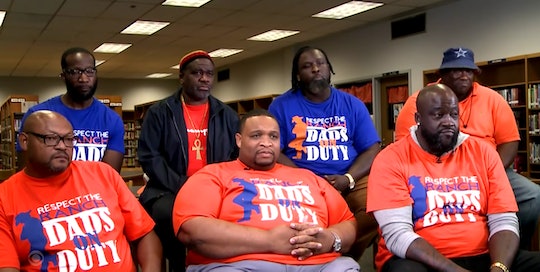 A series of violent fights that resulted in 23 students being arrested spurred these dads into action.

More than three dozen Louisiana dads have found a creative solution to addressing rising violence at their children’s school. When violent fights began erupting regularly at Southwood High School in Shreveport, Louisiana, resulting in 23 students being arrested over the course of just three days, the fathers formed Dads on Duty. The volunteer group of roughly 40 dads has taken turns greeting students each school day and monitoring hallways to cultivate a safe and positive environment on campus.

None of the roughly 40 dads who make up Dads on Duty have training or degrees in school counseling or criminal justice, according to CBS News. Instead, they cite their role as fathers as the qualifications for the job they’ve taken on. “We’re dads.” Dads on Duty founder Michael LaFitte told the news outlet. “We decided the best people who can take care of our kids are who? Are us.”

The dads hang out at Southwood High School in shifts, serving as volunteer safety monitors. They greet students as they arrive for the day and monitor common areas of campus as the school day progresses to prevent violent fights from breaking out. And so far, their presence is working. According to CBS News, Southwood High School hasn’t recorded a violent incident since Dads on Duty showed up.

In fact, Southwood High School Principal Kim Pendleton told KTBS the students have loved having the fathers around campus as many of the dads involved are students’ neighbors or people they see in church on Sundays.

“I immediately felt a form of safety,” one student told CBS News.

Although it’s not immediately clear why Dads on Duty have been so successful in quelling the violence at Southwood High School, some students told CBS dads can put an end to misbehavior with just a look. Others noted the Dads on Duty bring more than just firm stares — they bring jokes, too.

“The school has just been happy and you can feel it,” another said.

In fact, Dads on Duty have been careful to emphasize they’re not on campus to act as security guards. “We’re not a security force in any way,” LaFitte told KSLA. “We’re just fathers who are changing the narrative.”

In comments to CBS, the dads said they felt their presence in the students’ lives may be especially beneficial to those who don’t have father figures at home. “Not everybody has a father figure at home — or a male in their life, period,” the dads said. “So just to be here makes a big difference.”

More Like This
Florida Teachers With “Unvetted” Classroom Books Could Face Felony Charges
Teacher Shot By 6-Year-Old Student Told School He Had A Gun, Was Told To "Wait"
Reddit Had Tons Of Advice For Mom Whose Husband Finds Parenting “Painful”
Reddit Backs Mom Who Got Scolded By Teacher For Not Inviting 30 Kids To Birthday Party
What Parents Are Talking About — Delivered Straight To Your Inbox