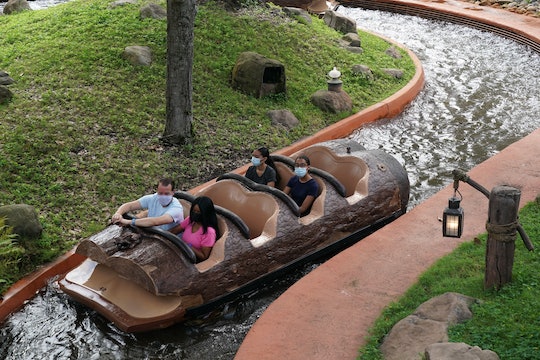 The park briefly tested photoshopping masks into ride photos so no one would appear to be without a mask.

Talk about the magic of photo editing. Walt Disney World was reportedly digitally altering ride photos to add face masks to guests who appeared to be either unmasked or wearing their mask incorrectly. The theme park reportedly began editing ride pictures after guests complained about a new park rule that prohibited guests from purchasing ride photos if a rider was without a mask or wearing a mask incorrectly. But although the photos were meant to encourage compliance, Disney World won't photoshop masks onto guests anymore.

When Disney World reopened to guests in July, the ongoing coronavirus pandemic meant the reopening came with a series of new rules. Among those new rules is the park's mandate that face masks be worn at all times unless eating or swimming. To encourage compliance on rides, Disney World instituted a new policy that said professional attraction photos such as a snap of riders zipping through Splash Mountain would be withheld from guests unless all riders were photographed wearing face masks.

But according to The Washington Post, some guests began lobbying to purchase their withheld photos, claiming their masks had slipped or fallen due to the fast and bumpy nature of some rides. That's reportedly when the park began digitally altering ride photos by adding masks to the faces of riders whose mask may have shifted or fallen off.

Walt Disney World News was among the first to pick up on Disney's photo editing after spotting an altered ride photo in the private Facebook group Disney World Junkies. "Got all of our photo pass photos from yesterday except Dinosaur," Walt Disney World News quoted one Facebook user as having written in a post to the group. "Just finally got it and you can see Disney has already started digitally adding masks so everyone can still get their photos. The woman behind us apparently wasn't wearing hers."

In the photo shared, a black digitized mask appears to have been stretched across the mouth and nose of a woman sitting in the back row of the ride.

In statements given to both USA Today and The Washington Post, Disney confirmed it had been altering guests' ride photos as part of a test, but wouldn't continue to do so. "In response to guest requests, we tested modifying some ride photos," Disney spokesperson Jacquee Wahler told USA Today. "We are no longer doing this and continue to expect guests to wear face coverings except when actively eating or drinking while stationary." Romper has reached out to Disney World for further comment but did not receive an immediate response.

According to The Washington Post, the park had temporarily been editing attraction photos in an attempt to allow all riders to purchase a ride photo without said photo showing a parkgoer in violation of Disney World's rules. Going forward, however, the park will no longer attempt to add digitized masks to unmasked riders and will instead continue to enforce the park's rule prohibiting unmasked riders from purchasing a ride photo.

More Like This
New Study Finds Brains Of Teens Who Lived Through The Pandemic Aged Faster
Viral Reddit Post Asks If A Toddler Can Watch Cartoons Without Headphones On A Plane
The 5 Best Cup Holders For UPPAbaby Vista
Pinterest Predicts Their Top 2023 Trends In Parenting, Beauty, Fashion, Home, & More