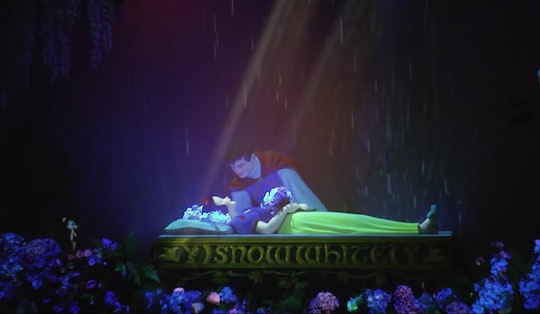 A kissing scene straight from the 1938 animated film has some concerned that Disneyland is giving kids the wrong idea about consent.

Disneyland has inadvertently sparked some debate over the issue of consent after revamping its Snow White ride. Two editors from the San Francisco Chronicle have criticized the theme park for choosing to include an animation of Prince Ferdinand kissing Snow White as she lies unconscious under an enchanted spell in the ride, claiming the scene represents a non-consensual kiss and sends a problematic message to kids.

During the park’s closure due to the coronavirus pandemic, Disneyland revamped one of its earliest rides, Snow White’s Scary Adventures, to include new audio, updated animations, laser projections and brighter colors thanks to LED lights. Now named Snow White’s Enchanted Wish, the attraction also leads riders through a more complete storyline. Where the original ride ended abruptly with the death of the evil queen, the new ride includes a happy ending that’s more in line with Disney’s 1938 animated film. In it, riders see Snow White brought out of the enchanted spell placed on her and enjoying her “happily ever after” with her prince.

But Katie Dowd and Julie Tremaine of the San Francisco Chronicle have argued that the kiss that awakens Snow White is more problematic than feel good. They describe the kiss as one the prince gives to Snow White “without her consent, while she's asleep, which cannot possibly be true love if only one person knows it's happening.”

“Haven't we already agreed that consent in early Disney movies is a major issue?” they continued. “That teaching kids that kissing, when it hasn't been established if both parties are willing to engage, is not OK? It's hard to understand why the Disneyland of 2021 would choose to add a scene with such old fashioned ideas of what a man is allowed to do to a woman.”

On social media, however, not everyone agreed with Down and Tremaine’s take on the ride. “Anyone with an issue of ‘true love's kiss’ breaking the spell should maybe avoid Disney theme parks altogether,” one Twitter user wrote in response to criticism of the Snow White ride. “I have children, it's my job to put things into context. Stop being so lazy that you blame society for all your parenting woes!”

Others argued consent is implied as the kiss is a rescue maneuver and without it, Snow White would be left in an unconscious state forever. “This notion of consent in Snow White seems to be going around a lot lately,” Faith Moore, author of Saving Cinderella: What Feminists Get Wrong About Disney Princesses And How To Set It Right, tweeted. “But I'd argue (and do in my book) that Snow White would readily give her consent to be kissed since not kissing her would condemn her to eternal sleep.”

Dad and former Blessthefall drummer Matt Traynor also expressed frustration with Dowd and Tremaine’s criticism. “I’m sorry, this is what’s wrong with the world,” he tweeted. “Snow White, a fictional character getting brought back to life by a kiss by her future husband. Y’all taking things too far and ruining the gullible by making them believe this is what to flip out about instead of REAL issues.”

To see the kiss everyone is talking about for yourself, you can take a virtual trip through Disneyland’s revamped Snow White ride here.