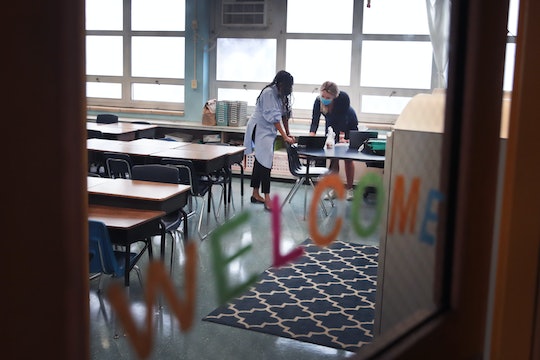 Doctors Stress How Important It Is To Keep Schools Open. Many Teachers Aren’t So Sure.

The closure of Chicago’s public schools are just one example of how complex the current debate has become.

A vote to approve a temporary switch to remote learning by the Chicago Teachers Union has thrust the debate over the safety of in-person schooling during the pandemic back into the national spotlight. While district administrators and some doctors have stressed the importance of keeping schools open, many teachers have voiced concerns about what they feel to be unsafe conditions, including inadequate testing, tracing, ventilation, staffing, and other poorly enforced mitigation strategies.

But does shuttering schools make sense?

Citing inadequate staffing levels and testing resources, the Chicago Teachers Union voted late Tuesday to return to virtual instruction amid a surge of Covid-19 cases. Chicago Mayor Lori Lightfoot and administrators at Chicago Public Schools, however, have insisted that students need to remain inside classrooms and have deemed the union’s vote to be equivalent to “a work stoppage.” According to NPR, more than 300,000 students found themselves without instruction of any kind on Wednesday due to the district’s decision to cancel classes. What’s more, educators who attempted to log in to remote teaching platforms found they’d been “locked out,” according to the Chicago Teachers Union.

But while the Chicago Teachers Union has demanded increased mitigation efforts, including a negative Covid-19 test from students prior to a return to in-person learning, city health officials have argued a very different approach is necessary, one that does not frame Covid as a serious threat. In an interview with WTTW, Chicago Department of Public Health Commissioner Dr. Allison Arwady maintained that schools were not superspreader locations.

“I am not concerned about being in school because school itself doesn’t increase the risk of Covid-19 infection,” Arwady said. “Between children being unlikely to have severe outcomes, especially if they are vaccinated, and staff — if they are vaccinated, especially if they are boosted — having an almost zero risk of being hospitalized or having severe illness, it really is concerning to me that we’re pretending like it’s February 2020, at the beginning of all of this.”

Arwady argued that only 15% of children currently in Chicago hospitals were there because of Covid-19. “The other 85% have other illnesses,” Arwady told WTTW. “And we don’t upend school, we don’t stop for influenza.”

A report from the CDC found that “although outbreaks in schools can occur, multiple studies have shown that transmission within school settings is typically lower than — or at least similar to — levels of community transmission when prevention strategies are in place in schools.” Schools are not, however, zero risk locations. The same report noted “significant secondary transmission of SARS-CoV-2 infection has occurred in school settings when prevention strategies are not implemented or are not followed,” and cited an incident in Israel where mask requirements were lifted and classrooms were overcrowded and without good ventilation, leading two asymptomatic students to infect 153 students and 25 staff members.

Recent data from the Illinois Department of Public Health, which breaks down Covid-19 cases by potential exposure location, showed schools as being responsible for the largest number of cases. And although severe illness due to Covid-19 appears to be uncommon in children, they’re certainly not immune to the virus. In fact, pediatric Covid-19 cases hit a record high the week ending Dec. 30, according to data from the American Academy of Pediatrics (AAP). A total of 325,340 children tested positive for Covid-19 that week, representing a 64% increase from the cases reported the week prior.

Still, the AAP has strongly recommended in-person learning, noting that “children are at higher risk of suffering mental health issues and developmental setbacks if they miss out on in-school learning.”

But Arwady isn’t the only doctor to maintain that schools remain safe. In an interview with CNN last week, Chicago pediatric infectious disease physician Larry Kociolek said schools were often safer than the community when it came to transmission rates. “I think generally schools are very, very safe and oftentimes safer than the community,” Kociolek said. “We saw last year in Chicago that cases spiked between Thanksgiving and the New Year and as soon as schools started, cases in children declined.”

Kociolek argued that mitigation strategies like masking, testing, and contract tracing had been proven to prevent transmission. “I’m confident that school is very, very safe,” Kociolek told CNN on Dec. 28. “And as a parent, I plan on sending my children back to school without concerns of transmission.”

Physician and media commentator Dr. Leana Wen has also argued that schools should remain open amid the Omicron surge. “Yes, schools should stay open,” Wen tweeted Tuesday. “This is not 2020 or 2021. Omicron is a milder variant, and there are highly effective tools now (i.e. vaccination + masking). Teachers and students are far more likely to be infected at social gatherings, restaurants, etc than at school.”

Of course, Chicago isn’t the only school district grappling with how, or even if, to keep schools open to in-person instruction amid the latest surge of Covid-19 cases. For many, the most immediate challenge is not the threat of infection but making sure there are enough teachers in the classroom. Across the country, the omicron-driven surge of Covid-19 cases has led to serious staffing shortages at a number of different school districts. In some areas, staff shortages have been so severe schools have been forced to temporarily move to virtual learning. Overall, Burbio, an organization that tracks individual school and district pandemic-related closures, has reported at least 4,561 schools have closed to in-person learning as of Tuesday. According to NPR, that includes Chicago Public Schools as well as schools in Georgia, Michigan, New Jersey, New York, Maryland, Pennsylvania, and Wisconsin.

Still, there are well over 100,000 K-12 schools in the United States, meaning a majority of schools remain open for in-person learning, according to Burbio’s count. That could change in the future, however, as a recent survey conducted by the National Education Association found that 32% of the association’s members said they planned to leave the profession earlier than they’d initially anticipated due to the pressures of the pandemic.

“My favorite thing about being a teacher in America is being demonized for wanting a safe work environment and adequate funding,” one Boston area teacher shared on Twitter. “Now if you would excuse me, I have to go do my job with zero budget for supplies the 5th year in a row.”

More Like This
13-Year-Old Makes History As Youngest Black Person To Be Accepted Into Medical School
New York Can End Religious Exemptions to Vaccine Mandates, Says A Federal Appeals Court
7 Questions To Ask Your Child's Kindergarten Teacher
Yes, You Should Work On Sight Words. No, You Don't Have To Stress Out