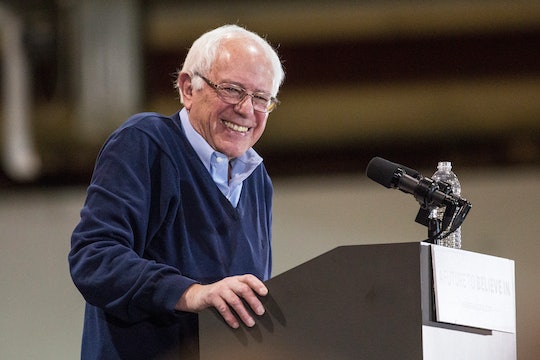 Bernie Sanders' Kids Have Followed His Footsteps Into Politics

Here's what you should know about the rest of the family.

As the 2020 presidential race begins to heat up, voters want to learn more about the Democratic candidates. And while Vermont Sen. Bernie Sanders might be a familiar political figure, his personal life is often overlooked, which is why some voters might be curious to know whether Bernie Sanders has kids. As it turns out, Sanders' children are following in his political footsteps.

As Sanders tells it, he likes to "stick to the facts," leaving much of his personal life under wraps. But one can't help but wonder what family life is like for Sanders, who happens to be the longest serving independent member of Congress in American history, according to ABC News.

Sanders has four children — one biological child and three step-children. And long before he met his current wife, Jane Sanders, he and and his former girlfriend, Susan Mott, welcomed a son named Levi into the world.

In Levi's case, it looks like politics runs in the family, and his political ideology is almost identical to his father's. This is something Levi freely admits, telling Vice News: “The basic difference is that I’m a vegetarian and he’s not.”

Levi ran for Congress in New Hampshire's first district, but he didn't win. And after his failed run, Levi stuck with the whole politics thing and served as Senior Political Strategist for his father's 2016 presidential campaign, according to The Washington Post.

As for Sanders' step-kids, whom he shares with Jane, they include: Carina Driscoll, Heather Titus, and David Driscoll.

Following in her step-father's footsteps, Carina Driscoll also fell in love with politics. She served as a State Representative in the Vermont House of Representatives for the Chittenden District from 2000 to 2002, according to . Carina then entered the mayoral race in Burlington, Vermont last year. Despite her loss, the race had special meaning as the Burlington Mayor position was responsible for launching her step-father's political career. He was reelected to the post three times and served from 1981 to 1989, according to The Atlantic.

As for Heather Titus, she's successful in her own right. Not only is she the owner of My Sedona Yoga, she produces the yearly Sedona Yoga Festival, according to the Verde Independent. And while she might not be directly involved in politics, it's clear her father's political messages of hope and community have resonated with her.

"I was brought up in a family that was about building community. I was really empowered as a young person in Burlington at that time," she said, according to the Verde Independent. "We felt like we could do anything we could think of. We felt we had a voice."

Next up is David, and it's clear Sanders has had a big influence on his career. David directed the Arts and Culture team for Sanders during his first presidential bid, and he also formed the Art of a Political Revolution, which showcases Sanders-inspired artists.

David also served as the co-founder and executive director for the Sanders Institute, a progressive think tank that sought progressive solutions to economic, environmental, racial and social justice issues, according to the organization's website.

It's unclear whether Sanders will win the 2020 election, but what's clear is politics runs in the family. And I can't wait to see what his talented kids do next.