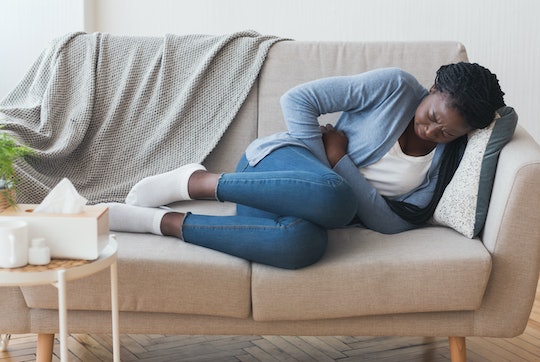 Does Everybody Have Pain During Ovulation, Or Are You Just Cursed?

A friend of mine used to grab her side and cringe from time to time, muttering something about ovulation pain. I never understood what on earth she meant. With this in mind, does everyone experience ovulation pain? It's definitely a real thing for many people.

But does everybody feel a physical sensation when ovulating? "Not everyone who ovulates will experience pain during ovulation. Many women do not have pain at all," Camille A. Clare, M.D., Associate Professor of Obstetrics and Gynecology, New York Medical College, tells Romper. Feeling no discomfort (or much of anything, really) at the time of ovulation is not a cause for concern. "If you aren’t feeling ovulation pain, it’s okay. Not every woman who ovulates feels it," Dr. Susan C. Tsai, a minimally invasive gynecologic surgeon at Northwestern Memorial Hospital, tells Romper.

If you want to know whether a particular feeling is associated with ovulation, then pay attention to the timing. "Mittelschmerz is the pain or discomfort that occurs with ovulation, releasing an egg," says Dr. Tsai, who adds that that the pain might occur on whichever side is associated with the ovary that just ovulated. "It occurs about midway through a menstrual cycle, with the cycle beginning on the first day of bleeding." For people with a regular cycle, the timing will likely be consistent. "Some women may experience pain 14 days before their periods," says Dr. Clare.

For those who do experience ovulation pain, it's often described in a variety of ways. "Ovulation pain most commonly starts as a dull ache which then intensifies. In some women, a sharp stabbing pain is felt," says Dr. Tsai. "The pain can be quite sudden and mild like a twinge to more of a dull cramping. It is usually on one side or the other in the lower abdomen," as OB/GYN Dr. Ann S. Collins tells Romper. All experts reinforced the idea that the pain associated with ovulation is generally mild, so severe pain should be investigated by your doctor.

Experts are still unclear about why ovulation pain occurs. "No one knows exactly the cause of the pain, but when the egg is released from the ovary there can be some fluid released and possibly a small amount of blood," explains Dr. Collins. Together, the fluid and blood can cause mild irritation in the pelvic area, and this may be the cause of pain, as Dr. Collins further explains. As long as you're only experiencing mild pain (or none at all), then it's likely just a normal part of the whole ovulation process.

Dr. Ann S. Collins, an OB/GYN with Centre Obstetrics and Gynecology who practices at UNC REX Hospital in Raleigh, NC

More Like This
Is Vape Smoke Bad For Pregnancy? Experts Explain The Risks
Why Your Vagina Smells Like Fish & What To Do About It
Why Does My Baby Cough While Breastfeeding? Experts Explain
Diastasis Recti Exercises You Can Do At Home To Heal Your Abdomen
What Parents Are Talking About — Delivered Straight To Your Inbox